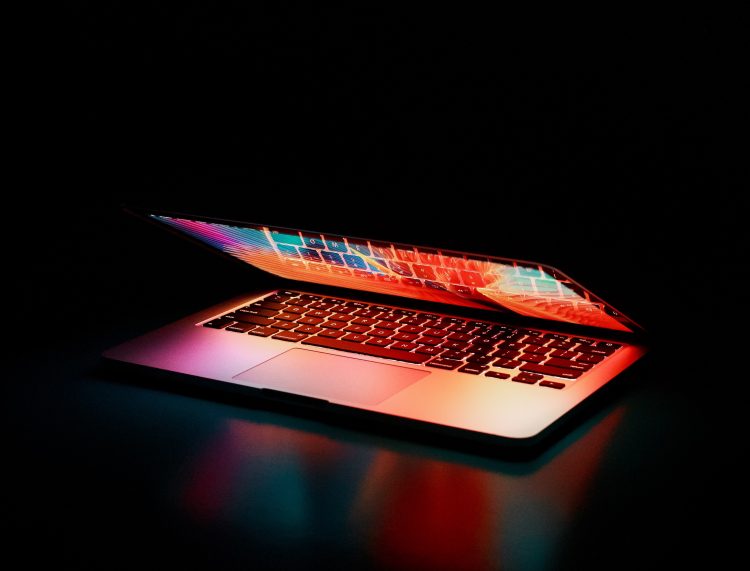 The VOX-Pol Blog was launched in October 2014 and has since become one of the most visited and shared features of the VOX-Pol website. At the outset, the aim of the Blog was to publish short-form original research directly related to online extremism, online terrorism, online radicalisation, and available responses to these. The Blog posts weekly on Wednesdays and takes a break in August, when we share the most-read posts of the previous 12 months.

Since it began, the Blog has posted 326 original and re-published articles and summaries of peer-reviewed papers. The combined page views for all the Blog posts has reached a total of just under 150,000. Readership built steadily over the years, and some recent posts have reached over 10,000 views. Table 1 shows the top ten most-read VOX-Pol Blog posts since the Blog began.

The editorial aims of the VOX-Pol Blog are to reflect the landscape of online extremism research and to respond quickly to current events. Have these aims been reached? This retrospective has surveyed the primary topics of the VOX-Pol Blog posts by quantity (number published) and by readership (page views).

The blog had its debut in the academic year 2014/15 and opened with an article about the ethics of blocking the Islamic State’s Online Propaganda. During the first year of existence, entries The Online Life of a Modern Terrorist and Leaving ‘Paradise’ for Jihad were the most visited. In the following years, entries on the topic of ‘violent Jihadism’ were most frequently published and garnered the most views: Wilayat Twitter and the Battle against Islamic State’s Twitter Jihad (2015/16), The Mighty Application that ISIS Loves – Part I (2016/17), Online Jihadi Instructional Content: IS’s Rumiyah in 2017 (2017/18).

In 2018/19, the most-read post was The Curation/Search Radicalization Spiral, and the most popular posts of that year included fewer ideology-specific posts and more on topics such as resilience, echo chambers, and content moderation. The Blog’s highest readership was 2019 to 2020 with titles like Is ISIS Dead or Alive?, It’s Time to Save Incels from Themselves and Gab.com: the Pro-Trump Alternative to Social Media, showing audience growth across a variety of topics.

The majority of ideology-specific Blog posts published between 2014 to 2018 related to the topic of violent Jihadism. This mirrored the real-world activity of the so-called Islamic State, which was declared in 2014 and reached its online peak in 2015-2017.  From 2017 onwards, posts about the extreme and far right increased, reflecting the rise in far right attacks. Entries such as Is ISIS Dead or Alive? and the high engagement with extreme-right content, especially in 2019/20 and 2020/21 gives an indication of today’s concern about the rise of right-wing groups in Western societies. Topics such as ethics and research methods have appeared consistently each year since 2014. See Figure 1 for an overview. 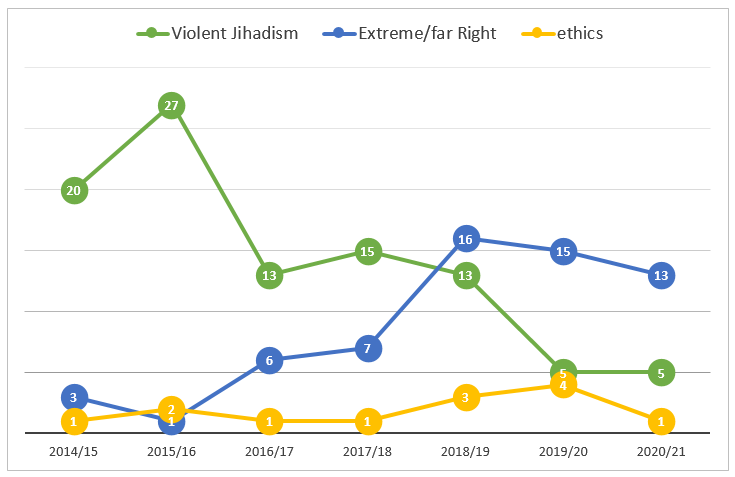 Social media and its influence on online radicalisation has been a common topic over the years. Blog posts related to content moderation have been consistently featured–see HERE, HERE, and HERE–and attracted high levels of engagement. Whether content moderation as a response to online extremism will work in the long term, and the potential freedom of speech consequences of taking down content, has been the centre of attention of many entries too.

Regulation — both at state level and within Internet companies — has also been a concern of academics, policy makers, and industry and thus reflected on the Blog. Entries such as The Terrorist Content Analytics Platform and Transparency by Design and One Database to Rule Them All describe and discuss efforts to tackle the problem of online extremist and terrorist content online. Attempts to legislate in this area, such as the German Network Enforcement Act (NetzDG) which came into law in 2017, the EU’s regulation on online terrorist content, and the EU’s Digital Services Act proposal, have all been examined on the Blog too.

Looking to the future, new movements and issues seem to be growing in popularity in Western societies and are starting to be reflected on the Blog. For example, contributions about incels appeared in 2019, 2020 and 2021, and posts examining terrorist’s use of games and gamification were published in 2020 and 2021. QAnon did not receive attention on the VOX-Pol Blog until its link with the storming of the US Capitol on 6 January, 2021. It remains to be seen whether these recent trends will continue into the future. However, it is certain that the perennial problems of content moderation and digital rights are here to stay.

Isis Garrigos is in the process of completing an MA in Cybercrime and Terrorism at Swansea University. She is also an intern at The Counterterrorism Group.