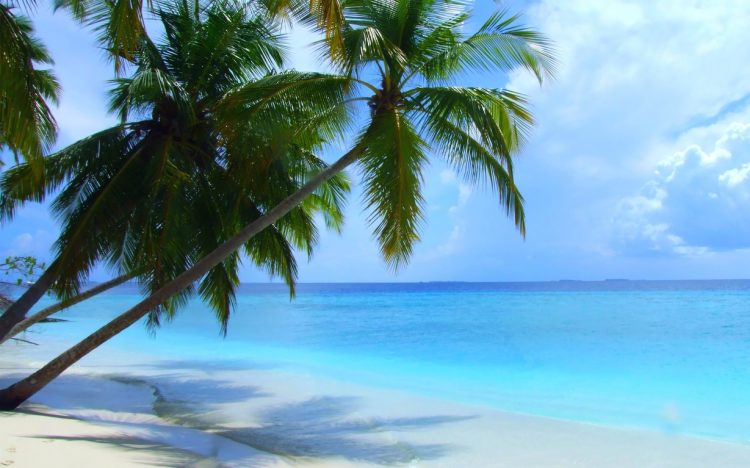 The Maldives adopted Islam as its official religion in 1153 CE and is a ‘100 per cent Muslim country’ with a Constitution that stipulates a non-Muslim cannot be a citizen. Despite the long history of being an Islamic society, and laws that forbid even foreign residents from openly practising any other religion, the Maldives is rarely included in existing literature on Islamic societies. When it does figure in the consciousness of the outside world in modern times, it is as an exclusive tropical holiday destination of incomparable natural beauty. Yet, the 200 or so of its 1200 islands inhabited by 390,000 Maldivians, are microcosms of the many debates and conflicts that dominate international relations and world affairs today from democracy and human rights to religious revivalism in the form of Revolutionary Islamism. It is on the increasing Islamism in the Maldives, the most extreme form of which has manifested itself as a large number of Maldivians joining the war in Syria—and to a lesser extent in Iraq—that this post focuses on. 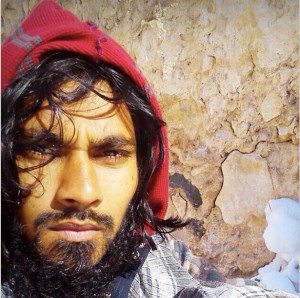 ‘Abu Nuh’, one of the first Maldivian fighters reported to have died in Syria

Maldivian fighters in Syria first made news about a year ago, when Bilad Al Sham Media—a group which claims to be the official media representatives of Maldivians in Syria—reported the death of Abu Turab[1], a 44-year-old man from an island in the middle of the Indian island archipelago. News of Abu Turab’s death was quickly followed by the reported death of a Abu Nuh[2], a man in his twenties from the capital island of Male’.

Since then, there have been about a dozen reported deaths, averaging about one every month. In between news of the deaths have been increasingly frequent reports about Maldivians leaving to join the ‘Jihad’ in Syria. While official figures say there are a total of about 50 Maldivians fighting in Syria, the number is more likely to be twice as much. A new trend, noted from the beginning of this year, are large groups of Maldivians—from six to 10—leaving for Syria together. These groups have included babies less than a year old, a girl aged 11, a number of women in their 20s to mid-40s, and men aged anywhere between 18 and late 40s.

How are people from islands so isolated from the rest of the world, and of such little geo-strategic consequence to international affairs, being drawn into this conflict of global significance? The Internet has been a chief facilitator.

Democracy and widely available Internet arrived in the Maldives around the same time—in the first decade of the 21st Century. With both came freedom and exposure to the outside world to an extent Maldivians had not known before. Into this heady mix was introduced the unavoidable, globally felt, impact of the War on Terror. With funding made by available by radical Islamic sources that believe the War on Terror is one waged by ‘the West against Islam’, Maldivian Revolutionary Islamists soon set in motion a religious revival programme that, within a decade, has almost entirely obliterated the centuries old moderate Islam practised in the island nation. It would be hard to claim that this rapid change could have been made possible without the Internet.

43% of the Maldivian population, about 170,000 people, are active social media users, the highest number in South Asia. To put things into perspective, only 9% of the population neighbouring Sri Lanka is active mobile social media users. India, another close neighbour, has a social media penetration of only 7%. Given this high level of Internet usage in the Maldives, and considering the worldwide role of the Internet in facilitating radical religious ideologies, it is not surprising that disseminators of such ideas have embraced social media zealously.

A large number of Maldivian religious organisations and individuals that disseminate Revolutionary Islamist ideologies are on social media. Their narratives carry the recurring tropes depicting Maldives as ‘a land of sin’; and a beleaguered Ummah at war with Infidels. While many of the Sheikhs engaging in this rhetoric stop short of openly encouraging Maldivians from joining ‘Jihad’, these tropes are reflected in the reasons given by Maldivian and other foreign fighters for travelling to Syria and Iraq. 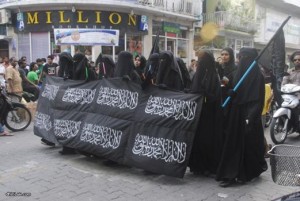 A pro-Sharia march in 2013. Campaigning for strict implementation of Sharia is a common activity among online disseminators

A popular medium of communication for religious civil society organisations is Facebook. The five most popular such organisations in the Maldives have at least 10,000 supporters (Likes) each, some have over 20,000[3]. All of them share a common communications strategy: provide people with easily ‘digestible’ messages they can share with others via social media. A common tool for this is bite-sized ‘info graphics’ – a roughly 4×4 inch picture on which are superimposed various Hadith or verses from the Qur’an translated into Dhivehi. These info graphics are seen, read, and interpreted by thousands, influencing their religious discourse on and offline. Most religious NGOs on Facebook are present across the entire spectrum of social media platforms: Facebook, Twitter, Instagram, YouTube, Flickr, Ask FM, and others. The NGOs organise a large number of offline activities throughout the year. Chief among them are regular lectures at mosques across the country, Da’wah camps to invite people to answer the Call of Islam, Tazkiya Camps, Taw’heed camps in addition to lectures across the entire length and breadth of the country.

These activities are conducted all year round, and increase in number during school holidays. In the lead-up to a planned event, they are advertised on Facebook. Once they occur, photographs are uploaded on Instagram, Facebook, and Twitter. They are also live broadcast on dedicated radio channels and are live streamed on other social media and Internet platforms. Video clips are uploaded on Facebook and Vimeo; there is full social media saturation.

In addition to the NGOs and other civil society organisations, a large number of clerics, not all of them espousing radical or violent ideologies, communicate with the population via Facebook. They, too, count their Facebook supporters in tens of thousands, and the number increases rapidly almost on a daily basis [See Table 1]. 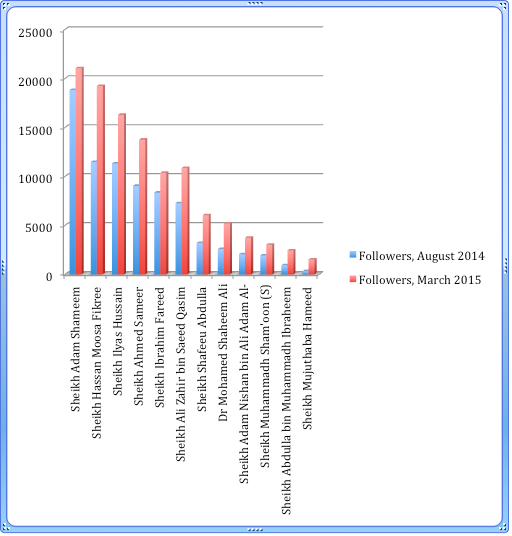 The main cause for concern is a new type of preacher—someone (often has with little religious but) who is good at performance and theatrics—that has emerged to dominate Maldivian religious landscape in the past decade or so. Almost all of them have strong social media presences.

The most popular, Sheikh Adam Shameem, has 21,000 Likes on his Facebook Page, a figure which means close to 6% of the entire population has ‘Liked’ the Sheikh. There are a dozen them whose popularity can be measured from 1000-21,000 Likes on their Facebook Pages[4]. Some of the Sheikh Shameem’s performances are reminiscent of theatrical Evangelical churches in the United States. Shameem’s media profile is typical of popular preachers. He has a website, a Facebook Page, a Twitter handle; an Instagram account; a YouTube Channel; and an NGO (also online) that promotes all his activities. All the Sheikh’s lectures are advertised on all his social media platforms and video-taped, and full lectures are made available on YouTube. The lectures are also downloadable as audio files. Backing up this strong appearance online is traditional media, radio and television which often broadcast the lectures live. Not to be forgotten is Internet live streaming of the events.

There are also several websites that are disseminators of Revolutionary Islamist ideologies encouraging hatred of non-believers and calling on Maldivians to unite against them, waging war if necessary. Chief among them is Haqqu, dedicated entirely to the promotion of ISIS. Haqqu is a website launched in August 2014, shortly after the proclamation of the Islamic State in Iraq. It began with a Facebook Page, which was launched on 5 August 2014. The Facebook Page is still in operation, and at the beginning of March, had over 800 Likes. It has several articles and books in the local language, Dhivehi, that promote Jihad and ISIS including a biography, or more accurately a hagiography, of Al-Baghdadi, the Caliph of Islamic State (28 September 2014). 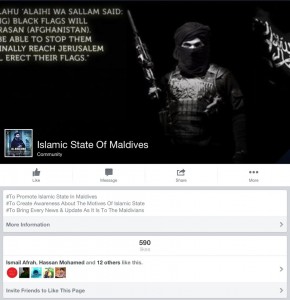 Also noteworthy among the websites is Bilad Al-Sham Media, which describes itself as the official media representative of Maldivians fighting in Syria. It was started on 15 August 2013. The Bilad Al Sham website is entirely dedicated to Jihad-related news, literature and discussions. Most of its content is written in English. Until recently, it was meticulous in providing ‘biographies’ of the Maldivians who are ‘martyred’ fighting with Jabhat Al-Nusra. They made available, for example, the biographies of Abu Dujanah Al Maldeefee (18 November 2014), ‘Maldivian Martyrdom Bomber’, Abu Turab (15 June 2014) and Abu Nuh (1 June 2014). They were all written by Abu Ayyub Al Maldifi, based in Syria.

A look at Facebook Pages Maldivians in July and August of 2014, shortly after the death of the first Maldivian fighter in Syria, and following the proclamation of the Islamic State, revealed broad support for Jihad and ISIS among many. Many began using ISIS/IS related insignia or pictures as their Cover Page during this time while many others used material associated with other Jihadis, such as the black flag used by fighters with Jabhat Al-Nusra—with whom most Maldivian fighters in the region are affiliated. Many also adopted the black flag of IS as their logo/cover picture or had a black flag with the Shahadath printed on it in white, preferred by Al-Nusra. Some that did not have either, had pictures of warriors on horseback fighting in the desert with swords. An examination of 100 Profile Pages of individuals who adopted one or more of the above features showed that people from all works of life in the Maldives support the idea of ‘Jihad’.

The above analysis provides a small glimpse into a much larger picture of the on-going religious revival in the Maldives led by Revolutionary Islamists, facilitated by the Internet and social media. The most extreme form of the activities described above is manifested as increasing numbers of Maldivians leaving for ‘Jihad’ in Syria. They live, and die for, the ideas they are introduced to, or learn more about, via the Internet. The changing religious and socio-political landscape of the Maldives, though rarely studied, offers interested scholars manifold opportunities to increase their understanding of the relations between religious ideologies and the Internet, and their impact on some of the biggest security issues facing the world today.

[3] It should be noted here that several of the popular organisations dedicate themselves solely to governing the conduct of the Muslim self, rather then address broader issues like violent Jihad.

[4] It should be noted here, also, that not all of the clerics listed here in order of their Facebook popularity, are known to support Jihad.

A longer version of this post was published on Jihadology.net on 11 March 2015

Azra Naseem is a Postdoctoral Research Fellow at the School of Law and Government, Dublin City University.