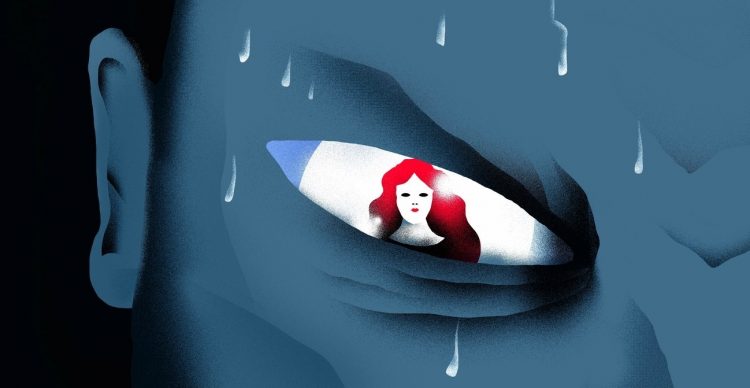 Incels are a danger to society and to themselves. Technology has made the problem worse, but it can also help fix it.

Involuntary celibates, or incels, believe that a socio-genetic conspiracy theory is preventing them from having sexual relationships with women. Denied their right to sex because society has deemed them unworthy, some of their members have retaliated with mass murder.

While their views are reprehensible, they are also a community whose members regularly self-hate, self-harm and increasingly, take their own lives. We all need to recognise not just that incels are a danger to public safety, but also that they are a danger to themselves. Understanding their vulnerabilities creates opportunities for treatment and intervention, without diminishing the seriousness of the threat they pose.

Drawing on cultural motifs from the early 2000s Matrix movies, incels claim to have “been redpilled” and discovered the truth: there is a sexual marketplace in which genetically inferior men such as themselves are incapable of competing, and women are largely to blame. Women’s liberation has only aggravated this situation, they claim, since women no longer have to trade sex for safety and are no longer easily coerced into sex with undesirable men. Many incels recommend outlandish and sinister solutions to this problem, including government enforced sex; the revocation of womens’ rights; or a reduction in the age of consent to enable coercion of minors. The incel ecosystem is deeply embedded in online platforms like Reddit, Gab, YouTube, forums and the dark web.

Incel discussions online blend this fevered conspiracy with a toxic mix of misogyny, eugenics and racism. They portray women as incapable of empathy, love or critical thought; they gleefully discuss sexual assault; and they share tips on how to molest women in public. They debate the merits of travelling to impoverished countries for the purpose of exploiting vulnerable young women and girls (Venezuela is a current favourite) and they lionise incels who channel their sexual desperation into deadly action, including Elliot Rodger, who killed six people in Isla Vista, California in 2014, and Alek Minassian, who killed 10 people in Toronto in 2018.

Brandon Clark murdered influencer Bianca Devins by cutting her throat before posting the image of her body on instagram and 4chan. Prior to her death, Bianca had rejected Brandon’s advances and ridiculed his attempts to begin a relationship with her. On incel forums, many users applauded her murder as a justified response to her rejection of Brandon. Here a user with the avatar of Eliott Rodger (the Isla Vista killer and incel hero who murdered 6 people and injured 14 others) thanks Brandon Clark for Devins’ killing.

The incel threat requires both a public safety and a public health response. Through words and deeds, many incels present a threat to public safety. But the community is also plagued by depression and isolation. It is a concentrated online microcosm of the wider epidemic of male depression and suicide. Incels who show an interest in suicide are encouraged and praised as brave, while fellow incels bemoan their own weakness at being unable to follow the same path. By contrast, incels who are brave enough to express an interest in mental health services are bombarded with scorn and reminded of their inherent worthlessness: “therapy can’t fix your face.” Many incels have taken to posting their suicide notes online, turning forum feeds into a weekly reminder of the suicidal option.

It can be hard to muster sympathy for a community that espouses such bizarre beliefs and inspires such violence. But it’s worth remembering that this toxic community is essentially founded on self-loathing. More social rejection, exclusion and isolation will only make matters worse. Moreover, the walls of the incel echo chamber are self reinforcing. Once you’re in, it’s hard to leave without help. 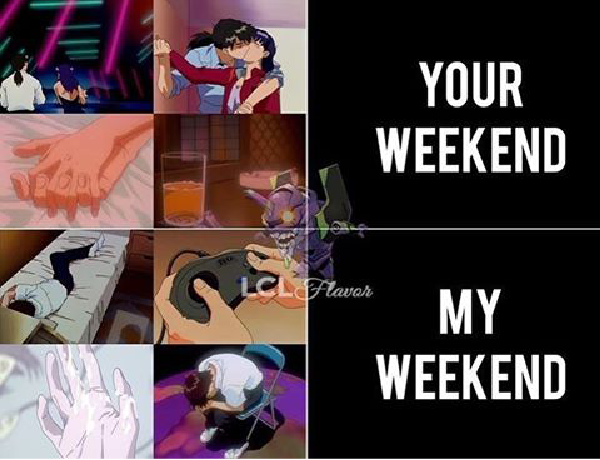 This post was titled “Another Friday. Another weekend of LDARing and…” Despite the ‘Lay Down and Rot’ lifestyle being admired by some incels, here it is contrasted with what incels’ see as ‘normie’ life: sex and intimacy. The poster depicts the LDAR lifestyle as consisting of loneliness and isolation.

Online isolation goes hand in hand with incel isolation and hopelessness in the real world. Why contribute to a society that has rejected you, an inferior and unlovable man? Many incels live and extol the virtues of the “NEET life” (Not in Education, Employment or Training) while also describing days of persistent, intense isolation, pornography consumption and forum-dwelling. Without the prospect of sexual intimacy, other activities like work, health and personal development seem pointless. Faced with no future, incels use forums to encourage each other to “LDAR” – Lay Down and Rot. The Internet offers incels one thin thread of social interaction, but more often than not, they use it to reinforce each other’s despair and isolation.

In response, websites like Reddit have quarantined incel subreddits that collect incel suicide notes and remember the ‘fallencels.’ Incels see this as unwarranted censorship and further evidence of society’s disinterest in their suffering. And indeed, society is doing little to prove them wrong – incels are not being presented with support services or treatment programmes and their communities are being driven off mainstream internet platforms, aggravating their grievances and making them even harder to reach. Opportunities to support incels are becoming more and more scarce as they migrate deeper into the dark corners of the internet.

This cycle of mutual victimization must stop. Developing a treatment programme collaboratively with governments, tech companies and public health professionals could be the answer to helping vulnerable men disengage from this toxic environment. Online, practitioners can work with platforms to develop constructive alternative approaches to quarantining or closing incel forums. At the same time, government should expand support to offline interventions programmes to tackle social isolation and mitigate this growing public health crisis. These programs should provide education, employment or training programmes adapted for incels to directly address the social isolation and depression exhibited by individuals living the NEET lifestyle. The incel ecosystem thrives – even depends – on the social isolation of its online spaces. It is therefore critical, both for its members and for public safety, that we work together to bridge the online-offline gap by getting incels the help and support they so desperately and self-evidently need. 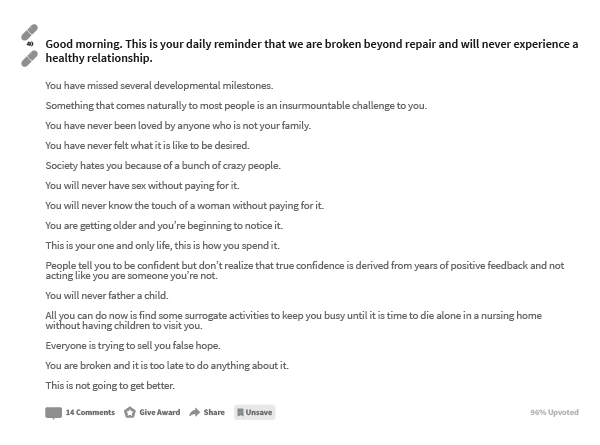 This is a typical example of the type of hopeless, shaming posts regularly uploaded to the Reddit incel page by self-identified incels. These regular ‘reminders’ of the immutable nature of their position in society feeds into a shared reality ruled by hopelessness and depression.

Similar to the previous post in its hopelessness, this is more of a call to action to the community. The poster weaves together theories on feminism, the revocation of civil and political rights, and citizenship to explain his inceldom. Without providing mental health support for members of this community, incels seek out alternative explanations, which often direct their anger and blame towards society at large.

This article was originally posted on Moonshot website. Republished here with permission.

Using Twitter as a Data Source: An Overview of Social Media Research Tools (2019)