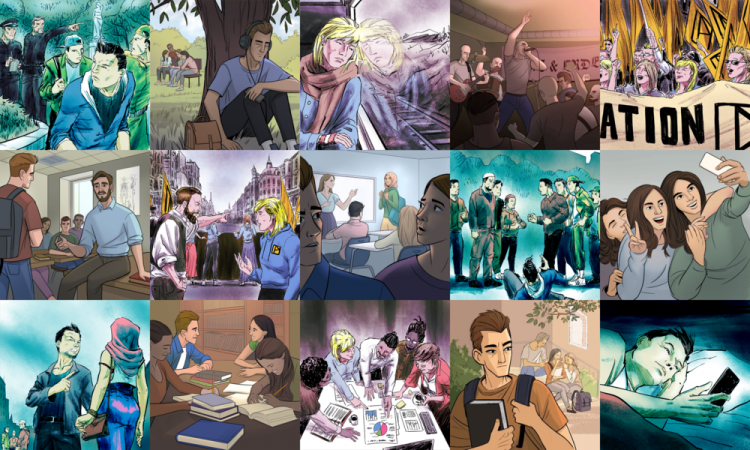 By Michael Hartinger and Daniela Pisoiu

Radicalisation and recruitment to violent extremism and terrorism occur in various ways and a myriad of rhetorical and visual elements have been used to that extent, increasingly online. Gamification and actual video games have recently increased in relevance, as Islamist and right-wing groups have recognised their potential for attracting young people to join. Games present a unique advantage in terms of outreach and persuasion: the ‘fun’ nature of the activity obscures or at least makes the extremist message less obvious. At the same time, games facilitate known mechanisms of radicalisation, such as positive feedback, socialization in a select and isolated community, achieving status and recognition within the same. But what about prevention? Can games be used to prevent people from radicalising, how can this be achieved and what are the challenges involved?

At the end of 2018, following the award of a grant from the European Union’s Civil Society Empowerment Programme, social scientists and a small game studio, Bloodirony Games, supported by a number of practitioners in Vienna initialised the conceptualisation of a webgame to tackle individual radicalisation and supply counter-narratives. The idea was to create an easy to use and accessible game that runs on every browser, computer or mobile device. The first decision that had to be made involved the type of game. It had to be something that on the one side illustrates the radicalisation process, and on the other presents the opportunity to engage critically with extremist propaganda. We eventually decided to work on interactive stories based on a core concept of repeated decisions.

This was anchored in a conceptualisation of the radicalisation process as a series of small steps involving individual decisions in certain situations with the expectation of gain. We could draw on this existing research, which was also confirmed through interviews with Islamist and right-wing (former) radicals which we carried out during the project. These interviews and others with youngsters in youth centres also informed the kinds of design and music preferences, which we then implemented in the game. Additionally, the analysis of contemporary Islamist and right-wing online content provided inspiration for the propagandistic visuals and messages included in the game. In the following we present some insights and lessons learned during the process of creating the game.

Finding a common language
Academic researchers think and work differently than IT people who work on games. We faced and overcame a couple of challenges. First, in order to get to a common understanding of how the game would look and feel early prototypes were made, validated, and discussed together. Working, discussing, and making decisions based on an unfinished game with very rough parts was something that the whole group needed to get used to and gain confidence in each other.

How ‘gamy’ should the game be?
One of the greatest challenges in the beginning was to determine how daring and ‘gamy’ the game should actually be. Games are always about risk and reward. Every action has consequences. In a jump and run, if you don’t jump you lose a life and need to do it again; or you collect points or coins that you can spend on something. This presented us with a dilemma: rewarding the decisions towards the negative path seemed problematic; rewarding positive decisions meant that players would not get to experience the radicalisation process, which would have been counterproductive. In other words: you want the player to experience the “wrong” or bad path, but you do not really want to encourage that it is wise to go there, either. We eventually decided to create an interactive, story-based experience with small playful distractions and content to read, see, and decide on. This concretised in a number of formats: chats, card swipes, timelines, videos, and minigames.

Finding the right tone
Later, during development, when we worked on the dialogue and text in the game, we struggled somewhat to find the right tone so that the text is believable and teenagers do not find it too forced. That was not an easy task and needed a lot of tweaking and testing.

Finding the visuals
We wanted to make sure that we found the right artists for the visual part of the game. To this end, we invited several local and international artists to create sample pieces, which we then validated with our target audience. That process was lengthy, but necessary. Opinions about art are always very diverse. We therefore worked with a rating system in several youth centres and also polled students and practitioners working with youngsters in order to find the best fitting artists for our game.

Finding the proper tools to work together in a team
When it comes to working together in a big team, digital tools, platforms, and services are very important. Given our different backgrounds, it was a challenge to agree on what tools to use and keeping to them. Eventually we decided on Google Suite for items such as reports, the educational material, the list of scenes extracted from the interviews; draw.io for writing the dialogues and the scripts; and during the last months Skype and Zoom for regular meetings. All of us use digital collaborative tools differently now than we did before we started the project.

Testing the prototype
To validate if we were on the right track, we wanted to have feedback from our target audience early on. Therefore, we organised focus groups with teenagers and young adults, took notes and validated them. We always had at least one technician and one researcher involved, so that we could focus on the content and the game feel at the same time. A challenge here was ranking what is important or just a one-time issue, something completely technical or even unsolvable.

The DECOUNT game is available free of charge in German here. The English version is coming soon.

Michael Hartinger is an Indie Game Developer and owner of Bloodirony Games, making games for all platforms since 2015. Twitter: @asebist

Daniela Pisoiu, PhD is Senior Researcher at the Austrian Institute for International Affairs and expert of the EU’s Radicalisation Awareness Network. Twitter: @DPisoiu

The DECOUNT project has received funding from the European Union.