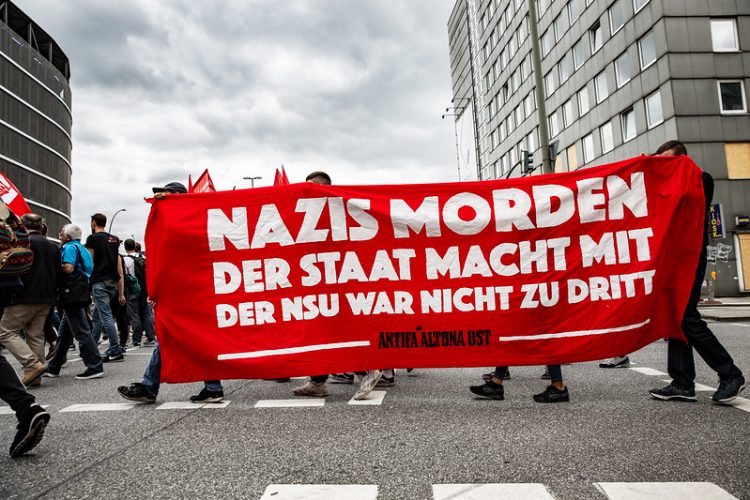 The rise of National Socialism, as well as the Second World War and its devastating consequences, for Germany and the whole world, has of course had a profound impact on the shape of the modern German legal system. The historical lesson learned from the possibility of extremist forces using the democratic system in order to rise to power has led to Germany developing, in part, a model of defensive democracy. The response can be seen in the creation of a strong constitution with checks and balances between the different branches of the state.

Understanding the importance of freedom of speech as an essential component in the democratic process has led to the inclusion of this right in the constitution, but in a dramatically different way to US constitutional protections.

The right to freedom of speech is protected by Article 5 of the German constitution, which declares that every person shall have the right to “express and disseminate his opinions in speech, writing and pictures, and to inform himself without hindrance from generally accessible sources”. But freedom of speech, like many other rights in the German constitution, can be limited by regular law in order to protect the constitutional state.

The historical lesson that was learned from the Nazi period about how dangerous propaganda and the incitement of anti-democratic forces can be to democracy has led to the German legal system’s intolerance of hate speech. The German Criminal Code includes several articles, dating from as early as the 1950s, which limit freedom of speech in the name of protection of democracy.

Section 90a forbids the defamation of the state and its symbols such as its flag while Section 91 forbids the displaying or supplying of material “which by its content is capable of serving as an instruction to the commission of a serious violent offence endangering the state (Section 89a (1)), if the circumstances of its dissemination are conducive to awakening or encouraging the preparedness of others to commit a serious violent offence endangering the state”.

In addition, Section 111 forbids the inciting or committing of an unlawful act “publicly, in a meeting or through the dissemination of written materials”, and Section 129a forbids the forming of a terrorist organisation.

Section 130, 130a and 131 deserve special attention as they all deal directly with limitations on publication. Section 130, which is entitled ‘incitement to hatred’ forbids the inciting of hatred against a national, racial, religious or ethnic group, forbids insulting someone based on being a member of one of those groups and forbids the public approval of, denying, or downplaying of an act committed under Nazi rule.

Section 130a forbids the dissemination, public display, posting, presenting, or the otherwise making accessible of material that is capable of serving as an instruction for an unlawful act and intended by its content to encourage or cause others to commit such an act.

A major part of these laws are enforced by a special security agency that is designated to protect the constitution from threats, the Federal Office for the Protection of the Constitution (the BfV).

With such a wide range of criminal laws prohibiting many forms of expression, laws which were mostly put in place prior to the rise of the Internet, it is no surprise that the German authorities have chosen the criminal law path to deal with online extremism. For example, the BfV’s 2018 annual report states that out of 36,062 politically-motivated offences in 2018, 14,088 were propaganda offences, which were mostly performed online.

The German fear of the power of extremist propaganda is understandable and the use of criminal law against online users is also common in other European countries, but the question remains, do criminal limitations on free speech really stop the spreading of extreme ideas, do they have the opposite reaction, or do they have no effect at all? As extremist ideas continue to flourish in many democratic countries around the world, regardless of various legal efforts, it is perhaps time to consider if the law is the place to find the solution.

This article is the third and final of the three part series. Click here for part 1 and 2.

From the French Revolution, the First Amendment and the Third Reich to Twitter and Facebook: The Impact of Legal Histories on the Fight Against Online Extremism – Part 2: The United States

Is ISIS Dead or Alive?