Welcome to Volume 6 Issue 4 of the VOX-Pol Newsletter.

The report How Extreme is the European Far Right? Investigating Overlaps in the German Far-Right Scene on Twitter was published in November, and launched —in print and online— at the final session of the VOX-Pol Lunch Briefing Series, Brussels. The report was written by Reem Ahmed, Researcher at the Institute for Peace Research and Security Policy at the University of Hamburg (IFSH) and Daniela Pisoiu who is a Senior Researcher at the Austrian Institute for International Affairs (oiip), Vienna. Reem Ahmed presented the report at the launch event in Brussels, which was live-streamed and is available to view on our YouTube channel. You can read it on our website HERE, or contact VOX-Pol via our website to request a hard copy. 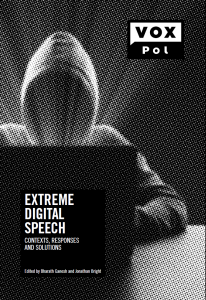 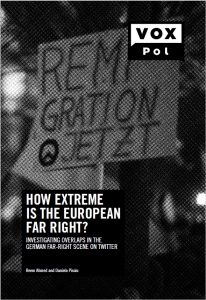 The Legal Response of Western Democracies to Online Terrorism and Extremism and its Impact on the Right to Privacy and Freedom of Expression, Nery Ramati

Inside the Black Box of ‘Terrorism Informatics’: the Costs and Benefits of Using Computational and ‘Big Data’ Methods, Matti Pohjonen

Ryan Scrivens and Maura Conway. 2019. The Roles of ‘Old’ and ‘New’ Media Tools and Technologies in the Facilitation of Violent Extremism and Terrorism in The Human Factor of Cybercrime, edited by Rutger Leukfeldt and Thomas J. Holt, Routledge Studies in Crime and Society, 11 October

During the Autumn, the VOX-Pol Network of Excellence hosted a series of Lunchtime Briefing Seminars, each exploring a different aspect of Violent Online Political Extremism. This is the third lunch briefing series following on from events in 2015 and 2016.

The 2019 Lunch Briefing Series took place in October and November and was a joint venture between VOX-Pol and the Representation for the European Commission in Belgium. It comprised six weekly sessions in the Press Club, Brussels and featured a presentation, a Q&A session, and a networking lunch. Sessions were on a wide range of topics. The presenters’ slides from each session are now available to download on our events page and all the presentations can be watched on our YouTube channel.

VOX-Pol attended the 2019 Security Research Event (SRE), which took place in Helsinki on 6 and 7 November. It was co-organised by the European Commission and the Ministry of the Interior in Finland as a side event of Finland’s Presidency of the Council of the European Union. The theme of this year’s SRE was ‘Building Bridges: Towards Increased Synergies Between Different Funding Schemes and Market Uptake’. The exhibition area spotlighted some 15 projects, displaying their inventive results.

The VOX-Pol stand featured our publications and the DCU coordination team was present to discuss the research. Additionally, our Coordinator, Professor Maura Conway (DCU), discussed the project at the ‘Speaker’s Corner’ on day two. 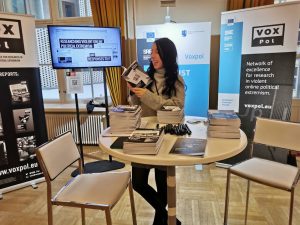 VOX-Pol Coordinator, Professor Maura Conway, is a partner on the BRaVE project: Building Resilience against Violent Extremism and Polarisation. The BRaVE Platform is now online, with:

Dublin City University, as part of the project consortium, has contributed to creating this full database of counter-extremism research, policies, projects and institutions which supports greater knowledge and sharing of counter-extremism practices between different European countries.

To learn more about the BRaVE Project – its aims, objectives and outputs – check out the website here. 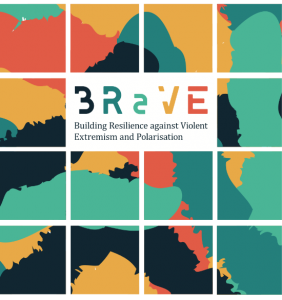 Crowdfunding and Cryptocurrency Use by Far-Right and Jihadi Groups