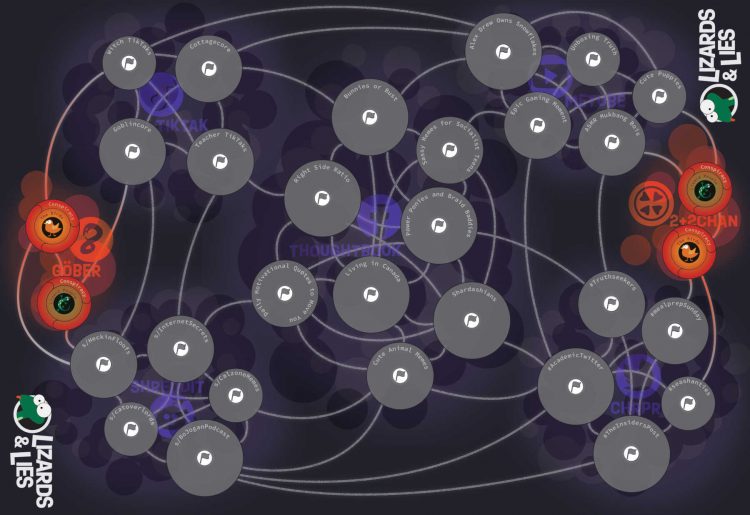 When it comes to understanding the Freedom Convoy and right-wing extremism, play offers a unique entry point.

A week into the Freedom Convoy, a new symbol for the occupation graced social media: a bouncy castle. The children’s play feature, at first, seems off-kilter for a movement whose arrival in Ottawa began with urinating on the National War Memorial and the and the occasional Nazi flag sightings at the rallies. The bouncy castle appeared a little more playful than these other symbols, but I argue that play is a critical part of the alt-right’s success in Canada. Whether it’s gaming algorithms, ironically posting arrest warrants or organizing a party on the occupied streets in front of Parliament, play is central to these movements.

There are many ways to explore this movement and the communities within it, but play is a unique entry point. It can be tempting to blame social media platforms and the algorithms—the computer code behind social media platforms—as the driving force behind the spread of radical ideas and communities. However, this ignores how online communities and the users in these spaces play with the system and with each other, as a way to build community and spread ideas.

To explore how play functions within right-wing extremist spaces online, I designed a game. Not the kind you might play with your grandparents during the holidays, but a simulation-style research tool meant to explore how information spreads through social media to form a movement and radicalize users. Titled Lizards and Lies, the board game is a research project that aims to translate media theory into playable research. It demonstrates how information travels through social media, where communities form around content, to eventually help create larger radical movements.

Using game design and play experiences challenges the most common approaches to studying these spaces in order to ask new questions and reveal new insights. From my observations of these communities, I recognize how integral play is, and, therefore, necessary to analyze. Lizards and Lies is a game-based method for starting this work. In gaming out these spaces we can start to understand the playful undertones to modern radicalization.

Not your family game night

When talking about play, I am talking about behaviour: this can include how we negotiate these rule systems, how we interact with others, and how we manipulate our environment. When you boil it down, games are just a system of rules and objectives that players agree to abide by. Social media are also systems, made up of algorithms and code which set the boundaries and objectives for participation. In many ways, social media can be thought of as a game, with the rules being codes of conduct and objectives including likes, follows, and retweets.

Play and games aren’t necessarily light and fluffy topics—they can be quite serious. In the case of right-wing extremism, playfulness can lead to radical and dangerous outcomes. Take for example QAnon: this conspiracy theory is committed to exposing an imagined global cabal and the purported pedophile rings of the elite (among other things). Deeply connected to the January 6 Capitol riots of 2021, QAnon uses puzzles to engage users and slowly radicalize them around its conspiracies. Communities formed around cryptic “Q-drops,’’ where the radicalization of users focused on finding the clues and piecing them together, rather than having a social media algorithm reveal it for them. For QAnon, play motivates engagement and conspiracy is the game—and the result is communities primed for ideological radicalization.

So what does this have to do with the Freedom Convoy and, more broadly, radicalization? Just like in QAnon, conspiracy theories were part of the Freedom Convoy movement, as were other playful practices. Take the inflatable, rainbow-coloured castle—a powerful visual which brought playground innocence to the movement. Families gathered, children bounced and a community was formed. The symbolism of children’s play lowered people’s guard around the movement and its ideology. In other words, play served as a participatory glue, a community-building act that connected people in what could have felt like a serious or tense space.
But how do we study play? One approach is to recreate the of the play in order to observe and record the behaviours.

Lizards and Lies models the phenomenon of “participatory glue” through a playable game. Its design aims to replicate the conditions within which right-wing radicalization occurs: including the networks of our media system, both the people and systems which form the messy data web of our online world. For the game, I replicated the main actors, human and non-human, that play central roles in right-wing online spaces. The roles that the game included were Fact-Checkers, Conspiracy Theorists, Meme Makers (content creators), Edgelords (provocateurs), Digital Literacy Educators and Content Recommendation Algorithms.
From playing Lizards and Lies, one thing was clear: our social media systems, and the movements within them, form an ecosystem. Each of the characters in the game influences one another. We can’t lay the blame for right-wing radicalization solely on one character.

The game was a helpful tool for seeing just how dynamic and interconnected people and technology are in social media spaces. It urges us to consider how individuals contribute to radicalization within these spaces. This is not to say that technology isn’t at fault. But blaming a single component, like algorithms, will never succeed in addressing the issue of radicalization. 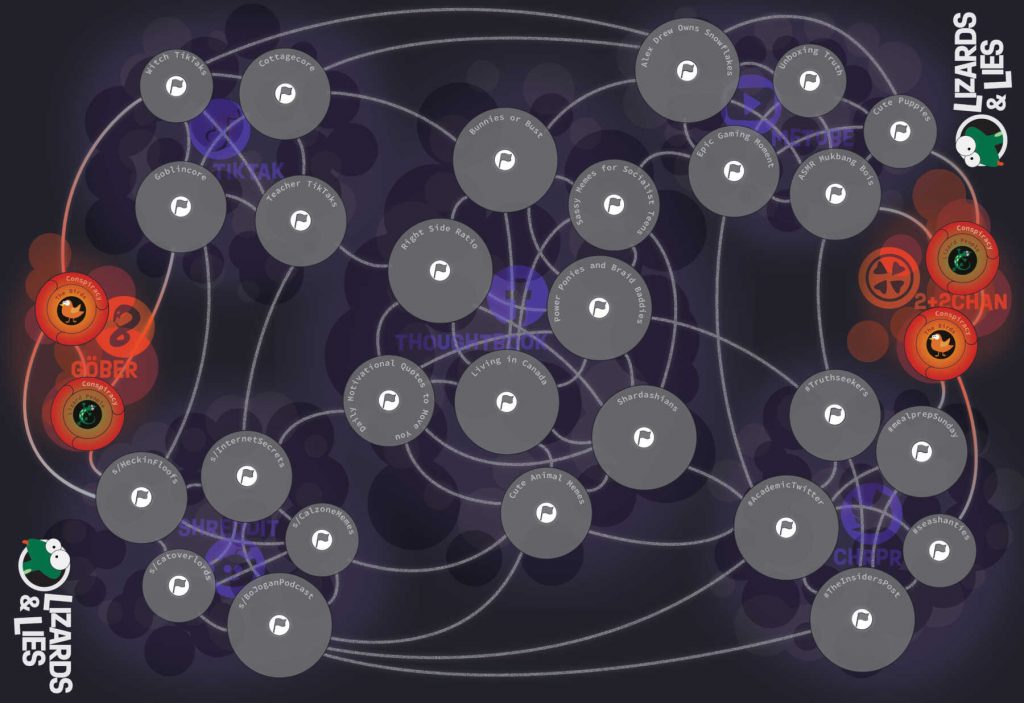 The final iteration of the gameboard which was used to simulate the movement of content through particular communities.

Lizards and Lies was invaluable for better understanding the role of the algorithm in this larger context. When playing the game, one player acts as the content recommendation algorithms, a position which attempts to recreate the role that content recommendation systems play in social media spaces. In her testimony to the Senate commerce committee, Meta whistleblower Frances Haugen revealed that Facebook’s newsfeed, for a time, prioritized angry and other emotional reactions over likes. But when playing Lizards and Lies, the capacity for the algorithm to intentionally shape a player’s feed was quite limited. As much as we might want to say that algorithms deliberately inspire hatred, algorithms are much more reactive than proactive. So how do algorithms promote ideology, intentionally or otherwise? And what forces determine what a user sees?

In our game play, one thing became clear. An algorithm’s goal is to provide and bolster content. The type of content doesn’t matter and the ideology behind it is not a concern. The algorithm focuses on results: if X community will engage with Y content, it will post Y in X’s feed. These decisions are based on the users—us. We choose what to post, share, click on and engage with. When playing as an algorithm, the logical line of play was to always put content where users supporting it already existed. It wasn’t trying to “radicalize” a random base of users, but let those already in place do the heavy lifting of creating, sharing, and engaging with content.

Games and play as a lasting approach

How do games and play give us insights on misleading content and radicalization in Canada? They ask us to be flexible in our understanding of the people and systems involved. Games help test how deeply interconnected the user bases and community practices that slowly push people to radical ideologies are. They help us interpret these processes and point to the role of people in spreading content.

When we talk about radicalization, the first step in the process is getting people to engage with their communities. The Freedom Convoy did this through playful visuals, like the bouncy castle, easily agreeable concepts like “freedom” and tapping into widespread pandemic fatigue. Relatable visuals and languages are some of the ways people are playing with one another and building support for their message.

These movements are hard to understand. They are dynamic and contain visible and invisible aspects. By using games, we can open up insights into radicalization behaviours and actions of different actors within these groups. By taking a lens of play, we can interrogate them from a new angle. By connecting play to radicalization, we can see how the now-removed rainbow husk of a bouncy castle helped disarm some Canadians to the ideas held by a group of occupiers that included far-right organizers and recognized hate groups.

If we want to understand the why’s of these movements, we need to comprehend the mindsets, behaviours and ideologies that drive engagement. Play and games offer an alternative way into these spaces. They refract the issue to expose new directions of thought. While I continue to ask, “How are Canadians playing with information?” I encourage you to reflect on yourself to ask, “How am I playing with information?”

This article was originally published on The Monitor, republished here with permission.