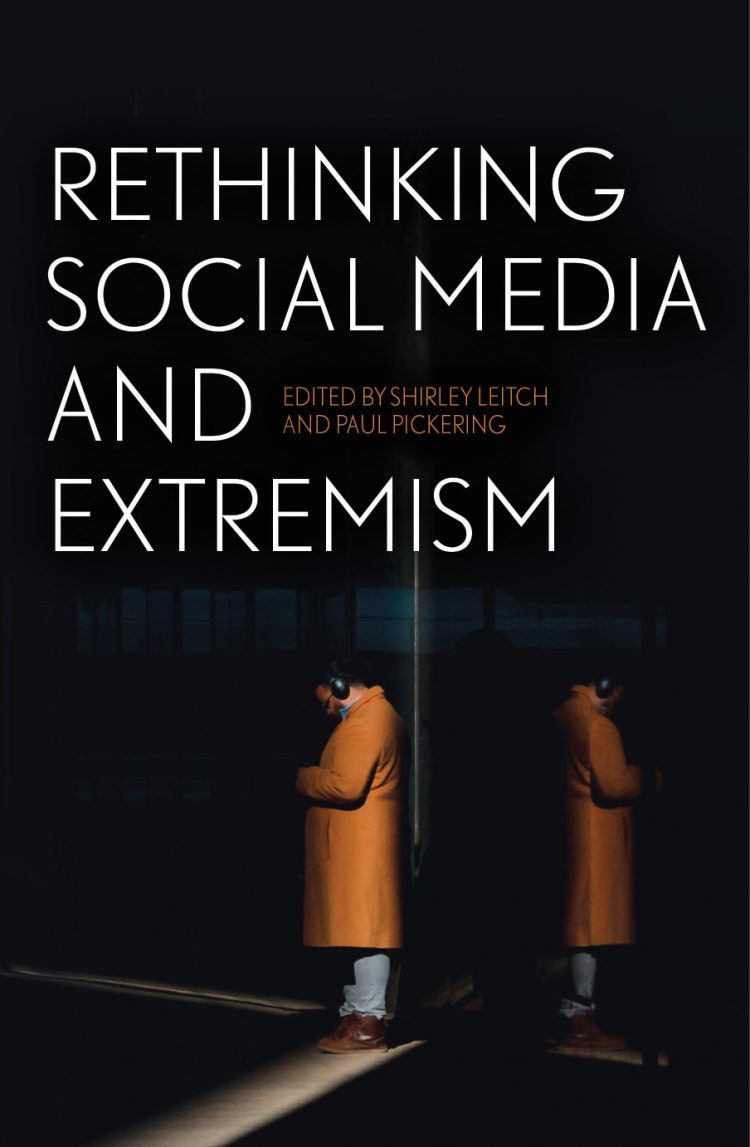 “Put starkly: Facebook livestreamed this massacre. While the terrorist was cast as a ‘lone gunman’ he was anything but alone.”

The introduction to Editors Shirley Leitch and Paul Pickering’s book lays out the global impact of the Christchurch Attack succinctly.

The book could be more accurately described as ‘Rethinking Social Media and Extremism Post Christchurch’. Each of the chapters displayed here can largely be divided into two major themes: what conditions led to an online environment which cultivated the Christchurch shooter, and critiques of the response to the attack. While in terms of numbers of chapters the majority of the book is dedicated to explaining the underlying conditions of the Christchurch attack, the online milieus that the attacker participated in, the livestreaming element of the attack itself, the latter theme of critiquing the response takes a narrower yet more focused view.

A Story Through the Chapters

The foundation for both themes is first provided by Shirley Leitch in the form of a thorough account of the Christchurch Massacre. This account begins with the rise of Islamophobia in the aftermath of 9/11 and ends with outlining multilateral responses such as the Christchurch Call, more localised national responses in Australia and New Zealand, and responses from social media platforms. As this description alludes to, this chapter is an exhaustive introduction invaluable for both those outside of terrorism studies and those within. While the chapter is largely descriptive it contains some criticism in the form of discussing the lessons learned from the massacre.

In regards the first theme, PhD student Andrew Hughes provides a particularly interesting application of the marketing practice of brand building to the actions of lone actor terrorists. Robert Fleet provides a nuanced account of the role of the video-games and the wider gaming industry in the production of these lone actor terrorists.  Mark Kenny discusses how normalised anger has become online as an essential precondition to the type of violence witnessed at the Christchurch Massacre. Specifically, he argues for the existence of a procedural relationship between incivility, cyber-hate and physical violence. While he does not go as far to claim that this is a causal relationship, it is at least a culturally contiguous and thus concomitant relationship. Given the enormous scale of the internet, and the number of malcontents which an individual can potentially communicate with and thus be radicalised by, the relationship is numerically significant. Kenny deliberately avoids the policy implications of this, rather he focuses on advising socially responsible users of platforms like Twitter to act with restraint and civility online.

While Kenny avoids discussions of policy the other theme of the book directly engages with them. Sally Wheeler sets the Christchurch Call in two contexts: the history of livestreaming violent events and the argument that technology companies should be seen as subject to the same responsibilities to the societies in which they operate as other large corporations. The most prominent example of this move to turn tech companies into civic actors is the Christchurch Call’s emphasis on content moderation. While content moderation is proposed as a technocratic means of combating the growth of extremist discourse on these platforms where through a process of advanced machine learning the platforms will self-regulate, Wheeler points out that currently that is not the case. Rather content moderation requires a significant element of human input, namely low paid content moderators who are exposed to a wide range of extremist and otherwise heinous content daily.

Like the Paris Call, which it immediately proceeded, the Christchurch Call lacks a geographic or regulatory anchor to the nation state. It is an aspirational document which aims to facilitate inter-state cooperation. Wheeler likens the Call to an act of techdiplomacy which opens a dialogue space that OSPs cannot resist participating in. To do otherwise is too high a reputational risk. The chapter discusses how at the same time tech companies are placed in a difficult position regarding the wide range of cultural and political norms present in each country they operate in. The often-cited example of German versus American views on unrestricted free speech as a right is invoked here. The thorny issues raised here are the reason for the ongoing GIFCT working groups, now entering their third year, continued existence.

The book is perhaps at its most edifying when it narrows its focus to the countries most immediately impacted by the Christchurch Attack.

Wheeler provides one of the most useful sections in the book, outlining clearly how the Christchurch Call has been implemented in domestic settings, predominantly Australia and New Zealand. This localised regulatory focus extends to Mark Nolan’s and Dominique Dalla-Pozza’s critique of Australia’s abhorrent violent material legislation, hastily drafted in the aftermath of the Christchurch Massacre. In a slight departure from the other chapters in this edited volume, Nolan and Dalla-Pozza build a sustained, detailed, critique of both the procedural and substantive aspects of a singular piece of legislation. One important problem highlighted is that the focus is placed on content service providers and hosting service providers. Internet service providers and the providers of chat and instant messaging services are excluded. Considering the recent move for policy makers, and researchers, to consider more of the tech stack this exclusion proves problematic.

The book ends on a pair of chapters providing well needed historical contextualisation of the ever-evolving communication technologies which underpin it. In the first Katrina Grant interrogates the often-debated notion of Twitter as the historical public square by comparing it to the actual historical agoras, forums and piazzas of ancient Greece, Rome and renaissance Florence. In the second, Nurmikko and Pickering attempt to answer a question largely absent from the debate:  does this new ability to for individuals to broadcast newsworthy, if heinous, events represent a fundamental change in the way we organise our lives and politics? Or is this simply an advance in communication technology which, like many before it, has provoked hysteria and kneejerk reactions before being normalised.

Leitch and Pickering have produced a wide-ranging interdisciplinary book both acts as a signpost for the issues and research avenues facing the post-Christchurch world of terrorism studies and as a solid introduction for those outside of the field. Chapters are largely arranged by field and the editors’ choice of authors which can write in an illuminating manner no matter the reader’s expertise is exemplary. The fact that the book is available open access further adds to this accessibility. The book is available for download on the ANU Press website.

The title is published under a Creative Commons Attribution-NonCommercial-NoDerivatives 4.0 International (CC BY-NC-ND 4.0) license. The full license terms are available at https://creativecommons.org/licenses/by-nc-nd/4.0/