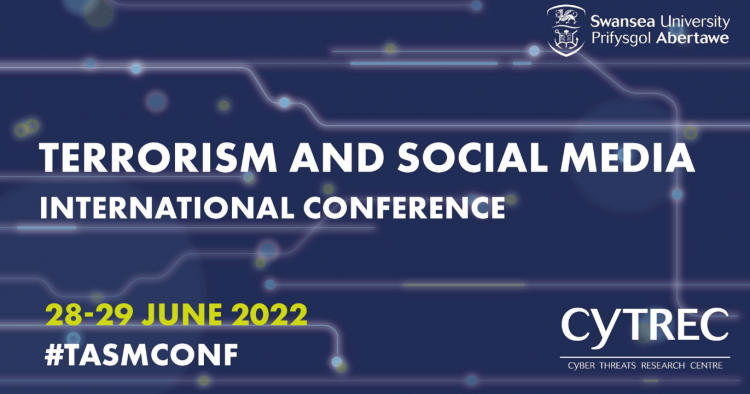 By the ARC Steering Committee,

The Accelerationism Research Consortium (ARC) attended the Terrorism and Social Media (TASM) Conference at Swansea University on June 28 and 29, 2022. We were thrilled to meet face-to-face with colleagues, partner institutions, and stakeholders, and engage with colleagues on timely issues of violent extremism. The conference provided unparalleled opportunities to get a feel for the pulse of where terrorism and social media studies stand today. Here are our five key takeaways from TASM 2022.

1. The field has committed to thoughtful, collaborative, and evidence-driven analysis of the facets of accelerationism, indicating that impactful work on the topic has indeed been underway for years.

Militant accelerationism is one of the most concerning evolutions of political violence and terrorism. Yet, it is arguably the least understood national security threat facing liberal democratic societies on a global scale. To date, the militant accelerationism problem set has yet to be analyzed with methodological rigor, nor has its assessment received the necessary institutional support and financial backing. There is a critical gap in our collective understanding of militant accelerationist actors and organizations within the context of other terrorist threats, as well as the context of the platforms that host accelerationist content and discourse. Gaps such as these are, in large part, what ARC was founded to fill: To support, facilitate, and provide a collaborative space to allow scholars to come together and explore the nuances of these problem sets in an open, synergistic manner.

2. The conference attendees represented a diverse range of research topics, fields of study, and , and frameworks through which they conduct their research.

While recent iterations of largely U.S. based neo-fascist movements like Atomwaffen Division and The Base are two of the more prominent nodes in a broader network of accelerationist actors, accelerationists can be found in many contemporary violent extremist groups and movements including: the Boogaloo, Proud Boys, neo-fascist skullmasks, eco-fascists and related actors targeting infrastructure, MMA-focused “active clubs,” and the Groyper movement, among others. As the study of these spaces has evolved, mainstream academia and research have tended to prioritize a Western-leaning, English language-dominant review of these spaces. However, accelerationism is not exclusive to the United States or the West. It is a distinctly global phenomenon present in Canada, the UK, Europe, Russia, Asia, and Latin America. This geographically, culturally, and tactically diffuse threat requires a new analytical mode that focuses on networks – and not exclusively on ideology or group – as the principal method of understanding the accelerationist landscape. To adequately address militant accelerationism, ARC firmly believes in and practices a cross-discipline, cross-sector, and international response that incorporates primary source evidence and analytic assessments from a diverse range of individuals. TASM was an exciting manifestation of such goals.

3. In a field where rhetoric studies tend to take precedence, aesthetics are an understudied aspect of terrorist propaganda. TASM accentuated the value of iconographical and audiovisual content research.

While much of the research and analysis into the relationship between terrorism and social media emphasizes rhetorical and discursive analysis, TASM attendees brought to bear new frameworks and methods to engage with audiovisual content. Video and audio content is inherently more difficult to study because of the relative lack of tools enabling automated – or even just expedited – analysis compared to rhetorical content. The aesthetics and symbols embraced and weaponized by extremists on and offline took center stage at TASM; this bodes well for continued innovation in this space. ARC welcomes and encourages additional research submissions on this front.

4. Encouragingly, there appears to be an increasing consensus regarding the current terrorism landscape as post-organizational. However, misnomers like “salad bar” and “fringe fluidity” continue to be used to characterize the amorphous ideological boundaries of various individuals and movements.

Numerous presentations at TASM provided valuable insights into the current terrorism landscape, especially as it relates to the increasingly post-organizational elements of the landscape today. This represented an encouraging inroad made in a discipline so often fraught with disagreements about fundamental concepts. There were many discussions during TASM that underscored the reality that the threat we face from the violent far right is an amorphous and complex one. As such, ensuring accurate assessments regarding the contours of these spaces is crucial. This begins by developing an understanding of the “mobilizing concepts” of the actors within these ecosystems. In many instances of violent extremist mobilization, actors are not merely picking from a “salad bar” of philosophically or doctrinally unmoored ideological options, instead unifying around consistent and often apocalyptic reactionary frameworks which allow for coherent meaning in seemingly paradoxical ideologies. In the near future, ARC plans to publish research showing that syncretism in militant accelerationist communities is not random, but rather carefully cultivated and constructed.

More than any other terrorist threat, contemporary militant accelerationism actors and networks present a fractal and distinctive threat that, by design, is intended to be resilient through a strategy of “continual collapse, reshuffling, and reemergence of groups over time.” Unlike other terrorist threats, militant accelerationists are not principally concerned with leveraging their willingness to use violence to force changes in government policy. Instead, most militant accelerationist efforts are explicitly tailored to exploit the grievances within both the broader populace and established extremist milieus to instigate violent action or deepen the belief that there remains “no political means to achieve their goals and that they therefore had to take matters into their own hands.” Militant accelerationists and other post-liberal actors are not merely supervising the decline of liberalism and its institutions, but are serving in the vanguard of its demise by actively trying to dismantle democratic systems.

5. The need for continued engagement with primary source materials – and the responsible storage of those materials – is crucial to threat analysis.

While the underlying drivers of militant accelerationism are not new phenomena, the multitude of offline manifestations of this threat have evolved into a deeply complex policy challenge for practitioners and policymakers. These problem sets cannot be solved simply by reorienting traditional counterterrorism mechanisms. Instead they demand new and innovative solutions that reflect an understanding of the militant accelerationist threat. To understand the threat, researchers must grapple with the online discourse and the primary materials from which these actors are drawing inspiration. As such, many TASM presenters offered timely, crucial insights into gathering and storing primary materials, as well as understanding what researchers are observing when evaluating these materials.

TASM 2022 indicated that there are people across disciplines, sectors, and regions who have the knowledge and desire to collaborate and innovate. We firmly believe that successfully addressing the threat of militant accelerationism – as well as broader threats borne from the nexus of terrorism and social media – can only occur by engaging in transparent and cooperative analysis and research. At ARC, we look forward to continuing to build upon the strong foundation laid by researchers from academia, NGOs, and the private sector. TASM provided a tangible springboard; ARC is committed to coordinating with those who attended to continue working together on bridging the divide between practitioners, researchers, and journalists. ARC’s cross-industry working groups represent that collaborative discussions, debates, knowledge-sharing, and level-set approaches to understanding and addressing the threat of accelerationist actors and networks can occur.

Like other online harms, militant accelerationism requires prevention, analysis, and intervention to mitigate its impacts. Our robust research programming, enabled by our carefully cultivated board of advisors, fellows, and working group members, will enable us to tackle all three challenges. ARC represents a new approach to tackling terrorist threats – proactively building a wide foundation for engagement and collaboration that will address the terroristic threat of militant accelerationism.

Meghan Conroy is an Investigator with the US House of Representatives and the Chief of Staff at the Accelerationism Research Consortium. On Twitter @meghaneconroy.

Matthew Kriner is a Senior Research Scholar with the Center on Terrorism, Extremism, and Counterterrorism at the Middlebury Institute for International Studies and the Managing Director at the Accelerationism Research Consortium. On Twitter @mattkriner.

Jon Lewis is a Research Fellow at George Washington University’s Program on Extremism and the Director of Policy Research at the Accelerationism Research Consortium. On Twitter @Jon_Lewis27.

Alex Newhouse is the Deputy Director with the Center on Terrorism, Extremism, and Counterterrorism at the Middlebury Institute for International Studies and the Director of Technical Research at the Accelerationism Research Consortium. On Twitter @AlexBNewhouse.