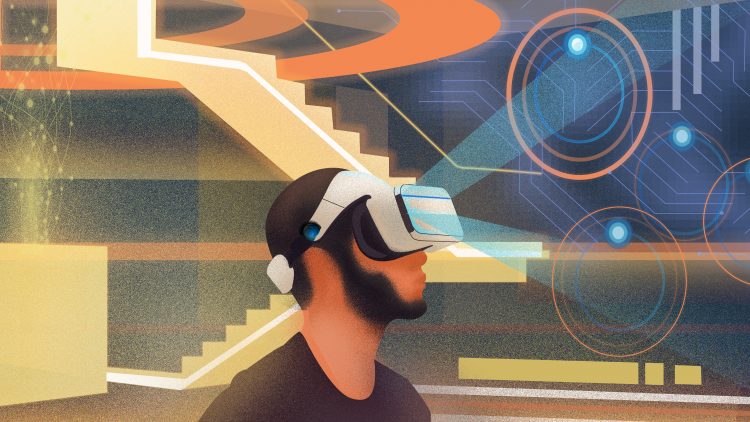 Young people remain identified as one of the most vulnerable groups at risk of online radicalisation in the UK, however using education institutions to engage with and build resilience amongst these groups remains a persistent challenge. Virtual reality as an alternative resource has been increasingly explored to help bridge the gap between developing educational models and building interest amongst students. Exploiting the potential benefits of technologies such as virtual reality is essential to redesigning the existing educational models around radicalisation and online safety, which are often used infrequently and have little impact on a grassroots level. This redevelopment of such models reflects that there is a growing demand to transition away from more traditional resources such as films, animations and presentations towards technologies which promote game dynamics.

Virtual reality is a widely engaging resource which has the potential to transform existing educational models and develop a new approach to engaging young people and building resilience against emerging and specific threats. The immersive and interactive features of virtual reality provide a unique opportunity within educational institutions to combine both the practices of entertainment and teaching. It also has the capability to provide a space for young people to become immersed into controlled and pre-designed environments which gives them autonomy in making decisions and actions within the simulation and teaches best practices.

There are a number of examples which demonstrate how virtual reality can be used as a catalyst to diffuse the existing stigmas which underline the discussions of sensitive topics such as online safety, radicalisation and extremism within the classroom. The impact of the UK’s ‘hard’ approach to countering radicalisation and violent extremism has meant that tensions have arisen around the perceived censoring of freedom of speech particularly within academic institutions such as universities. Iterations of virtual reality have aimed to reopen the discussions around online radicalisation and rebuild the classroom as a safe space to challenge and debate ideological values. For example the Virtual Inclusion Project is a virtual reality simulation which allows young people to ‘experience’ the life of a young person facing discrimination and can make decisions which have a cascading effect on the outcome of the characters actions. This approach allows young people to experience how specific actions will either increase or decrease the characters risk and potential vulnerability.

Other virtual reality scenarios have been developed for lower age ranges, to gently introduce sensitive subjects and implement best practices when behaving online to build resilience against online radicalisation. For example Digital Detectives is a virtual reality application aimed at primary school children which raises awareness about viewing and sharing information online, and communicating with other online users which may place the young person at a higher risk.

This method of developing and using hypothetical contexts is particularly effective in raising awareness of sensitive threats such as online radicalisation and cover topics such as hate speech, online propaganda and mis/disinformation. This can also give young people new opportunities to increase their confidence and resilience in challenging and debating concepts around online radicalisation, drawing upon the outcomes of the scenario. This can be equally as beneficial towards authoritative figures in education, which virtual reality can be used to soften the level of responsibility and induce areas which can prompt discussions for staff who have less confidence and experience in raising awareness of online radicalisation.

The impact of virtual reality as an educational resource is limited by the speed of which online radicalisation processes, technology and youth culture develops. However, these factors do not directly affect the ability of virtual reality itself, but the simulations which are developed for its use. The life cycle of social media platforms has a large effect on the methods used for online radicalisation and the risk which is posed to young people. For instance, existing resources refer to platforms such as Facebook, which have been replaced as the main platforms used within younger user communities by Snapchat, Instagram and TikTok, which too will become superseded as new platforms emerge. With these new platforms the potential threats and risks to young people will change, and existing virtual reality scenarios will become outdated. This will remain an ongoing challenge for the educational sector in using any new technologies as a teaching resource, as the quick development of youth culture and technology trends will implicate the ability for existing scenarios to represent contemporary threats and trends which young people can relate to.

Despite the potential limitations, existing and emerging virtual reality simulations have demonstrated the potential and benefits of incorporating new technologies within educational resources. These examples have highlighted how virtual reality can fill the current gap which exists in developing engaging and interactive educational models which build resilience amongst young people against a number of online radicalisation processes. Although research within this area continues to grow, the use of virtual reality to counter online radicalisation remains in its infancy and should take inspiration from other projects to further its development. For example, Virtual Decisions directly involves young people in the design process to create scenarios which are authentic relatable to younger audiences.

The Covid-19 pandemic has presented an unprecedented challenge to building resilience amongst young people against online radicalisation. The effects of the pandemic have impacted the daily routines of many young people and has led to an unprecedented increase in the time spent online, with not all young people having the necessary experience to mitigate against online threats. The outcomes of the coronavirus have highlighted that developing engaging teaching models to build resilience amongst young people remains a high priority to ensure young people can successfully mitigate against existing and emerging online radicalisation threats independently and confidently.

Alice is a researcher at the Centre of Excellence in Terrorism, Resilience, Intelligence and Organised Crime Research (CENTRIC). This post was written as part of the MINDb4ACT Project which aims to build innovative actions against violent extremism. Follow her on Twitter: @AliceRaven1. Follow CENTRIC on Twitter: @CENTRICResearch