Far-right populist nationalism seems contagious. It’s the new normal and one can only wonder how it all started, as the rise of far-right populism appears to come out of nowhere. An average reader of the mainstream media would have long overlooked the discord sowed among the ordinary people in the grassroots. Far-right ideologues have been cultivating their worldviews for ages, targeting the mostly apolitical masses, stoking fear through fake stories such as the Great Replacement, QAnon, Deep State, and even stories about the world domination plans of fictitious reptilians (humanoid reptiles) who would rule over humans.

If you take a closer look, many of these conspiracy fables come under the fictitious genre of thriller. Thrillers produce excitement and anticipation; conspiracy thrillers generate the same psychological effect among their audiences, attracting people to eagerly follow these stories in anticipation of next developments. Nothing may come next, but it doesn’t stop the excitement these conspiracy thrillers generate among the people.

Conspiracy thrillers play a crucial role in enticing, holding, and engaging potential followers of the radical right. With digital technologies are out in the hands of many, broadcasting radical right fables through canny and imaginative storytelling has never been easier. Against the backdrop of such thriller conspiracies and mysteries, this post aims to analyze one of the most penetrating visual mediums, ‘memes’, that the radical right uses to convey messages to once apolitical or politically ignorant segments of society with the aim of breaking new grounds as part of their illiberal metapolitical conquest, which is the task of promoting authoritarian worldviews in the place of egalitarian ideals.

Sensational stories delivered through powerful visual mediums make a lasting impact on people for the same reason that Marvel Comics and other visual traditions, such as manga and anime, have created such popular cultures. The term ‘meme’ is associated with the word ‘viral’, which indicates an attribute of a meme. Viral memes conquered the minds of once indifferent masses, connecting them through their shared stimulus. For example, the lolcat memes, which preceded the radical right meme wars, became a popular phenomenon itself. Lolcat memes connect people through the shared incitement of simple, humorous, and enjoyable visual expressions that can produce effortless social trends and movements.

How do such trends impact culture—or, more specifically, what’s the role of memes in steering socio-cultural transformations? The theory of dual inheritance explains the importance of learned collective behavior, such as culture, alongside genetics, in determining evolution. Cavalli-Sforza and Feldman (1981), Boyd and Richerson (1985), and Durham (1991), among many others, examined human behavior as a product of two coevolving processes: genetics and culture.

The evolution of genetics gives humans the capacity to learn and produce knowledge. Alongside, cultural evolution determines human behavior, transmitting cultural learnings from one person to another or from one generation to the next. What’s important about learned cultural behavior is that culture can alter what’s human and genetics would follow, evolving to adapt to cultural evolution. Therefore, culture is a determiner, and ideologues target culture when they are serious about starting long-term foundational shifts that would bring lasting changes in collective human behavior.

The information revolution changed the way in which people communicate, express themselves, and engage with each other. The digital universe has become a territory populated by millions of people. Offering people the ability to break physical boundaries by entering this virtual universe, digital technologies have become a part of a cultural revolution. The Internet instigated the development of countless new mediums of communication. Among such innovative communication mediums, imageboards—a popular visual communication medium—became a key platform for the radical right’s metapolitical struggle, which aims to change existing cultural values in favor of ultra-right nationalism, traditionalism, and race preservation. What is the contribution of imageboards in creating a radical right popular culture, especially through the specific brand name called Chan sites? The contribution of Chan sites is largely concentrated on visual content called memes. Understanding memes is as important as understanding the popular culture created by memes. 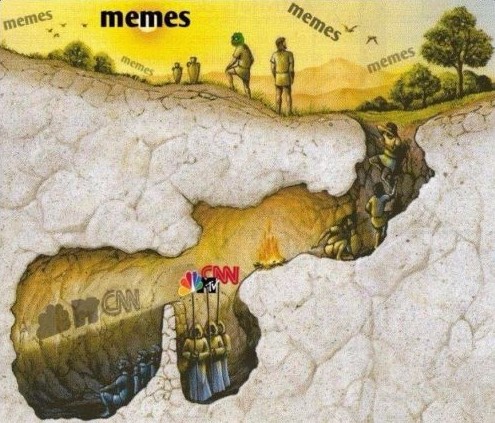 A meme from 8chan.

What is a meme? It’s a simple expression modeled to be visually and textually appealing and is delivered via available online broadcasting platforms to as many people as possible. Lexico defines a meme as ‘An element of culture or system of behavior passed from one individual to another’. As Dawkins explains: ‘Memes (discrete units of knowledge, gossip, jokes and so on) are to culture what genes are to life. […] cultural evolution may be driven by the most successful memes’. When considering the many contributions of memes, it’s crucial role in bringing thought movements to life, in a form of ‘expressions’ appears to be its main strength. Memes affect people in many ways. First, a meme is generated in the mind; thoughts of this mind become memes; this mind can form a habit of producing memes, becoming prolific in its craft in the long run. Second, memes are addictive or habit-forming thought expressions, which means that memes can spread among people to incite thought movements. As memes are identified as an ‘element of culture’, what’s actually being transmitted as ‘memes’ have real and penetrating cultural impact.

What’s the cultural impact of memes? The radical right must not have found memes by accident. As a cultural thought penetrator, memes address exactly what the radical right wants to impact as part of their metapolitical strategy, which is culture. Memes are an effective metapolitical instrument that can be used to create and transfer popular thought movements that aim to bring about long-term cultural transformations. At their most viral, memes spread like wildfires, and have the ability to connect with the most inaccessible segments of society by means of impacting shared sentiments.

Most memes are produced with visuals and texts in the form of simple thought expressions, and this double dose of visuals and texts is rich in meaning and designed to impact the sentiments of a shared cultural mindset. Radical right memes are carriers of their specific worldviews and propagators of the radical right cultural revolution. As it seems, the radical right has found the most potent instrument for a metapolitical conquest aimed at a cultural transformation: their memes penetrate culture like poison. According to Brodie, a meme is a ‘virus of the mind’. Radical right memes are similar to the transmitters of brittle bone disease, and they have spread deep into liberal democratic cultural foundations.

Dr Chamila Liyanage is a Policy and Practitioner Fellow at CARR and Researcher/Content Developer at Radical-R: Radicalisation Research. See her profile HERE.

This article was originally posted on Centre for Analysis of the Radical Right (CARR) website. Republished here with permission. This post is also hosted by Rantt Media, HERE.