This blog post presents an edited section from the full report, available in both English and in German [Ed.].

By Reem Ahmed and Daniela Pisoiu

A total of 381,912 tweets were collected through the Twitter application programming interface (API) from 175 EU-wide accounts that were identified as right-wing extremist (specifically, accounts with overt neo-Nazi and white supremacist themes). The tweets were collected at the end of September 2016, and the sample includes tweets from 1 September 2015 to 30 September 2016. To examine potential overlaps, we examined the top hashtags, hashtag co-occurrences, and URLs. We also investigated account suspension.

The aim of this exploratory part of the study was to gain a cursory insight into some of the overlaps evident in the online extreme right Twitter community in Europe. To analyse these overlaps, we looked to the different hashtags and URLs collected from the 175 accounts. Hashtags are useful as they direct users to a particular topic and draw in a supposed “virtual community of interested listeners” (Zappavigna 2011: 791). Hashtags are a way of communicating with different users and engaging in particular debates surrounding that hashtag, but they have also been used by extremists to infiltrate moderate debates (Berger 2016; Graham 2015). One method of looking at overlap is to map out hashtag co-occurrence – which is when two hashtags are used within the same tweet. URLs are also helpful as they show which platforms and news websites such communities link to.

Of the tweets, 23.64% contained hashtags, and of the tweets with hashtags, 44.4% contained more than one hashtag and 35.9% linked to URLs. English was the most prominent language (32.2%), followed by Spanish (16.9%) and German (15%). This reflects the countries represented in the sample, as the largest number of accounts originated in Spain (18.3%), followed by the UK and Germany (both 12.6%). It is important to note that it was not possible to determine exactly where 8.6% of the sample originated from as those users did not disclose their location. These accounts tended to tweet in English but were ambiguous about their location and tweeted about more general themes, such as anti-Semitism (holocaust denial, ‘Jewish world conspiracy’), defending Europe and the European race, and ‘white genocide’. The high proportion of Spanish accounts is a particularly interesting finding as far-right activism in Spain has – until recently – been viewed as a ‘fringe’ phenomenon, as compared to other European states (Encarnación 2019). The recent electoral success of the far-right Vox (Voice) party, however, has dampened Spanish feelings of being ‘immune’ to right-wing populism, as the party managed to secure 24 representatives in the Spanish parliament with 10% of the vote in the national elections on 28 April 2019.

Table 1 displays the top ten hashtags in the dataset. The most frequently used was #whitegenocide, followed by #afd and #merkel. This is unsurprising, given that the refugee crisis – and Chancellor Merkel’s involvement in it – was at its height during this time. In addition to Merkel and the AfD, there are other hashtags which relate to national politics, such as #alvde and #brexit, again unsurprising as Spain and the UK, respectively, featured prominently in the sample. The hashtags #islam and #isis were also used widely, as well as #eu – predominantly in negative terms. Moreover, #trump, #maga (Make America Great Again), and the US election in general were popular topics in the dataset as Trump was viewed as a champion against the ‘crooked’ elite, which Hillary Clinton was perceived to represent dur-ing the 2016 US election. There were also many references to alt-right tropes, such as Pepe the Frog, and a good deal of trolling around the #debatenight hashtag. This relates back to Ebner and Davey’s (2017) findings as there appeared to be some level of cooperation amongst the transnational right-wing scene in a foreign election. There are also similarities with Berger’s (2018) findings as ‘MAGA’ and words relating to ‘Trump’ scored very highly in terms of hashtag, profile word, and word pair frequency. The #whitegenocide hashtag also featured in Berger’s top 25 hashtags, 2,983 in total (2018:33). These connections and similarities are significant and highlight how the US context and actors seem to be driving international far-right narratives. 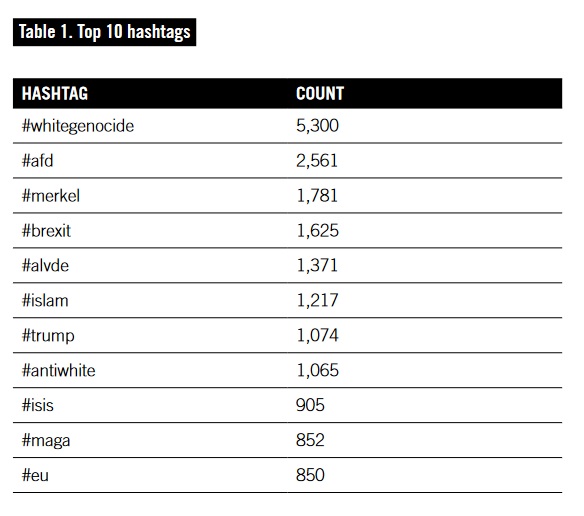 Table 2 shows the top 20 hashtag co-occurrences that emerged from the dataset. Aside from the more ‘likely’ co-occurrences with ‘white’ identity-themed hashtags, such as #antiwhite, #diversity, #altright, and #whitepeople, #whitegenocide was also used with more populist themes such as #trump, #ukip and #brexit. In addition, these accounts not only appeared to have been supporting Donald Trump, but also encouraged their followers to vote for the AfD in Germany. As such, discussions surrounding refugees were clearly prominent and #merkel and the ruling coalition of the #cdu and #spd were seen as central to this debate, with the #afd serving as an appropriate alter-native to the mainstream parties. Using mainstream party hashtags was likely used to infiltrate any discussions relating to these parties on Twitter (cf. Graham 2015). The #afd was also tweeted alongside #pegida by way of mutual support.

The majority of URLs within the dataset linked to other Twitter pages and tweets. There were also a high number of out-links to YouTube and Facebook pages. Mainstream right-leaning and explicitly far-right news sites, such as Mail Online, Die Welt, Daily Express, Breitbart, Russia Today, and Sputnik News were also regularly linked to ‘substantiate’ the evidence presented in the tweets – mostly concerning refugees and immigrants. Similar findings were also reflected in Berger’s (2018) study. In addition to news portals and social media pages, a number of tweets linked to pages and blogs associated with prominent far-right activists such as David Duke of the Ku Klux Klan (KKK) and with the extreme right website the ‘Daily Stormer’. Links to the New Right online publication Junge Freiheit were also apparent. In general, it appears that the tweets from these accounts were used as a means of disseminating information rather than calling explicitly for violence. In this sense, mobilisation was used mostly to promote right-wing populist parties, figures, and themes, such as the AfD, Trump, and Brexit, respectively. Moreover, there was a general sense of defending European culture, identity, and race through creating a narrative of white Nordic roots – a common trope within the white supremacist movement. Furthermore, some of the posts were explicitly anti-Semitic, with some also using the platform to deny the Holocaust.

The hashtags, hashtag co-occurrences, and URLs are relevant as they give an insight into the topics that the European extreme right are tweeting about. The co-occurrences, in particular, also demonstrate tactics of inter-ideological mingling, as well as potential trolling. Beyond this, the extreme right is openly supporting radical right-wing populist parties, issues, and figures. This is important as it shows that radical parties and issues are resonating with the more extreme right, even though the former constantly deny any ideological affinity with the latter. 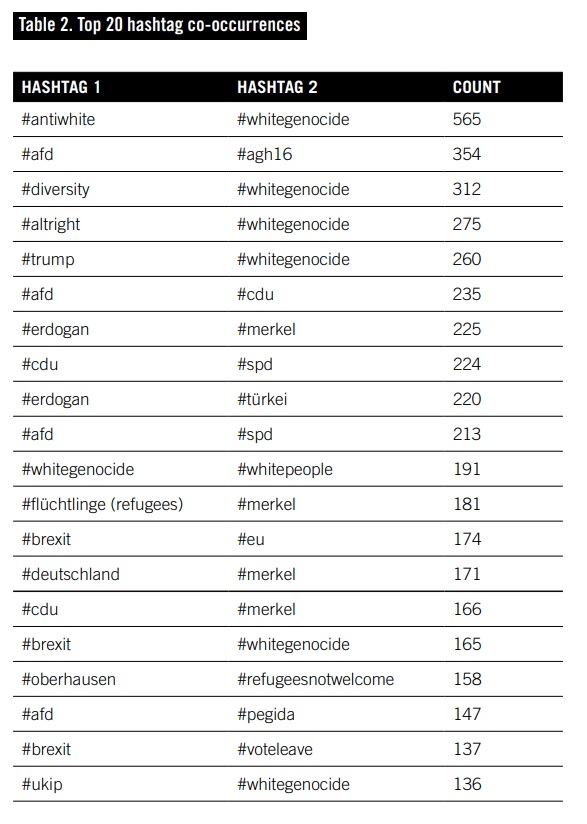 Reem Ahmed is a Researcher at the Institute for Peace Research and Security Policy at the University of Hamburg (IFSH) working within the framework of VOX-Pol. She is also a PhD Candidate at the Albrecht Mendelssohn Bartholdy Graduate School of Law (AMBSL) at the University of Hamburg. Her dissertation examines responses to online extremism in the UK, Germany, and the EU and is funded by a scholarship awarded by the AMBSL. On Twitter: @RAhmed105.

Daniela Pisoiu is a Senior Researcher at the Austrian Institute for International Affairs (oiip), Vienna and a member of VOX-Pol. She completed her PhD at the University of St Andrews, Centre for the Study of Terrorism and Political Violence and has conducted fieldwork on the topic of radicalisation in Austria, Germany and France, as well as other European countries. On Twitter: @DPisoiu.