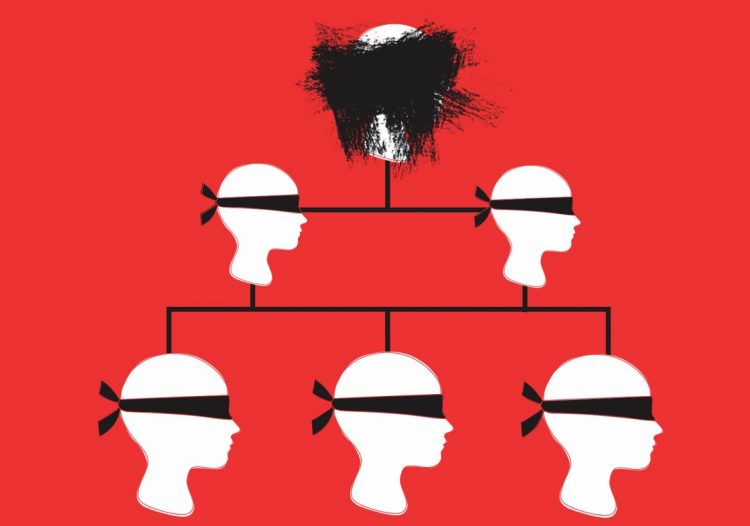 A potent combination of technology and a fractured extreme-right is producing innovative organisations that are harder to police.

In April 2020 two men aged 20 and 22 were arrested after posting racist stickers in public spaces across the city of Sheffield. The stickers featured various slogans critical of the government’s handling of coronavirus and linking it to immigration; they also referenced the group Hundred-Handers. Sheffield is not an isolated instance and Hundred-Handers material has seemingly been posted publicly as far afield as the United States, the Netherlands, Canada, and Germany.

Historically, the extreme-right has fluctuated between periods of greater and lesser unity and is currently going through a fragmented period. The limited extreme-right groupuscules that have emerged have been subject to increased state scrutiny and are in some cases broken up by state action. In the UK, extreme-right group National Action and spin-offs including Scottish Dawn, NS131, and System Resistance Network have been legally proscribed.

The vulnerability of organisations to state action is well-known within the extreme-right and several solutions have been offered. One-time extreme-right ideologue David Myatt suggested that the extreme-right in the UK should be divided between political and paramilitary wings, with a firewall between the two. US activist Louis Beam developed the concept of leaderless resistance, suggesting that ideologically well-versed activists could act independently of one another and still achieve a common goal.

More recently some extreme-right groupuscules have experimented with technology to create blind networks. Using encrypted messaging applications, members take instructions from an anonymous central channel and also take steps to conceal their own identities. The result is a blind network in which a central handler can issue instructions to members who then carry them out and report back – entirely anonymously. Although this model seems unsuited to high-cost and high-risk forms of activism, as it may limit the development of personal trust and group loyalty, it has been used in support of low-intensity, real-world activism.

What is an extreme-right groupuscule?

An extreme-right formation often with limited membership and niche ideological and stylistic appeal. Small and self-contained, groupuscules are hard to police or ban effectively. Groupuscular organisation is maintained through a network of informal contacts and shared information channels, especially online. German neo-Nazi groups, as well as the UK-based National Action, have been analysed as groupuscules.

Hundred-Handers maintains a Telegram channel which they use to distribute images, publicise successful stickering campaigns, and to call for the harassment of ideological opponents. Images posted to the channel, describing Hundred-Handers activism, include specific instructions for would-be supporters: They are told to buy a certain make of printer and compatible blank stickers, and then to download collections of images from Telegram to be turned into campaign stickers.

Separate images set out the group’s organisational philosophy, referring to the central account which distributes material as the ‘head’ and individual recruits as ‘hands’. Three key themes emerge:

Older images refer to slightly different procedures in which images are distributed via email (Tutanoa) or by a file-storage platform (spee.ch). This suggests their distribution strategy has evolved over time.

Publicity and awareness-raising is a key element of Hundred-Handers’ strategy and a guest on the extreme-right The Absolute State of Britain podcast in February 2020 celebrated the group’s recent success in securing local media coverage.

Ideologically, the content posted by the group conforms to a generic and far-reaching form of ethno-nationalism demonstrating anti-immigration, traditionalism, anti-globalisation, anti-LGBTQ, and anti-Semitic sentiment. Content has also referenced restrictions arising from the Covid-19 pandemic.

The Hundred-Handers are not the first to attempt this model. UK-based group System Resistance Network (SRN) released a recruitment video in which applicants were encouraged to get in contact anonymously, specifically being instructed to avoid using their real name or location. SRN is legally proscribed in the UK as of February 2020 as an alternative name for National Action, and it is unclear the extent to which their recruitment efforts were successful.

Overall, the combination of a fragmented transnational extreme-right and communications technology has created an online pool of ready-politicised recruits for different kinds of mobilisation. Anonymous networks such as the Hundred-Handers can draw on this pool and offer internet-bound activists an opportunity to get involved in physical activism at minimal cost and seemingly with little risk.

A key aspect of this form of direct action is performance and publicity. Individual local acts are combined to give the impression of a larger network; exaggerated claims of scale and reach have been a key aspect of recent extreme-right propaganda.

Although the scope for more coordinated forms of direct action seems limited under this organisational arrangement, this type of activity is a good opportunity for those looking to make the leap from digital-only to real-world activism.

This article is republished from the Centre for Research and Evidence on Security Threats (CREST) under Creative Commons BY-NC-SA 4.0. Follow CREST on Twitter @crest_research.