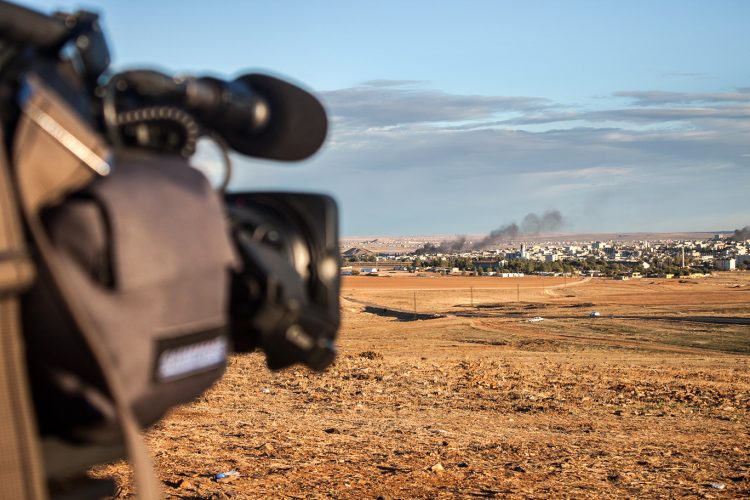 The Syrian war has been, for good and often for ill, an incubator for developing new tools and strategies for digital conflict. Whether any of these actors “win” the Syrian war, their digital strategies will likely be with us for a long time.

ISIS and other jihadist groups have inspired tens of thousands of young people to travel to Syria to fight or to support ISIS’ efforts from abroad, in part by giving alienated people the social connections they lack elsewhere.

Abu Fatima, not his real name, got a visit one day from British law enforcement. They were concerned about his online activity, his pro-ISIS postings and the individuals he was talking with online. They were paying him a kind of courtesy visit – giving him a warning – before he went too far down the rabbit hole. His father, needless to say, was quite upset and demanded that he shut down his Twitter account. It seemed like an easy choice for his father – close your Twitter page or risk going to jail. But when I spoke to Abu Fatima over KIK messenger as part of my research on online jihadism, he explained that the choice was not easy. “Trust me, I’ve never felt like I belonged anywhere until I met the brothers and sisters online,” he said. “I want to be around people who are on the same wavelength as me.”

What cases like that of Abu Fatima make clear is that so-called “online radicalization” is not simply about a one-way consumption of terrorist propaganda. As researchers in the sociology of the internet have learned by investigating Wiccans in cybercovens, Christians engaged in online confessionals, and other religious communities online, the internet can change how individuals experience their faith. In particular, internet use can challenge notions of religious “authority,”and can make it easier for people to find supportive and rewarding social groups. Unfortunately, both of these factors can also foster conditions for radicalization to violence.

First, as I have found by engaging with ISIS supporters online, social media has a “levelling effect” on discussions about orthodoxy, scripture and religious obligation. This follows the observation by Dawson and Cowan that, “the easy coexistence of so many different and openly heterodox views in cyberspace exposes the Net surfer to a more fluid doctrinal environment, one that has the potential to encourage individual religious and spiritual experimentation.” In short, religious authority is de-institutionalized.

As a result, there are very young supporters of ISIS online who call themselves “alim” (scholar) and who opine on the Qur’an, Hadith, nullifiers of Islam, and orthodox belief, but who have absolutely no religious training. Islamic scholars or imams spend years learning to interpret these complex sources. Instead of turning to them, young people turn to each other. On platforms like Twitter, they discuss questions that are immensely complicated and deeply significant. This phenomenon of the “instant expert” can be liberating, but it can also make young people vulnerable to religious teachings that are stripped of nuance and context.

Second, as I and others have argued in several recent publications, terrorism researchers need to take more seriously what internet researchers have known for some time: that the internet is a social space. It is not simply an environment where people go to read the news, watch videos or check their e-mail. It is a space where the range of human experience, emotion and sociality can be found – just like “real life.”

In fact, I have interviewed many supporters of the Islamic State who claim that the online space is more real than their real life. In this space, whether it’s Twitter, Facebook or Telegram chat rooms, they build reputations, form friendships, take risks, and put their real selves out there. Social media enables individuals within certain subcultures to find each other, and develop a renewed sense of belonging and community like never before.

In other words, it is not simply the fact that ISIS produces propaganda that is compelling or persuasive – although they are very good at it – but that the jihadist community, sustained virtually, provides the social and emotional space for these messages to resonate. Many of these youth find a home online, and for some, like Abu Fatima above, it is the first time they have felt welcomed and understood.

These youth, whose very beliefs have been discouraged or criminalized in their societies, do not always feel secure in their “real life.” Their friends as well as religious leaders worry that associating with them will invite scrutiny from law enforcement. Online, they find a global brotherhood and sisterhood which tells them that their sense of uneasiness and lack of belonging is to be embraced; that feeling like a fish out of water is a good thing because the water is polluted.

The Syrian conflict and the rise of ISIS have served as a catalyst, allowing these youth to come together for a common purpose, whether it is to get rid of the Syrian president or to help protect the so-called Caliphate. While much has been written about jihadist media output, and how the speed and scope of it has been forever changed by the internet, we should not lose sight of the very real emotional and social benefits experienced by youth in these online spaces.

Amarnath Amarasingam is a Fellow at the George Washington University’s Program on Extremism. He tweets at @AmarAmarasingam. The article originally appeared on OpenCanada.org as part of the series ‘The War is Just a Click Away‘. Republished here with permission.