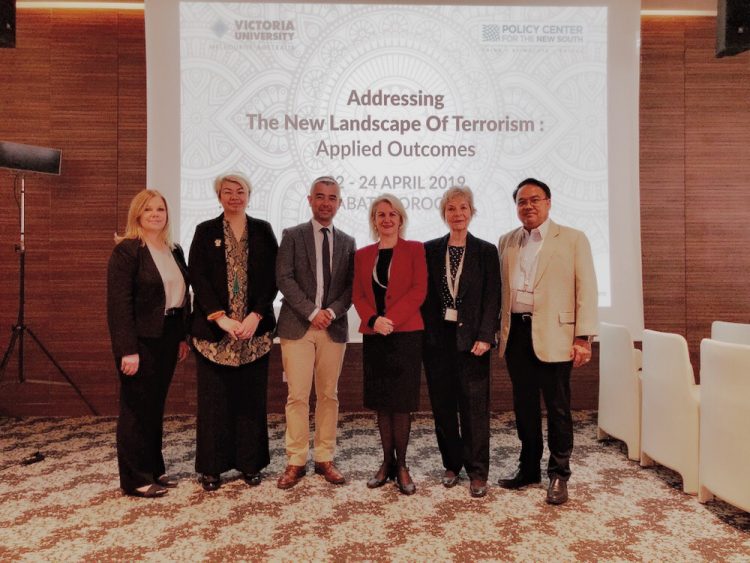 Building upon the Melbourne (2016) and Bangkok (2017) conferences, the third edition of the Addressing the New Landscape of Terrorism international conference series took place from 22 – 24 April 2019 in Rabat, Morocco.

VOX-Pol Academic Advisory Board member Dr. Brigitte Nacos (Columbia University) delivered a keynote presentation at the event. Her address provided a historical overview of the importance of propaganda in terrorism. She demonstrated that although social media platforms offer new opportunities to terrorists, up to the live streaming of horrific attacks, mainstream media with its online presence remains an important means of communication to spread terrorist propaganda in direct and indirect ways. Dr. Nacos also chaired a conference panel on news coverage of terrorism and its effects.

The conference was organised by Victoria University, in partnership with the Policy Centre for the New South (PCNS) with the support of the Australian Department of Foreign Affairs and Trade, the National Broadcasting and Telecommunication Commission of Thailand, the Belgian Flemish Department of Education, the African Union, iDove, and VOX-Pol. Simultaneous translation was available into Arabic, English, and French.

A special focus for this third conference in the series was on practitioners and policy-makers involved in CVE, especially youth CVE practitioners.  There were plenary sessions led by a panel of experts on the themes of returning foreign fighters and disengagement, homegrown terrorism, the impact of media terrorism reporting, the importance of civil society in preventing and countering violent extremism, and youth mental health and countering violent extremism.

What Does the 'New Right' Have to do With the Christchurch Attack? Some Evidence from Twitter on Discursive Overlaps

Who Supports Dissident Irish Republicanism? A  Snapshot of Sympathisers on Facebook in 2015