Welcome to Volume 7 Issue 1 of the VOX-Pol Newsletter.

On 4 March 2020, VOX-Pol published its latest report, The Legal Response of Western Democracies to Online Terrorism and Extremism and Its Impact on the Right to Privacy and Freedom of Expression, written by VOX-Pol Research Fellow and human rights attorney, Nery Ramati. The report addresses the legal responses of six countries: France, Germany, Israel, Spain, UK, US, as well as the UN and EU, to online terrorism and extremism.

Extremists and terrorists have found the online sphere, and specifically its social networks, to be an efficient tool for advancing their methods and political needs. The legal responses to the resulting threats from this online activity vary from country to country. The immense importance of the Internet in the everyday life of billions of people worldwide has raised difficult questions regarding the attempt to regulate online activity, especially in relation to the right of privacy and freedom of speech. This report examines how western democracies balance, from a legal point of view, the need to protect their populations from terrorist attacks and their duty to preserve the democratic rights of privacy and free speech. 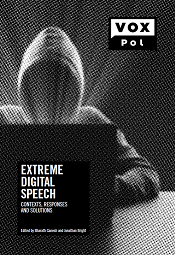 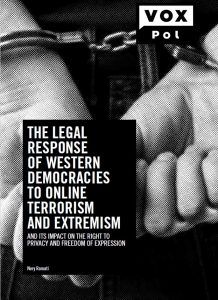 EDS is an emerging challenge that requires co-ordination between governments, civil society and the private sector. In this report, a range of experts on countering extremism consider the challenges that EDS presents to these stakeholders, the impact that EDS has and the responses taken by these actors to counter it. By focusing on EDS, consideration of the topic is limited to the forms of extreme speech that take place online, often on social media platforms and multimedia messaging applications such as WhatsApp and Telegram. Furthermore, by focusing on EDS rather than explicitly violent forms of extreme speech online, the report departs from a focus on violence and incorporates a broader range of issues such as hateful and dehumanising speech and the complex cultures and politics that have formed around EDS.

The concept of global extreme speech is developed under Project ONLINERPOL funded by the European Research Council and hosted at LMU Munich, where contributing author Matti Pohjonen is a cooperation partner. 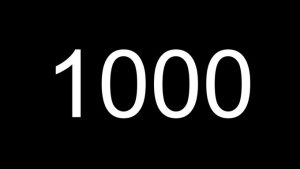 We’re delighted to announce that VOX-Pol’s Online Library, a research and teaching resource composed of a searchable catalogue of links to publications on various aspects of online extremism and terrorism, has reached 1,000 entries! Visit the library HERE.

VOX-Pol are launching a new online resource on the website, titled Researcher Resources.

We invite you to contribute to this resource by emailing info@voxpol.eu with your most useful and essential research resources on the topics of: ethics; researcher welfare; data collection and analysis tools; open access datasets; conferences and summer schools; publication venues (journals and blogs); and podcasts.

This study investigates the health and wellbeing of the Metropolitan Police Counter Terrorism Internet Referral Unit (CTIRU) case officers from their own perspective. In-depth qualitative semi-structured interviews were conducted with 11 Metropolitan Police Counter-Terrorism Internet Referral Unit case officers. The aim of the research is to investigate and describe the types of stressors and stress experienced by CTIRU case officers, the sources of that stress and the coping mechanisms employed. The study also looks at what type of occupational-health support is provided, and what is required by the CTIRU case officers.

Professor Maura Conway, VOX-Pol Coordinator, and Professor Stuart Macdonald, Director of the Swansea University’s Cyber Threats Research Centre, edited the book Islamic State’s Online Activity and Responses, which provides a unique examination of Islamic State’s online activity at the peak of its “golden age” between 2014 and 2017, and evaluates some of the principal responses to this phenomenon. The chapters were originally published as a special issue of Studies in Conflict & Terrorism.

Featuring contributions from experts across a range of disciplines, the volume examines a variety of aspects of IS’s online activity, including their strategic objectives, the content and nature of their magazines and videos, and their online targeting of females and depiction of children. It also details and analyses responses to IS’s online activity – from content moderation and account suspensions to informal counter-messaging and disrupting terrorist financing – and explores the possible impact of technological developments, such as decentralised and peer-to-peer networks, going forward. Platforms discussed include dedicated jihadi forums, major social media sites such as Facebook, Twitter, and YouTube, and newer services, including Twister.

VOX-Pol is pleased to present a new, open-access chapter in the publication The Human Factor of Cybercrime, edited by Rutger Leukfeldt (Hague University of Applied Sciences) and Thomas J. Holt (Michigan State University).

Chapter 13 on ‘The Roles of ‘Old’ and ‘New’ Media Tools and Technologies in the Facilitation of Violent Extremism and Terrorism’, written by VOX-Pol Research Fellow Dr. Ryan Scrivens (Michigan State University) and our Coordinator, Professor Maura Conway (Dublin City University), was made open access on 16 December 2019.

“We’re really pleased with this chapter, which starts by addressing extremists’ and terrorists’ early low-tech communication methods or what we term ‘pre-media,’ then other relatively low-tech tools, such as print and photocopying. The high-tech tools reviewed are film, radio, and television, followed by the Internet, especially social media. Given the breadth of coverage, we think this could be really useful for, especially, teaching purposes,” said Prof. Conway.

A spotlight on recent news items featuring VOX-Pol collaborators and their research.

Technology and the Swarm: A Dialogic Turn in Online Far-Right Activism