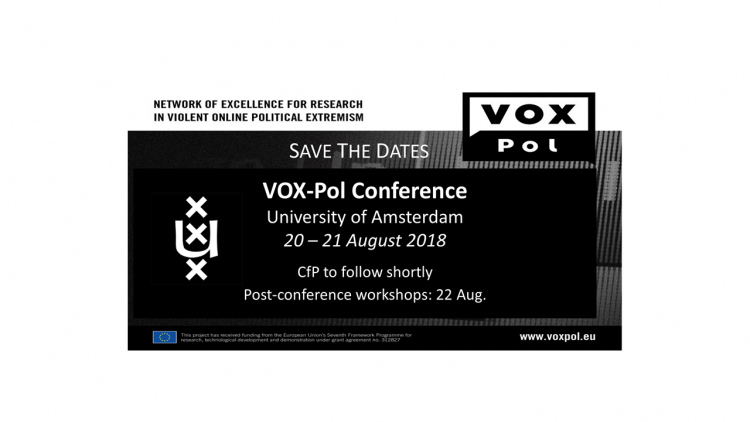 Welcome to Vol. 5 Iss. 1 of the VOX-Pol Newsletter.

This is VOX-Pol’s fifth year in operation; thanks for supporting us over the last four years.

If you have colleagues or friends who may be interested in the content of our newsletter, or any events or research carried out by VOX-Pol, please forward this to them and encourage them to subscribe via our website.

In particular, please update any interested colleagues about our two-day conference on 20 – 21 August at the University of Amsterdam, with post-conference workshops on 22 August. More details shortly!

We are pleased to announce that the third biennial VOX-Pol Conference will take place at the University of Amsterdam on 20 – 21 August, with post-conference workshops on 22 August 2018. The Call for Papers and other details will appear HERE  shortly.

To get a feel for past conferences, check out the programmes, keynotes, workshops, etc. for our 2016 conference at Dublin City University HERE and our 2014 conference at King’s College London HERE.

VOX-Pol hosted a workshop on 22 – 23 January 2018 at Dublin City University titled ‘Similarities and Differences between Online Terrorism and Online Child Sexual Abuse and their Implications’ to discuss overlapping concepts, tools, and strategies to tackle violent online political extremism and online child sexual exploitation. Participants included scholars, representatives from social media companies, NGO representatives, and law enforcement. VOX-Pol will be producing a report on the topic within the coming months. Further information about the event is available HERE.

VOX-Pol’s Prof. Maura Conway and Lisa McInerney participated in an event hosted by The Global Internet Forum to Counter Terrorism (GIFCT) on 6 December 2017, at Google’s Brussels’ offices. The event featured representatives from GIFCT founder companies, Google, Facebook, Microsoft, and Twitter, along with representatives from the EU Commission, EUROPOL, ICT4Peace, CDT, and others. Prof. Conway, participated in a panel discussion and Q&A, which focused on the perspectives of stakeholders from academia, industry, and civil society on the fight against online terrorist propaganda. Issues raised in the panel discussion included the online activity of both IS and the extreme-right, content takedown and its impacts on freedom of expression, and the difficulties and opportunities of engaging in research on extremism, terrorism, and the Internet.

VOX-Pol was represented by Prof. Maura Conway and Lisa McInerney, at the third Ministerial meeting of the EU Internet Forum held in Brussels on 6 December 2017. The aim of the meeting was to take stock of the progress made over the past year on curbing terrorist content online and to decide on next steps in this area. The Forum highlighted the need to exploit the now fully-operational database of known terrorist content (database of hashes). The database was launched in spring 2017 and now comprises over 40,000 hashes of known terrorist videos and images. The European Commission’s official press release about the event may be accessed HERE. At a follow-up meeting, the Third Senior Officials’ Meeting of the Forum, on 5 February 2018, Prof. Conway presented VOX-Pol’s Violent Extremism and Terrorism Online In 2017: The Year In Review, which will appear in our website shortly.

On 16 November 2017, Dublin City University’s Dr. James Fitzgerald and University College London’s Dr. Paul Gill represented VOX-Pol at an open meeting of the United Nations Security Council’s Counter-Terrorism Committee’s Global Research Network at the UN Headquarters’ in New York. The meeting focused on recent trends in terrorism and counter-terrorism. The aim of the meeting was to identify research gaps and prioritise areas of work with respect to implementing relevant Security Council Resolutions.

VOX-Pol Researcher, Dr. Paul Gill was was quoted in ‘How the London Mosque Attacker became a Terrorist in Three Weeks‘, The Guardian, 1 February 2018.

In addition, Dr. Gill was interviewed for the BBC Special Investigations programme ‘Terror By Text‘ first broadcast on 6 September 2017, but now available online.