The VOX-Pol Network of Excellence is a European Union Framework Programme 7 funded academic research network focused on researching the prevalence, contours, functions, and impacts of Violent Online Political Extremism and responses to it. It is a five-year programme which commenced on 1 January, 2014.

We hope you enjoy reading the Newsletter and welcome any feedback you may have.  If you have colleagues or friends who may be interested in the content of this newsletter, please forward it to them and encourage them to subscribe via our website.

Practitioners in fields related to Violent Online Political Extremism have the opportunity to attend VOX-Pol’s first Training Academy scheduled to start next month in Spain. The week-long event is tailored specifically for those professionally tasked in the area of violent online political extremism, such as law-enforcement personnel and policymakers.

Approximately 24 places are available at the Academy, and they are filling up fast. If you are professionally tasked in the area of violent online political extremism, and are interested in participating in the Academy, we will be happy to hear from you. Please send us an email: trainingacademy@voxpol.eu

This autumn, VOX-Pol will host a Lunchtime Briefing Series at a central London venue. Each week, for six weeks, academic experts will address a different aspect of violent online political extremism. Themes [TBC], will include lone actors and online influences; violent jihadism online; the role of Social Media companies; and the ethics of policing and monitoring violent extremist content, amongst others. Speakers will join us from a variety of European locations. Please email us at lunchbriefingseries@voxpol.eu if interested in receiving further information.

VOX-Pol will soon release two publications arising from workshops we hosted within the past year: Behavioural Underpinnings of Violent Online Political Extremism in Berlin in December 2014, and the Workshop on the Ethics and Politics of Online Monitoring of Violent Extremism in Brussels in January 2015. The first publication, ‘What Are the Roles of the Internet in Terrorism?: Measuring Online Behaviours of Convicted UK Terrorists’, is co-authored by Paul Gill, Emily Corner and Amy Thornton of University College London, a VOX-Pol partner institute. The second publication, based upon discussions at the Berlin workshop, ‘Check the Web: Assessing the Ethics and Politics of Policing the Internet for Extremist Material’, is co-authored by Ian Brown and Josh Cowls of the Oxford Internet Institute, also a VOX-Pol partner. Once published, we will make the reports freely available. 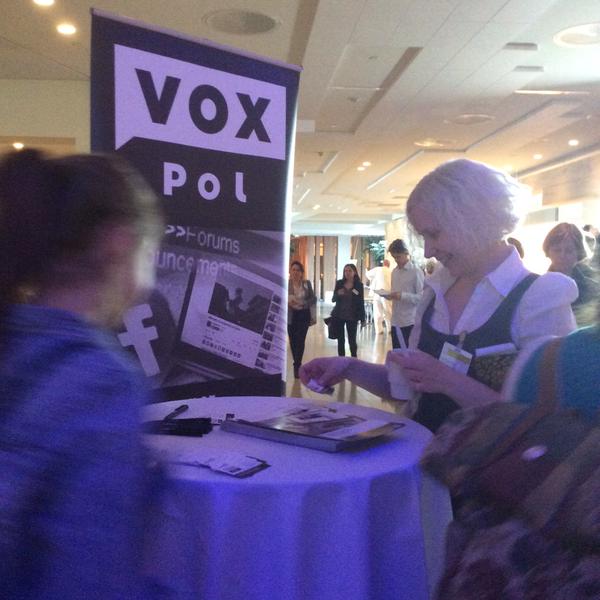 It has been a busy quarter for VOX-Pol, having contributed to more than a dozen events related to violent online political extremism, in various cities across Europe.

In May, as part of its student outreach programme, VOX-Pol hosted a group of eighteen students studying ‘Radicalism and Revolutions’ at the University of South Dakota, United States. VOX-Pol Programme Manager, Lisa McInerney, met the students in Dublin City University, and introduced them to VOX-Pol’s objectives, activities, and research output. She also spoke to them about use of the Internet by various political violence actors. Also in May, VOX-Pol Coordinator, Dr. Maura Conway attended the 7th European Forum of the Family Online Safety Institute in Brussels at the invitation of FOSI. At the end of the month Dr. Conway participated in a two-day meeting in Prague hosted by the Insafe Network of Safer Internet Centres.

In June, VOX-Pol participated in the Youth Against Violent Extremism conference in Oslo, organised by the Institute for Strategic Dialogue and the Norwegian Ministry of Foreign Affairs. The two-day event was attended by 150 civil society organisations from across Europe, and also a large number of policymakers and politicians from the region. Dr. Conway addressed the gathering of policymakers, emphasising the importance of, and necessity for, rigorous research into violent online political extremism to appropriately meet the many challenges it poses to societies today. Also in June, Dr. Conway attendedthe 12th annual US-Islamic World Forum in Doha organised jointly by the Brookings Institution and the State of Qatar. Dr. Conway, along with colleagues from VOX-Pol partner ICSR at King’s College London, were invited to participate in the Working Group, ‘Here to Stay and Growing: Combating ISIS Propaganda Networks‘, which explored how the United States and the international community can adopt more effective and systematic approaches to countering IS propaganda.

Also in June, VOX-Pol participated in the [Y] Factor Conference in Brussels. Lisa McInerney gave a presentation on VOX-Pol, and the use of the Internet by violent political extremists, and outlined some of the challenges relating to the development of appropriate responses to Internet content aimed at mobilising youth. On 26 June, Dr. Conway contributed to the EU Member States’ Annual Meeting on the UNSCR 1325 where she gave a presentation on  ‘Women, Terrorism and the Internet’ focusing on the so-called ‘Islamic States’’ online outreach to women and girls. At the end of the month, Lisa McInerney participated in the Summer Program on Advanced Topics in Internet Governance organised by VOX-Pol partner, Central European University, in Budapest. Together with CEU’s Kate Coyer, Lisa spoke to participants on researching violent online political extremism, and the VOX-Pol project in general.

In July VOX-Pol participated in a meeting of the Radicalisation Awareness Network at the Institute for Strategic Dialogue in London. Lisa McInerney and VOX-Pol Research Fellow, Nico Prucha, both spoke at the meeting, setting the scene for a session devoted to an overview, and further development of innovative CVE initiatives.

Dr. Prucha also gave a public talk in July organised by VOX-Pol partner institute, International Centre for the Study of Radicalisation (ICSR), at King’s College London. The talk, which focused on the symbiotic relationships between ideology, media content and strategic action, and on how different messages are targeted at different audiences, was broadcast live on Periscope to wide enthusiasm. An audio recording of the talk is available here.

Dr. Paul Gill, Senior Lecturer in Security and Crime Science at VOX-Pol partner institute, University College London, also gave a well-received public lecture at ICSR in July. Paul’s talk focused on the empirical realities of ‘Lone Actor’ terrorism and the lack of a single profile of a ‘Lone Actor’, and illustrated some of the novel trends and patterns that are discernible from detailed empirical studies of this phenomenon. Listen to an audio recording of the lecture here.

The International Centre for Counterterrorism in The Hague published a research paper in June 2015 by, Dr. Alex Schmid, a member of VOX-Pol’s Academic Advisory Board. The paper, Challenging the Narrative of the “Islamic State”, discusses how ISIS has brought terrorist propaganda to a new level and how governments have generally struggled to counter the ISIS narrative with persuasive counter-arguments. The report identifies dominant narrative themes used by ISIS and discusses them from theological, historical and other angles to show vulnerabilities and point the way towards developing convincing counter-arguments. Read the full report here.

In late July VOX-Pol Research Fellow, Dr. Nico Prucha, and, Ali Fisher, Principle Data Scientist, VORTEX, University of Vienna, were interviewed by SciDev.Net on the topic of how ‘media mujahideen’ of ISIS use modern technology to create filMs. that work as highly effective propaganda for the group. Listen to the full interview here.

On July 24, Dr. Jonathan Bright, a Research Fellow at the Oxford Internet Institute, a VOX-Pol partner institute, contributed to an article in The Irish Times on the subject of online arguments: ‘Why do we argue online?’ Read the full article here.

In June UNESCO launched a report, Countering Online Hate Speech, examining what ‘hate speech online’ means, and what can be done to deal with it effectively. The 73-page report is part of UNESCO’s Series on Internet Freedom, and was co-authored by Oxford University’s Research Fellow in New Media and Human Rights, Ignio Gagliardone and others. Read the full report here.

On 22 July 2015, The World Post published an article by Prof. Philip Seib, a VOX-Pol Ethics Advisory Board member. The article, ‘The Allure of ISIL’s Caliphate’, discusses the various reasons people from across the world are being drawn to join the so-called Islamic State. Read the full article here.

VOX-Pol Research Fellow Dr. Nico Prucha is publishing a series of articles under the title, Unholy War, for the Austrian branch of Neue Züricher Zeitung (NZZ.at) First in the series, ‘Twitter und der Mediendschihad’ [‘Twitter and the Media Jihad’], was published on 23 June 2015. Read the full article here.

Dr. Alexander Meleagrou-Hitchens from VOX-Pol partner institute ICSR at KCL, addressed a high-level UNDP meeting in Nairobi in June 2015. Dr. Meleagrou-Hitchens updated the meeting on his research on former members of al-Shabaab, the emerging problem of radicalisation in Africa, and highlighted the new strides being made by the VOX-Pol network in increasing understanding of the phenomenon of radicalisation.

In July VOX-Pol welcomed Elizabeth Pearson, who joined the Network as a visiting researcher under the Researcher Mobility Programme. Ms. Pearson’s successful application to work with VOX-Pol focused on using gender to explore differences in content and behaviour between self-identifying male and female supporters of ISIS on Twitter. She was based in Dublin City University for the duration of her stay, and is undertaking her VOX-Pol research under the supervision of Dr. Maura Conway.

Ms. Pearson is an ESRC-funded MPhil/PhD student at Defence Studies, King’s College London. Her research focuses on understanding how gender factors in radicalisation to both Jihadi and far-right movements in both online and offline spaces. She is also a member of the Nigeria Security Network and has written and commented on gender-based violence and Boko Haram for outlets including The International Business Times, African Arguments, War on the Rocks, Huffington Post, AFP, Washington Times, Newsweek, Daily Mail, Daily Beast, Deutsche Welle, AFP, BBC World Service, BBC World, CKNW and Five Live.

Opportunities for research visits under VOX-Pol’s Researcher Mobility Programme are open all year round. For details of this and other opportunities with VOX-Pol, visit our website and/or contact us at: rmp@voxpol.eu.

Drawing the Line Between Free Speech and Online Radicalisation