Year 1 of VOX-Pol was a resounding success. In the 12 months to December 2014, we hosted three events to which we welcomed 163 attendees from 24 countries (12 EU Member States and 12 non-EU countries).

Our website has gathered 20,000 page-views by 5,000 visitors from 117 countries, aided by the launch of the VOX-Pol Blog, contributions to which are welcomed.

By year end this Newsletter had nearly 600 subscribers and we were well on our way to our 500th Twitter follower.

2015 has gotten off to an encouraging start also. We hosted a successful January workshop in Brussels and look forward to our next event in Budapest in early March; details of both workshops are below.

A series of free-to-access publications arising from our research and activities will begin to appear on our website shortly, along with information regarding forthcoming events.

We want to thank all those who worked with us in 2014 and invite you to continue to do so in 2015. As before, we welcome any feedback and suggestions you may have.

On March 5-6 VOX-Pol will convene a workshop at Central European University in Budapest on the role of social media and Internet companies in responding to violent online political extremism and the impacts on freedom of expression. Events in Paris in January 2015, followed by the Joint Statement of EU Ministers for Interior and Justice expressing concern at the ‘increasingly frequent use of the Internet to fuel hatred and violence’, make the forthcoming workshop especially timely.

The event has an exciting line-up of speakers including Rebecca MacKinnon, founder of Global Voices Online, who recently testified at the US Senate House Committee on Foreign Affairs on ‘The Evolution of Terrorist Propaganda’.

MacKinnon is director of the Ranking Digital Rights project and author of Consent of the Networked: The Worldwide Struggle For Internet Freedom (2012).

Along with representatives of major social media companies and law enforcement, other speakers will include:

WORKSHOP ON ETHICS AND POLITICS OF ONLINE MONITORING OF VIOLENT EXTREMISM

The second in Vox-Pol’s workshop series, on the ethics and politics of online monitoring of violent extremism, took place in Brussels from 19-20 January. Around thirty experts – from law enforcement and intelligence agencies, governments and parliaments, civil society, and universities – met for two days to discuss the challenges that had dominated the news since the Charlie Hebdo murders the previous week. Short versions of ten papers were presented to stimulate discussion. These ranged from discussion of the problems with the commonly-used term “radicalisation”, to individual cases, such as the Internet usage of Anders Behring Breivik before his atrocities in Norway, and Hamas during the 2008-2009 war in Gaza. They included analysis of the changing uses of technologies for monitoring situations and individuals of concern, and also considered legal protections for human rights at the national, European, and international level. An overview of the workshop by its organiser, Prof. Ian Brown (OII), is now available on our blog. A project report on the subject of the workshop will be published in April.

PANEL ON MONITORING THE NET FOR VIOLENT EXTREMIST MATERIAL, CPDP 2015 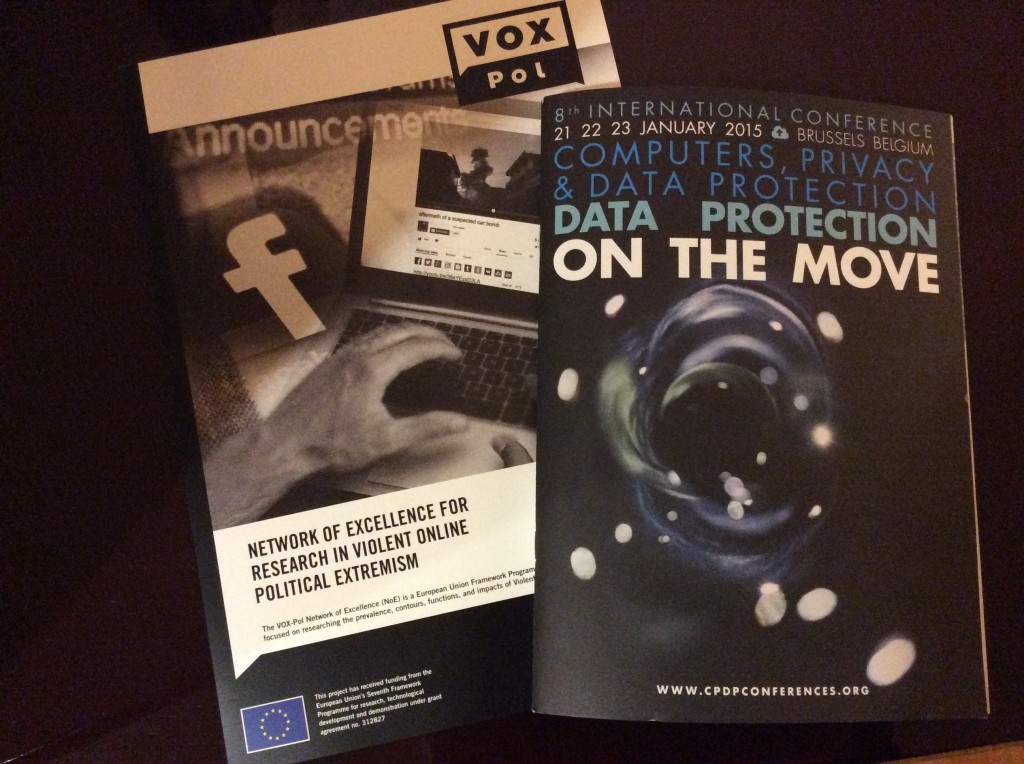 The 8th International Conference on Computers, Privacy and Data Protection (CPDP) took place in Brussels from 21-23 January, attracting over 1,000 privacy researchers, regulators, and policymakers. VOX-Pol organised a packed-out panel discussion at the conference. There was standing room only at the panel where four of the workshop speakers brought outcomes of the workshop to a much larger audience.The panel comprised contributions from Ian Brown of the Oxford Internet Institute, Sadhbh McCarthy, Centre for Irish and European Security, TJ McIntyre, University College Dublin, and Robindra Prabhu, Norwegian Board of Technology. It was chaired by Pete Fussey of the University of Essex and moderated by Maura Conway of Dublin City University.Here is a full video of the panel, which can also be viewed on VOX-Pol’s YouTube channel:

The first in a series of VOX-Pol workshops, exploring ‘The Behavioural Underpinnings of Violent Online Political Extremism’ workshop, was held in Berlin, Germany, on 2 and 3 December 2014. The two-day workshop brought together participants from police, intelligence services, security experts, and academics who discussed how (if at all) individuals convicted of terrorism related offences use the Internet, correlations in their behavioural characteristics, and how those behaviours can be detected, prevented, and disrupted. The research upon which the workshop was based is being undertaken by Dr. Paul Gill and colleagues at University College London and will be published later in the year.

‘Lone- Actor Terrorists’ (London: Routledge) by Paul Gill, Lecturer at the Department of Security and Crime Science at VOX-Pol partner University College London, was published in January 2015. The book is a study of 110 lone actors which, adopting insights and methodologies from criminology and forensic psychology, provides a holistic analysis of the behavioural underpinnings of lone-actor terrorism. Dr Gill devotes a chapter to ‘The Role of the Internet’ in affecting the behavior of various individuals in the dataset.

Daniela Pisoiu and Felix Lang, 2014, ‘The porous borders of extremism: Autonomous nationalists at the crossroad with the extreme left’, Behavioural Sciences of Terrorism and Political Aggression, 7(1)

In January VOX-Pol’s Principle Investigator Dr. Maura Conway and Prof. Ian Brown of the Oxford Internet Institute (OII), appeared on VRT, Belgium’s Flemish language public broadcaster. Prof. Brown and Dr. Conway discussed the role of the Internet in violent extremism and the social media strategies of radical groups such as the so-called ‘Islamic State’ (IS).

On 16 January 2015 University World News published ‘Paris attack creates challenges for universities’, in which VOX-Pol and  the forthcoming workshop in Budapest were highlighted.

In July 2014, VOX-Pol published a Call for Proposals for a Research Fellowship under its Researcher Mobility Programme. We were delighted to welcome Dr. Nico Prucha (PhD, University of Vienna, 2014) on board in December. Nico chose the ICSR at King’s College London as his host institution where he is currently working on his research into ‘Viral Aspects of Jihadism: The Lingual and Ideological Basis of Online Propaganda and the Spill Over to Non-Arabic Networks.’ Interested in a similar 12-month placement in a VOX-Pol partner institution? We will issue a new Call for Proposals for the 2015 VOX-Pol Research Fellowship mid-year.

VOX-Pol’s Researcher Mobility Programme also incorporates a Researcher Exchange Programme (REP). The REP provides support for researchers from non-partner institutions to collaborate with colleagues in VOX-Pol partner institutions. Recently, the REP together with the ESRC Centre for Corpus Approaches to Social Science (CASS) at Lancaster University, facilitated a collaborative research partnership between CASS and King’s College’s ICSR. The joint research project, focused on mapping the networks in which UK-based far-right Twitter accounts operate, kicked-off in January. The research team comprises Joseph Carter (Research Fellow at ICSR), Mark McGlashan (Senior Research Associate at CASS), and Alexander Meleagrou-Hitchens (Head of Research and Information at ICSR). Their research will provide a snapshot of the online behaviour of those who affiliate with the UK far-right online. Findings from the research will be able to be used by policymakers, academic and non-academic audiences, and for further collaborative research.

Interested in collaborating with colleagues in a VOX-Pol partner institution? Email us at info@voxpol.eu

Check the Web: Assessing the Ethics & Politics of Policing the Internet for Extremist Material

Social Media and the Rise of the Islamic State in 2014