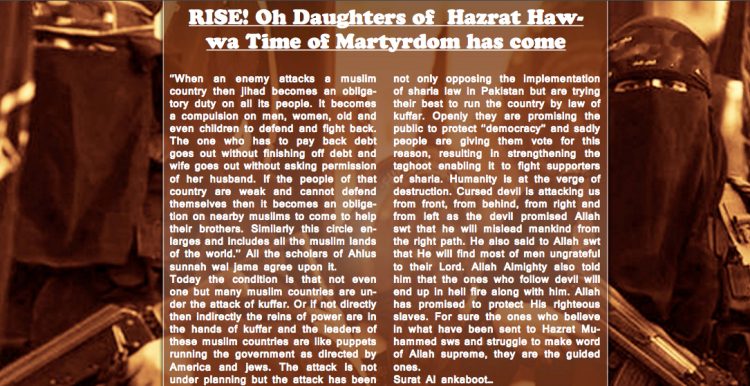 Daesh and Tehrik-e-Taliban Pakistan (TTP) are two competitor militant organisations in Pakistan. Although, Daesh has no organisational presence in the country, small groups inspired by it have carried out attacks in the name of the organisation. Both organisations publish propaganda magazines to, amongst other things, gain new recruits. While Daesh published approximately one item targeting women in each issue of Dabiq and, later, Rumiyah, TTP launched a magazine ‘exclusively for women’ called Sunnat-e-Khola. The magazine, which was launched in August 2017 and is named after a 7th century female Muslim warrior who is said to have fought side-by-side with Prophet Muhammad in the holy wars, has published two issues so far. Breaking away from its traditional anti-women stance, this TTP publication proclaims women an integral part of jihad and says the war against its enemies cannot be won without their support. The magazine encourages women’s involvement in every stage from radicalisation to planning and facilitation to execution of attacks.

An analysis of militancy shows that women are crucially important for the existence and operational success of militant organisations. They have proved to be extremely effective partners in conflict zones both in facilitating and carrying out attacks. In the domestic sphere, they supply brides for militants, encourage their sons to be teenage bombers, support terrorist husbands to be steadfast, and influence other women to join the jihadi club. In operational terms, they collect funds, supply food, and provide logistical support (e.g. carrying weapons, exchange of important information). Female jihadists actively participated in the communal conflict in Poso and Maluki in Indonesia from 1998 to 2002, for example. They prepared homemade explosives, and provided logistical support to fighters. Therefore, women are also an audience for both Daesh and TTP’s propaganda message.

In many ways, from form to content, Sunnat-e-Khola is a repetition of Rumiyah’s female-targeted propaganda. Six themes appear repeatedly in both magazines: 1) be obedient wives, 2) bear more children, 3) donate for jihad, 4) support polygamy, 5) call for migration to the so-called ‘Khilafah,’ and 6) support their husbands in the cause of jihad. To substantiate the argument, both magazines quote extensively from the Quran, Sunnah (words and actions of Prophet), and early history of Islam.

High standards of piety and sacrifice are encouraged via the sharing of anecdotal accounts of women from the early history of Islam. In Sunnat-e-Khola, Mulla Fazlullah narrates:

Requests for women’s patience are also commonplace; the following is from Issue 11 of Rumiyah: “bear with patience whatever befalls you…be eager to give what­ever it takes to attain the pleasure of your Lord and be ready to sacrifice the dearest and most precious things in your life.”

Importantly, while both Daesh and TTP preach that the basic responsibility of women in jihad is to be obedient wives and bear children, TTP takes it to another level by encouraging women’s more active engagement in Jihad.  Although in issue 12 of Rumiyah, Daesh called women to actively support Jihad and participate in the fight, this appears to have been an ad hoc or tactical measure. Primarily, because at this time Daesh was losing territory and fighters at a rapid pace and were thus in a fairly desperate situation. Second, in the same issue it stated that if women obey their husbands then it is equal to fighting and achieving martyrdom: “Convey to the women my greetings and say to them, ‘Indeed, obeying one’s husband is equal to that [in rewards].” Third, in the very next issue of Rumiyah, the message for women was again about migration and raising children in the Khilafah and there was no mention of active female jihad.

TTP, on the other hand, encourages women to leave the boundaries of their houses and actively promote jihad.  Issue 1 of Sunnat-e-Khola calls women to publish and distribute jihadi literature, preach jihad to other women, organise secret gatherings of women at home, train women in weapons handling, and donate money. At the operational level, it encourages women to provide food in hideouts, transport weapons, including suicide vests, and act as spies, including collecting information about sensitive locations for attacks. It also calls on female members of the Pakistani army to work for the Taliban by providing sensitive information, especially about high profile or sensitive locations. This detailing of roles and activities reflects how TTP have clearly strategised women’s participation.

TTP go even further however. Unlike Rumiyah, both issues of Sunnat-e-Khola published to-date are consistent in their calls for active and combat roles for women, a major strategic shift in the organisation. In the first issue of Sunnat-e-Khola, a writer mentions a female squad of suicide bombers who are ready to give their lives for Jihad. Women are not only told to join TTP, but are recognised in the magazine’s pages as integral to it: “It is simply impossible for us to be successful in our goal of bringing law of Allah in power in Pakistan and fight off taghut [sic] without help of our pious Muslim women” (Issue 1, p.29). To support active participation, Fazlullah asserts that Muslim women who are Mujahida (female fighters) and Muhajira (female migrants) have religious honour while those Muslim women who are fighting for the Pakistani army or police or, indeed, the US military, have no honour (Issue 1, p.12).

Breaking away from their long-held position of disinterest in an active role for women in violent Jihad, the message contained in Sunnat-e-Khola may forecast a new chapter for terrorism in Pakistan. The as yet non-appearance of a third issue of the female-centered magazine may indicate that issues one and two did not have the desired response however and that an enhanced role for women in the TTP is frowned upon by a mass of their supporters.

Mehwish Rani is a student on the Erasmus Mundus International Masters in Security Intelligence and Strategic Studies (IMSISS), to which VOX-Pol is a contributor. Her research interests are women and conflict, counter-terrorism, and countering violent extremism. Follow her on Twitter: @mehwishrani8652.

On our Blog, a #longread by UniLeiden’s @markdechesne on the DARE project’s work on online extremism, including the… https://t.co/A4VdlYwUU9
- Tuesday Oct 27 - 3:17pm

An earlier version of the article appeared as a #openaccess @VOX_Pol reports in both English… https://t.co/lFauVezIzb
- Tuesday Oct 27 - 12:22pm

FacebookTwitterLinkedinPinterestemailBy Sian Tomkinson, Katie Attwell and Tauel Harper In May 2020, a 17-year-old boy in Toronto was charged with an act of terrorism in...
Read 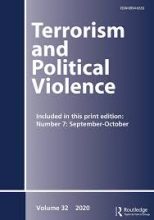 Turning the Tap Off: The Impacts of Social Media Shutdown After Sri Lanka’s Easter Attacks

Artificial Intelligence and the Future of Online Content Moderation