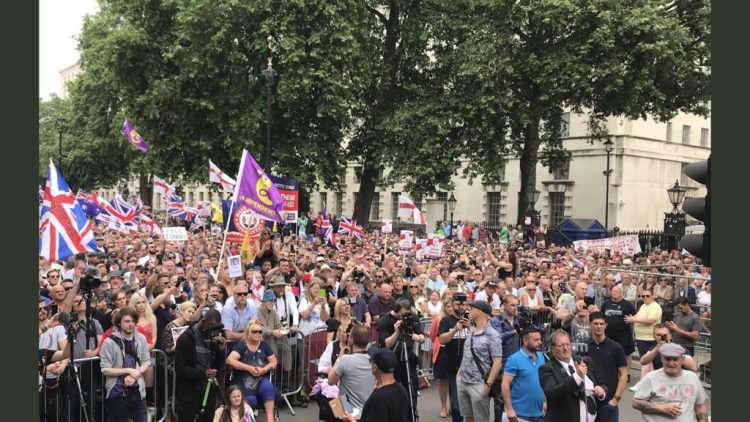 The 9th of June saw one of the most prominent far-right mobilisations of the year. Assembling in Trafalgar Square, hundreds of demonstrators turned out to protest the arrest and imprisonment of former English Defence League (EDL) leader, Tommy Robinson (real name Stephen Christopher Yaxley Lennon), for contempt of court after he broadcast live outside a rape trial in Leeds. Such has been the prominence of his arrest that anti-Islam campaigner and leader of the Dutch Party for Freedom, Geert Wilders, spoke at the demonstration. Meanwhile, Donald Trump’s son, Donald Junior, lent his support – tweeting: ‘Reason #1776 for the original #brexit’. Moreover, and after a UK parliamentary e-petition was rejected, a Change.org petition – asking supporters to ‘stand together, stand strong, and stand by [Robinson’s] side’ – has accrued over 600,000 signatures, demonstrating the rallying and unifying effect Robinson still possesses nearly five years after leaving the anti-Islam protest movement EDL.

Since Robinson’s departure from the EDL in 2013, however, the UK far right has changed significantly. Several groups, including Britain First, National Action (alleged members of which are currently on trial for plotting to murder a West Lancashire MP) and the Football Lads Alliance, have taken the EDL’s place but have rarely been able to reach the size the EDL achieved at its peak, both in terms of protest numbers and sustained media attention. Moreover, the use of social media and the internet has become a much more prominent part of the UK far right’s political playbook – with group’s like Britain First using Facebook and sites like LiveLeak to broadcast protests, ‘Christian patrols’, and ‘mosque invasions’ online to thousands of viewers across the world. Since the EDL, the emphasis, therefore, has been less on mass protest and more on how many followers, ‘likes’ and retweets a particular group receives.

Whilst this is to a large extent still true, with such groups remaining trivial in terms of electoral relevance and popularity, events in the past few months have led the UK far right back onto the streets – deploying a more traditional style of ‘march and grow’ politics reminiscent of the 1970s-era National Front. In March 2018, Britain First and its leaders were banned from Facebook for ‘repeatedly post[ing] content designed to incite animosity and hatred against minority groups’. This came as part of a wider crackdown by social media platforms – with Tommy Robinson and Britain First Twitter accounts suspended last year under new rules concerning inappropriate content and behaviour. Such bans haven’t been 100 percent watertight, however. Tommy Robinson’s official Facebook page still has nearly 890,000 followers and continues to sell his merchandise and message.

Another factor in this shift has been the rise of demonstrations by the anti-Muslim football hooligan protest collective, the Football Lads Alliance (FLA) and Democratic Football Lads Alliance (DFLA), as well as the pan-European ethno-nationalist movement, Generation Identity (GI), who believe that (mainly Muslim) migration into Europe is leading to a ‘great replacement’ of indigenous white citizens. In March 2018, for example, an estimated 5000 FLA and DFLA demonstrators descended on Birmingham in a sign of unity by ‘the football family against [Islamic] extremism’. Moreover, in May 2018, 2000–3000 far-right protestors – mainly composed of DFLA supporters – rallied at Speaker’s Corner in Hyde Park in a ‘March for Freedom’. Speaking alongside other alt-right vloggers, Tommy Robinson said: ‘The people of this country have been silenced for 20–30 years with the tag of racists…They now realise that that tag is dead: no one cares anymore with being labelled racists.’ Finally, in March again, 1000 protestors assembled in Hyde Park – this time under the auspices of GI – in the name of free speech.

The common thread running through these recent returns to mass street protests can be attributed to online crackdowns, but can also be directly linked to the role of Tommy Robinson in rallying and unifying the UK far right. After a failed attempt to create a UK chapter of the German anti-Islam protest group, Pegida, in early 2016, Robinson has remained a largely obscure character on the UK far-right scene – restyling himself as an alt-right ‘journalist’ and working for the Canadian far-right political and social commentary website, Rebel Media. After the suspension of his Twitter account and his exit from Rebel Media in February 2018, Robinson has, however, returned to his role as a key organiser within the UK far right – joining up with the DFLA and Generation Identity at their most recent protests to provide organisational and logistical support. Moreover, he has also been able to lend his intellectual weight to recent protests – with arguments about a police state and two-tier justice system key themes in his 2015 part-essay, part-autobiography, Enemy of the State. Finally, and in relation to Robinson’s recent imprisonment, the UK far-right scene now has a human representation of their main victimisation narrative. As Alexander Oaten argues in a 2014 research article on the EDL, collective victimhood helps to galvanise a movement around its core aims and goals, and helps to identify clear antagonistic Others (such as Islam and the State) to fight against. It was no surprise that Geert Wilders’ speech at the recent protest tried to tap into this, with him stating: ‘I am here to tell you that you will never walk alone. And we are here to tell the world, and the UK government in particular: “Free Tommy Robinson!”’.

In sum, then, whilst it might be too far-fetched to say that Robinson is the de-facto leader of the UK far right, his recent return to prominence is symbolic of a wider shift away from internet-based activism and back onto the UK’s streets. As far-right parties continue to struggle electorally, street protest has become the main form of activity for a new array of post-EDL groups to make claims about migration, so-called ‘Islamic extremism’ and anti-establishment concerns regarding claims on restrictions to freedom of speech. How long this nascent trend will last without the help of a key organiser, like Robinson, who is now serving a 13-month sentence, having pled guilty to the contempt of court charge, is difficult to predict. What is, however, demonstrated by this recent episode is the power of collective victimisation in amplifying the UK contemporary far right’s indignation and discontents – both within the UK and abroad.

Dr William Allchorn is a specialist on anti-Islam protest movements and radical right social movements in the UK and Western Europe. You can follow him on Twitter: @Willallchorn.

This article was originally published on Democratic Audit website. Republished here with permission.

Artificial Intelligence and the Future of Online Content Moderation