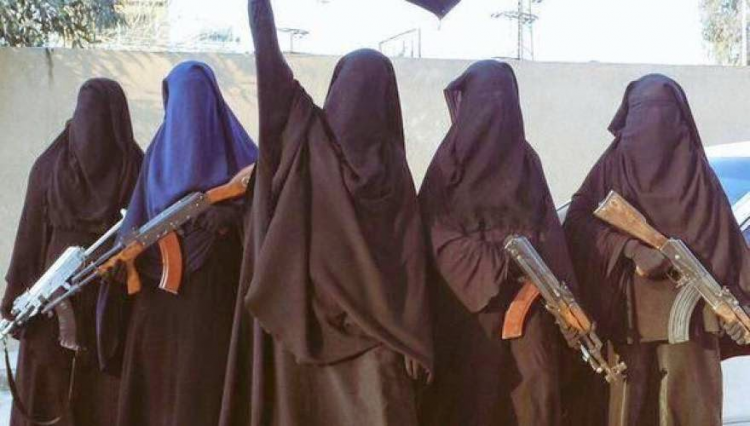 Since the self-proclaimed Caliphate’s inception, debate amongst scholars has ensued over whether the Islamic State’s (IS’s) muhajirat (female émigrés) would become female combatants. For example, Nelly Lahoud argues that IS is unlikely to devise a policy explicitly allowing women to engage in combat, as legitimating such a role would allow women to liberally explore their eros. Based on statements in IS’s official newsletter al-Naba, and magazine Rumiyah, Charlie Winter and Devorah Margolin suggest a shift in IS’s position, predicting a lift on its moratorium on female fighters, while Mia Bloom and Simon Cottee rebut this estimation, arguing that no interpretation of the two statements cited by Winter and Margolin can be deduced as formal declarations.

The seventh instalment of IS’s Inside the Khilafah video series details ongoing fighting between IS and the “crusader coalition.” Amongst depictions of struggle and sacrifice endured by male fighters confined to crutches and wheelchairs, the video portrays women in combat sacrificing themselves on the frontlines alongside men, as the narrator states, “Sons of the Khilafah rose as one body despite their wounds in response to the call of jihad. And following them, the chaste mujahidat women journeying to her Lord with the garments of purity and faith, seeking revenge for her religion and for the honour of her sisters imprisoned by the apostate Kurds.”

Yet, speculations continue over whether these are “actually” women fighting, or just men in disguise. While most contributions to these ongoing discussions make valuable points, they tend to conflate important analytical distinctions between what IS propaganda is trying to achieve, and on-ground realities. As a result, such debates inadvertently overlook a crucial lesson to be learned from IS’s information operations. Regardless of whether women are permitted to fight in reality or not, that IS has explicitly portrayed women in combat is telling of the group’s strategic logic behind the use of gender in its propaganda.

I analysed the contents of IS’s English-language magazines, Dabiq and Rumiyah, to initially examine how IS appeals to female audiences. I found that IS portray women in five key ways: “supporter,” “mother/sister/wife,” “victim,” “corruptor” and “fighter.” Each archetype is presented as belonging to one of two macro identities: the revered in-group (IS and IS-aligned Sunni Muslims who comprise the Ummah behind the Caliphate) or the malevolent out-group. IS’s messaging thus seeks to influence the construction of readers’ identities and catalyse radicalisation by compelling women to behave in accordance with in-group archetype expectations.

I further discovered, however, that these female archetypes are not only used in IS’s messaging to appeal to women but are leveraged in messaging targeted towards a presumably male audience as well as in female specific articles, with the purpose of simultaneously mobilising and inciting men to action. This thus signifies a symbiotic relationship between masculine and feminine gendered messaging and this symbiosis contributes towards maximising the overall efficacy of IS’s propaganda as a soft power tactic of mobilisation.

Four key trends emerge in IS’s use of female archetypes. Firstly, they are used to empower women. For instance, “supporter,” “mother,” “sister” and “wife” archetypes and stipulated roles which comprise their identities as “true” Muslim women are presented as equally important to the survival of the in-group as are male roles. IS undoubtedly recognises the strength in framing women as powerful contributors to the establishment and longevity of the Caliphate, rather than bombarding female audiences with narratives portraying women as vulnerable and in need of men’s help. Evidencing this, I quantitatively tracked IS’s use and prioritisation of female archetypes in Dabiq and discovered that “mother/sister/wife” and “supporter” portrayals feature most prominently in female-targeted messaging, such as in “From Our Sisters” and “For Women” articles.

Secondly, female archetypes are used to empower men. My quantitative analysis revealed that female portrayals in articles which were not specifically written for women were dominated by “victim” whereas, across all “From Our Sisters” and “For Women” articles, “victim” was the second least prevalent archetype. IS thus leverages this gendered “victim” portrayal more prolifically in messaging targeted towards male audiences so as to empower men and motivate them to action, by demonstrating that they hold powerful roles where they can fulfil their moral and religious obligation of waging jihad to protect women and save the Ummah.

Thirdly, female archetypes are leveraged to shame men as a means of inciting action. Although the latest Inside the Khilafah video is the first explicit depiction of women fighting, IS has not refrained from praising “blessed” female combatants and uses the “fighter” archetype as a symbol to shame men. For example, Issue 13 of Dabiq heralds the female San Bernardino shooter, Tashfeen Malik:

“…how much more deserving of Allah’s blessings are a husband and wife who march out together to fight the crusaders in defense of the Khilfah! And the brother’s blessed wife accompanied him despite the fact that combat is not even obligatory upon her, but she did not want to lose the opportunity for shahadah at a time when many ‘men’ of the Ummah have turned away from the obligation of jihad.”

Lastly, the seventh Inside the Khilafah video and findings by Winter and Margolin indicate that the use of female archetypes changes dependent on politico-military and socio-historical context. While the “fighter” archetype was almost non-existent throughout Dabiq, its prominence increased throughout IS messaging over the last year, coinciding with devastating politico-military and territorial losses. This reflects findings by Hamoon Khelghat-Doost, who argues that the strategic logic of women in jihadi organisations depends on whether the group is operation-based or state-building. While IS held territory as a Caliphate, women were strategically valuable to address the needs of a functioning state including establishing its socio-political agenda, gaining legitimacy and, according to Bloom, creating anchors to prevent male fighter defection. Now IS has reverted back to guerrilla tactics, the strategic logic of women inevitably evolves with IS’s changing strategic intent and operations. Indeed, as Aymenn Jawad al-Tamimi argues, “ISIS and its predecessors have always considered a combat role for women to be undesirable but permissible when necessary.”

Even if women are not permitted to fight in reality, analysts can agree upon the strategic significance of depicting female combatants. Given the strict patriarchal roles stipulated by IS in its propaganda, gender is instrumental in upholding IS’s identity as a polity, preserving its alternative social agenda and in individuals’ search for a secure identity. Of course, the explicit portrayal of women fighting is significant in that it further empowers women by broadening their encouraged roles within IS. However, gender dichotomies are still upheld and are in fact accentuated. While IS uses this video to demonstrate that sacrifice and hardship are inherent to a divinely orchestrated struggle endured by both men and women towards victory, depicting women in combat not only symbolises the benchmark of sacrifice but it is also a recruitment tool to motivate men to answer calls to jihad and liberate women from combat. Gender tropes are indeed potent throughout and IS continues to inspire men to answer its calls: “Labbayk (we are coming), O my mother! Labbayk, O my sister! Labbayk, O pure and chaste woman! By Allah, our lives will not be pleasant, our eyes will not find comfort, and our swords will not be sheathed until we take revenge for your honour and dignity.”

IS’s use of gender in its information operations must not be overlooked. As Haroro Ingram and Craig Whiteside argue, IS’s “Inside the Khilfah” video series illustrates how IS’s “propaganda machine intends to light the path out of its present bust, maximise the movement’s chances of survival and, ultimately, lay the foundations for another boom.” Throughout Dabiq and Rumiyah, women are portrayed as integral to “boom” periods. Now, they continue to be depicted equally as indispensable as men for IS and the Ummah to rise out of the current “bust.” Analysts should be careful not to be blinded by the peculiarity of female combatants featured in the seventh video. Indeed, an important lesson can be learned: the potency of IS’s propaganda and its ability to mobilise and incite action from a male and female audience lies in its manipulation of constructed models of gender.

Kiriloi M. Ingram is a PhD candidate at the University of Queensland’s School of Political Science and International Studies.

The NRA’s Video Channel is a Hotbed of Online Hostility