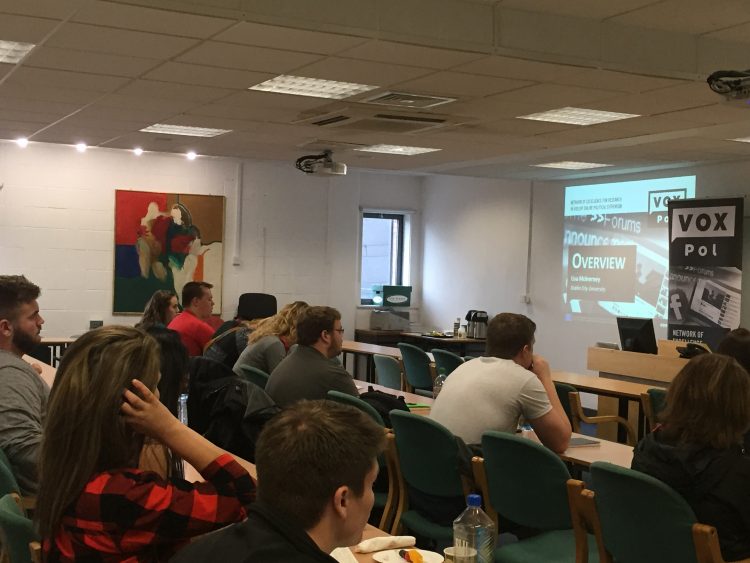 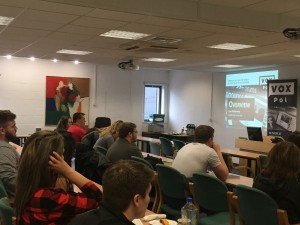 VOX-Pol Project Manager Ms. Lisa McInerney introduced the students to VOX-Pol, providing them with an overview of the Network’s objectives, activities, and research outputs. She spoke to them too about the use of the Internet by terrorists and other violent radical groups. McInerney, whose research interests include security challenges in Northern Ireland, also discussed with the students the legacy of the Provisional IRA’s struggle for a united Ireland and its implications for peace in Northern Ireland.

In addition to Dublin, the US students’ visit to Ireland included trips to historical sites in Northern Ireland, including various locations in Belfast and Derry; they also met some local political leaders with experience of ‘The Troubles.’

This is the second external student visit to DCU facilitated by VOX-Pol. In April a group of 12 students undertaking their MA in E-Law at the University of Tilburg in The Netherlands visited to hear VOX-Pol’s Coordinator, Dr. Maura Conway, speak on the role of the Internet in crowd-sourcing violent jihad and engage in follow-up discussion.

Both events for visiting students were also attended by interested DCU students.

Does the Internet Play a Significant Role in Contemporary Violent Extremism and Terrorism? Some Arguments For and Against