The shocking mass-shooting in Christchurch on 15 March was notable for using livestreaming video technology to broadcast horrific first-person footage of the shooting on social media. The perpetrator of this week’s attack on a California synagogue also allegedly planned to livestream the latter, except this did not materialise

The use of social media technology and livestreaming marked the Christchurch attack as different from many other terrorist incidents. It is a form of violent “performance crime”. That is, the video streaming is a central component of the violence itself, it’s not somehow incidental to the crime, or a disgusting trophy for the perpetrator to re-watch later.

In the past, terrorism functioned according to what has been called the “theatre of terror”, which required the media to report on the spectacle of violence created by the group. Nowadays, it’s much easier for someone to both create the spectacle of horrific violence and distribute it widely by themselves.

In an era of social media, which is driven in large part by spectacle, we all have a role to play in ensuring that terrorists aren’t rewarded for their crimes with our clicks.

Performance crime is about notoriety

There is a tragic and recent history of performance crime videos that use livestreaming and social media video services as part of their tactics.

In 2017, for example, the sickening murder video of an elderly man in Ohio was uploaded to Facebook, and the torture of a man with disabilities in Chicago was livestreamed. In 2015, the murder of two journalists was simultaneously broadcast on-air, and livestreamed.

American journalist Gideon Lichfield wrote of the 2015 incident, that the killer:

didn’t just want to commit murder – he wanted the reward of attention, for having done it.

Performance crimes can be distinguished from the way traditional terror attacks and propaganda work, such as the hyper-violent videos spread by ISIS in 2014.

Typical propaganda media that feature violence use a dramatic spectacle to raise attention and communicate the group’s message. But the perpetrators of performance crimes often don’t have a clear ideological message to convey.

Steve Stephens, for example, linked his murder of a random elderly victim to retribution for his own failed relationship. He shot the stranger point-blank on video. Vester Flanagan’s appalling murder of two journalists seems to have been motivated by his anger at being fired from the same network.

The Christchurch attack was a brutal, planned mass murder of Muslims in New Zealand, but we don’t yet know whether it was about communicating the ideology of a specific group.

Even though it’s easy to identify explicit references to white supremacist ideas, the document is also strewn with confusing and inexplicable internet meme references and red herrings. These could be regarded as trolling attempts to bait the public into interrogating his claims, and magnifying the attention paid to the perpetrator and his gruesome killings.

How we should respond

While many questions remain about the attack itself, we need to consider how best to respond to performance crime videos. Since 2012, many academics and journalists have argued that media coverage of mass violence should be limited to prevent the reward of attention from potentially driving further attacks.

That debate has continued following the tragic events in New Zealand. Journalism lecturer Glynn Greensmith argued that our responsibility may well be to limit the distribution of the Christchurch shooting video and manifesto as much as possible.

It seems that, in this case, social media and news platforms have been more mindful about removing the footage, and refusing to rebroadcast it. The video was taken down within 20 minutes by Facebook, which saidthat in the first 24 hours it removed 1.5 million videos of the attack globally.

Telecommunication service Vodafone moved quickly to block New Zealand users from access to sites that would be likely to distribute the video. 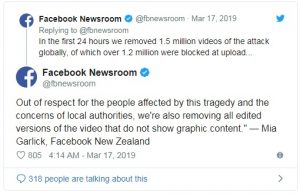 The video has been declared objectionable material, according to New Zealand’s Department of Internal Affairs, which means it is illegal to possess. Many are calling on the public not to share it online.

Simply watching the video can cause trauma

Yet the video still exists, dispersed throughout the internet. It may be removed from official sites, but its online presence is maintained via re-uploads and file-sharing sites. Screenshots of the videos, which frequently appear in news reports, also inherit symbolic and traumatic significance when they serve as visual reminders of the distressing event.

Watching images like these has the potential to provoke vicarious trauma in viewers. Studies since the September 11 attacks suggest that “distant trauma” can be linked to multiple viewings of distressing media images.

While the savage violence of the event is distressing in its own right, this additional potential to traumatise people who simply watch the video is something that also plays into the aims of those committing performance crimes in the name of terror.

According to British criminologist Majid Yar, the new media environment has created different genres of performance crime. The performances have increased in intensity, and criminality – from so-called “happy slapping” videos circulated among adolescents, to violent sexual assault videos. The recent attack is a terrifying continuation of this trend, which is predicated on a kind of exhibitionism and desire to be identified as the performer of the violence.

Researcher Jane O’Dea, who has studied the role played by the media environment in school shootings, claims that we exist in:

Perpetrators of performance crime are inspired by the attention that will inevitably result from the online archive they create leading up to, and during, the event.

We all have a role to play

I have previously argued that this media environment seems to produce violent acts that otherwise may not have occurred. Of course, I don’t mean that the perpetrators are not responsible or accountable for their actions. Rather, performance crime represents a different type of activity specific to the technology and social phenomenon of social media – the accidental dark side of livestreaming services.

Would the alleged perpetrator of this terrorist act in Christchurch still have committed it without the capacity to livestream? We don’t know.

But as Majid Yar suggests, rather than concerning ourselves with old arguments about whether media violence can cause criminal behaviour, we should focus on how the techniques and reward systems we use to represent ourselves to online audiences are in fact a central component of these attacks.

We may hope that social media companies will get better at filtering out violent content, but until they do we should reflect on our own behaviour online. As we like and share content of all kinds on social platforms, let’s consider how our activities could contribute to an overall spectacle society that inspires future perpetrator-produced videos of performance crime – and act accordingly.

This article was originally published on theconversation.com. Republished here with permission from the author.

Who Supports Dissident Irish Republicanism? A  Snapshot of Sympathisers on Facebook in 2015