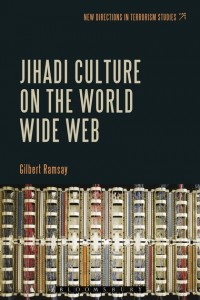 In Jihadi Culture on the World Wide Web, Gilbert Ramsay challenges existing assumptions about the phenomenon of ‘online jihadism’. He argues that a clear distinction be drawn between the offline and online activities of al-Qaida’s supporters. Consumption of ‘jihadi’ content online is not necessarily a step towards engagement in real-world violence, but a cultural phenomenon worth studying in its own right. Drawing from a wealth of original Arabic-language primary sources, his book makes a novel and highly valuable contribution to the debates surrounding violent radicalization online.

The book starts out with a simple, yet intriguing puzzle: Rather than asking why a few online jihadis eventually turn to violence, Ramsay asks why there are thousands who do not. The answer, he argues, can be found by seeing online jihadism as a subculture with its own practices, rewards, and self-justifications. His book is about describing and explaining this intricate, multi-layered, and at times quite paradoxical culture. It is an ambitious project, but the author demonstrates an impressive ability to navigate the vast empirical terrain of the ‘jihadi web’, providing quotes and examples that not only make for compelling arguments, but for entertaining reading as well.

In the first of several empirical chapters, the author discusses the nature of ‘jihadi’ content on the web. He explores a range of media formats such as jihadi poems, videos, and web pages, but also lesser-known formats such as bitaqat (a stand-alone graphic design used as forum signature) and flash animations. He demonstrates how the ideological fault lines of the jihadi movement – in particular, ‘nationalist’ versus ‘Salafi’ strands of jihadism – are reflected in various forms of online content. However, he argues that ideological boundaries are blurred when it comes to the actual process of production and consumption of such content online – for example, by the offering of typical ‘nationalist’ and ‘Salafi’ bitaqat on the same web page, or the use of ‘nationalist’ hymns as the soundtrack of al-Qaida videos. This suggests that there must be processes other than ideology explaining how jihadi content is produced and consumed online.

Chapters 4 and 5 describe the activities of online jihadis. Debunking some common myths about jihadi discussion forums, Ramsay observes that the forums are neither very vibrant, nor do they play a vital role in the war strategy of jihadi groups. The last point is well illustrated by a quote from al-Qaida ideologue Adam Gadahn, who at one point criticized the forums for being too radical and “repulsive to most of the Muslims” (p.90). On the other hand, the forums cannot be reduced to mere distribution platforms for jihadi propaganda. As shown by Ramsay’s detailed analysis, the forums function as online communities that create a powerful sense of belonging for those who participate in them. Chapter 5 goes on to illustrate how some of these participants see it as their mission to distribute jihadi content on mainstream Arabic web forums. Here, the author points out some of the fundamental problems associated with so-called ‘counter-narrative’ initiatives. The topic is obviously too vast to be treated in detail, but Ramsay’s discussion gives useful input for further study.

Ramsay also does an excellent job de-mystifying jihadi discussion forums by picking examples that are “ordinary, mundane, routine or even seemingly peripheral,” as he promises to do at the outset of the study (p.2). His examples illustrate that jihadis online are deeply engaged in a range of activities that have little do with real-world violence (such as ‘art competitions’), while at the same time seeing themselves as a meaningful part of a global jihadi project. This is the central paradox of the jihadi forums – how can someone recognize the duty of militant jihad, yet fail to engage in real-world violence? Chapter 6 goes on to present an argument about how online jihadism ‘works’, making such paradoxes possible. The author identifies three types of jihadi online practice which he labels ‘preparation,’ ‘propaganda,’ and ‘solidarity’ (p.150).

The two first categories can be seen as instrumental in nature. Those who see their online activity as “preparation” tend to have a fatalistic view – that jihad will happen when God wills it and, in the meantime, the best one can do is to prepare oneself spiritually and physically. Those who see their online activity as serving a “propaganda” purpose believe they are an integral part of a physical jihad fought on the ground, based on the notion of total warfare. The third category, in contrast, is the most inward-looking of the three. Seeing online practice as an act of “solidarity,” these jihadis believe that the mere declaration of one’s commitment to jihad is valuable in its own right. In this context, even ‘art competitions’ can be seen as a meaningful contribution to jihad even though they serve no apparent instrumental purpose. However, Ramsay emphasizes that within all of the three categories, jihadis engage emotionally with online content – an indication that the forums have something to offer besides the notion of being instrumentally effective. This ongoing discussion brings him to the main conclusion that online jihadism can be thought of as “an internet subculture in which action is motivated in an immediate sense by the availability of its own forms of subcultural capital” and is achieved through writing, graphic design, technical services, or simply by displaying and collecting material (pp.156-157).

If there is anything to criticize in Ramsay’s study, it is to be found in Chapter 7, where the author seems to have gathered up all the topics that did not fit elsewhere in the book. In particular, Ramsay’s discussion of the anti-jihadi movement does not live up to the high standards set elsewhere. He is right about one thing: that the anti-jihadi movement, or ‘Western Islamophobia’ as he calls it, has no coherent ideology and that it would be dangerous to overstate its violent potential. It is also true that the terrorist attacks in Norway on 22 July 2011, carried out by right-wing extremist Anders Breivik, cannot be explained by ideology alone. However, the author falls into the trap of stereotyping Breivik’s ideological writings without considering the wider context of Breivik’s political project. While Breivik may not be the best editor in the world, he does arguably have a clearly formulated political agenda, namely, that of uniting Europe’s various strands of right-wing militants into one movement. His strategy, as it appears in his writings, is not to create a rigid ideology to which everyone must ascribe to become member, but rather to create a common organizational ‘culture’ based on Crusaderist mythology, coupled with real-world acts of excessive violence (p.165). While this neither explains nor justifies the 22nd July massacre, it might be a phenomenon worth studying in its own right, similar to what Ramsay is doing with the phenomenon of jihadi culture. There is even a vibrant, if small, community of Breivik supporters online, who produce their own ideological content and take part in discussions, which would make an interesting comparative case to Ramsay’s study.

Unfortunately, this point seems to be lost on the author, who instead takes an unnecessary detour by comparing jihadi and anti-jihadi ‘strategic’ writings. In one particular section, Breivik’s compendium 2083 – A European Declaration of Independence (2011) is likened to Abu Mus’ab al-Suri’s The Global Islamic Resistance Call (2004). My criticism is not so much that he is comparing apples and oranges, but that there is no apparent purpose to the comparison except, as the author states, to encourage us to “treat jihadi ideological work less reverentially with regards to its supposed ideological and strategic coherence” (p.172). But if the main point was to bring jihadi ‘strategic studies’ down to earth, it would be sufficient, and far more convincing, to analyze the literature itself and point out its idiosyncrasies – rather than venturing into an argumentation that may be interpreted as guilt by association. In any case, this does not change my conclusion that Jihadi Culture on the World Wide Web is a remarkable piece of scholarship. The above comments should not be seen as core criticisms of Ramsay’s book, but rather as suggestions for further study.

In the final chapter of Jihadi Culture, Ramsay returns to the central argument of the book, namely that jihadi forums have developed their own cultural practices, which are meaningful to those who participate in them. From this follows that the notion of ‘being a jihadi’ is not merely indicative of violent radicalization – it can be a state in its own right, which may be prolonged indefinitely. The key takeaway from all of this is that online jihadism may in fact prevent real-world violence, because it creates an opportunity to engage in meaningful activities online (p.186). It is a thought-provoking argument which deserves attention from practitioners and academics alike.

Berwick, A. (Anders Behring Breivik), 2011, 2083 – A European Declaration of Independence. Accessed at https://www.fas.org/programs/tap/_docs/2083_-_A_European_Declaration_of_Independence.pdf.

This review of ‘Jihadi Culture on the World Wide Web’ was first published on E-International Relations in June 2014. Republished with permission.

Anne Stenersen is a research fellow at the Norwegian Defence Research Establishment (FFI). She specialises in militant Islamism, in particular al-Qaida’s use of the internet and militancy in Afghanistan and Pakistan. She has an MPhil in Arabic and a PhD in history from the University of Oslo. Her recent publications include “‘Bomb-making for Beginners’: Inside an al-Qaida E-Learning course” in Perspectives on Terrorism (Vol. 7, Iss. 1, 2013), and the chapter “The Relationship between al-Qaeda and the Taliban” in Talibanistan: Negotiating the Borders Between Terror, Politics, and Religion, edited by Peter Bergen and Katherine Tiedemann (Oxford 2013).

The Online Life of a Modern Terrorist: Anders Behring Breivik’s Use of the Internet

Coming Face to Face With the New Normal in Internet Research