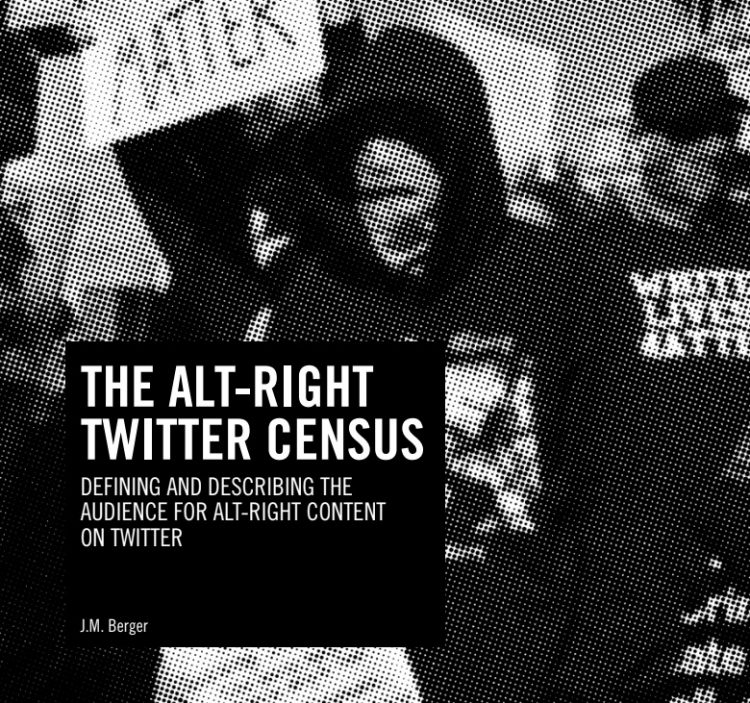 VOX-Pol has released its latest report in the VOX-Pol publication series, titled The Alt-Right Twitter Census:  Defining and Describing the Audience for Alt-Right Content on Twitter, authored by J.M. Berger, on 15 October 2018.

This report defines and describes the alt-right audience on twitter, and identifies the top ten most influential twitter accounts for the alt-right online. Since 2016, the alt-right have held a significant spot in global politics due to their continually expanding online presence. The report examines this online presence ‘with robust metrics and an analysis of content shared by adherents’, primarily on Twitter.

There were four overlapping themes apparent that dominated the alt-right network in this study:

J.M. Berger’s  prior publications include, with Jonathon Morgan, The ISIS Twitter Census (2015), with Jessica Stern, ISIS: The State of Terror (2015), and Jihad Joe: Americans Who Go to War in the Name of Islam (2011), along with numerous other reports and papers.

Previous to joining VOX-Pol, J.M. Berger was a Fellow at George Washington University’s Program on Extremism, a Non-resident Fellow with Brookings’ Project on U.S. Relations with the Islamic World, an Associate Fellow at VOX-Pol partner the International Centre for the Study of Radicalisation at King’s College London (KCL), and an Associate Fellow at the International Centre for Counter-terrorism (ICCT) — The Hague.

Berger works as a consultant, researcher and trainer on issues related to extremism and social media for clients that include Western governments and technology and security companies.

All VOX-Pol reports are open-access. This report is available for download HERE. If you would like to receive a hard copy of the report, please email info@voxpol.eu with your request.