Over the past few years, a number of concerns have been raised about both the nature of the Internet’s relationship with terrorism and the threat posed by lone-actor terrorists. Despite these growing concerns, both literatures have lacked an empirical focus. The tendency to focus upon theory-building and illustrative examples means that we lack an understanding of how generalizable aspects of both concerns tend to be. Instead what we are left with is a series of disjointed anecdotes (some rigorously researched, others not), with very little attempt at testing explanations or predictions or replicating previous case studies. As an increasing number of studies argue that the so-called rise of lone actor terrorism is linked to the Internet (Feldman, 2013), it is important to take a closer look at what role it actually plays, if any. 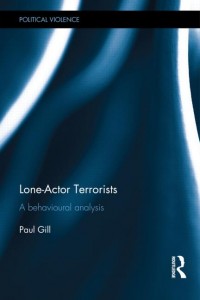 While the sample is defined by the fact that they ‘acted’ alone, there is a lot of evidence to suggest that many of these lone-actors interact with co-ideologues during their radicalization and/or attack-planning process. Just less than half (47.9%) interacted face-to-face with members of a wider network of political activists, and 35.3% did so virtually.

While there is an implicit tendency within the literature that dichotomizes offenders into those who interact virtually from those who interact face-to-face with co-ideologues, our data suggests that once an offender does one type of interaction, he/she is significantly more likely to also do the other. Not only are those who interact virtually more likely to interact face-to-face with co-ideologues, they are also more likely to make verbal statements about their intent to engage in terrorist activity (and sometimes divulge details of the actual attack). One such example, Abdulhakim Mujahid Muhammed, engaged in a drive-by shooting on soldiers at a U.S. military recruitment centre in Arkansas. He accessed various materials online and also, according to testimony delivered at a House Homeland Security Committee, was facilitated in his radicalization by other Muslims in the Nashville area.

The more pertinent question therefore may be is why individuals choose to interact virtually or physically, but rather why they choose to interact at all? The evidence suggests that much of this virtual interaction involved (a) reinforcing of prior beliefs (b) seeking legitimization for future actions (c) disseminating propaganda and providing material support for others (d) attack signalling and (e) attempting to recruit others.

We also found many forms of virtual learning that informed different stages of the attack planning and attack commissioning process. They include (a) accessing ideological content (b) opting for violence (c) choosing a target (d) preparing an attack and (e) overcoming hurdles.

We tested a wide range of socio-demographic characteristics (age, education, profession, family characteristics, relationship status etc.) and their relationship with virtual activity. A couple of characteristics remained significant across both ‘virtual learning’ and ‘virtual interaction’ variables. Younger offenders were significantly more likely to engage in both types of activities than older offenders. Presumably, the age of the offender also explains why those actors who are (a) not married or divorced and (b) currently a student, are also significantly more likely to interact virtually with others and learn virtually for their upcoming attack. This relationship between offender age and virtual activities may be explained by the fact that younger people use the Internet for a greater number of hours per day and for a wider range of tasks (Teo, Lim & Lai, 1999). This finding may therefore be explained by the simple routine activities that young people engage in. For those younger would-be lone-actor terrorists, it is perhaps natural that they would rely upon their daily routine activities to help plan their attack in the same way an active soldier may rely upon his prior knowledge, skills and awareness.

Given the relatively recent spread of the Internet, it is still too early to predict whether this relationship is actually an effect of ‘age’ that will remain constant over the next twenty years or whether in fact it is a cohort effect. If it is a cohort effect, what we are likely to see in the future is the current significant relationship between age and virtual interactions/learning dissipate as today’s younger population grow older and an infinitesimally small number develop into lone-actor terrorist offenders later in their lives.

It is also interesting to note that the non-U.S.-based sub-sample were significantly more likely to learn through virtual sources. This might be explained by the constraints imposed upon European lone-actors where firearms are far more difficult to obtain. This constraint may push some offenders into learning online about bomb making. The fact that there was no relationship between virtual interactions with co-ideologues and offender location may also attest to this explanation. In other words, U.S. based and non-U.S. based offenders were just as likely to interact virtually with co-ideologues but it was the non-U.S. based sample who were significantly more likely to study for their impending attack online.

Collectively the results provide an insight into the content and nature of virtual learning and interaction from a sample of lone-actor terrorists. The results largely downplay the threat emanating from the internet with regard to lone-actor terrorists. The rise of the internet has not led to an exponential growth in lone-actor terrorism. Those who participate in online activities, the data suggests, have also been far less successful in committing attacks and causing fatalities and injuries. The results also attest to the fact that we should take other situational and personal circumstances and experience into account when assessing an individual’s capability of engaging in a lone-actor terrorist attack. In sum, whether an individual engages in such virtual activities is often linked to either the individual’s normal daily routine activities or because something is lacking in their personal abilities or awareness space which drives the need to go online and engage. Overall, the results suggest that the nature of virtual interactions and virtual learning for lone-actor terrorists is far more complex than currently conceived.

Dr Paul Gill is a lecturer in Security and Crime Science at University College London. His research focuses on  terrorism: its causes, patterns and the actors that perpetrate terrorist attacks. Follow Dr Gill on Twitter: @paulgill_ucl

How to Beat the Media Mujahideen