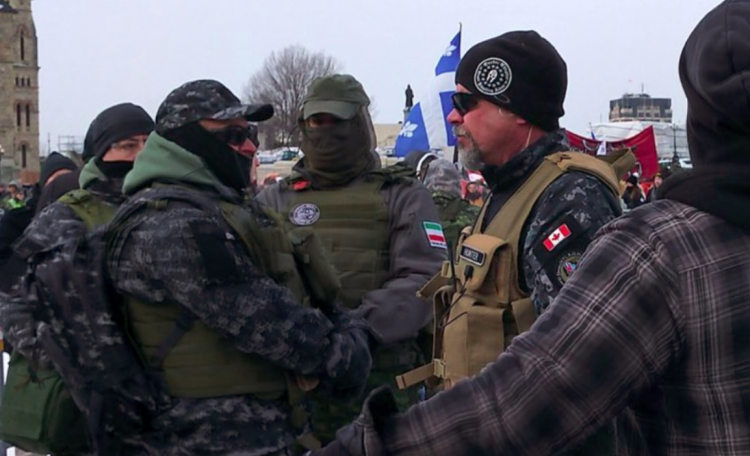 By Ryan Scrivens and Amarnath Amarasingam

Following the deadly Unite the Right rally in Charlottesville, Canadian right-wing extremist (RWE) groups tried desperately to band together, planning a number of rallies and events in some of the nation’s most urban cities to show support for the extreme right in general and to promote racist, anti-immigration sentiment in particular. These groups used an array of social media outlets, with a particular emphasis on Facebook to promote this event.

The use of this social media tool is common practice amongst RWE groups in Canada. In fact, these groups – like RWE groups around the globe – depend on Facebook to connect, recruit, and stabilize themselves as movements, as well as disseminate propaganda and plan various events and activities. Yet what we know about Canadian RWE groups on Facebook is more of a journalistic description of the movement than an academic analysis. In other words, we have little scholarship on how RWE organizations in Canada exploit Facebook and fewer efforts to methodologically and systematically analyze their online activities on a national level. There can be little doubt, then, that an assessment is needed.

In a piece that was recently published in Mark Littler and Benjamin Lee’s ‘Digital Extremisms: Readings in Violence, Radicalisation and Extremism in the Online Space’, we drew from a sample of 34 of Canada’s most prominent RWE group pages on Facebook using a mixed-methods approach to assess the popularity of the group pages, as well as the volume of content and the types of posts that generate the most user engagement.

First, we coded the group pages as either Anti-Islamic (AI) group pages or White Canadian Pride (WCP) group pages. While there is likely to be overlap in membership and/or ideological kinship between these two coded groups, the slight difference in emphasis and outlook suggested interesting avenues for analysis. Second, we provided descriptive statistics on the popularity of these pages over time, followed by an overview of the frequency with which the groups post content on Facebook and the types of posts that resonate with users. Lastly, we conducted an in-depth analysis on the group posts that generate the most “buzz” amongst users, exploring who is targeted, why the content is so popular, and how the use of violence is negotiated by the RWE groups. In what follows, we will briefly summarize some of the key findings from this exploratory study.

While there has been a lot of discussion – particularly in the media – about the steady growth of Canadian RWE groups on Facebook in recent times, our findings indicated that growth, at least when looking at the fan count of these Facebook pages, remained minimal (see Figure 1). 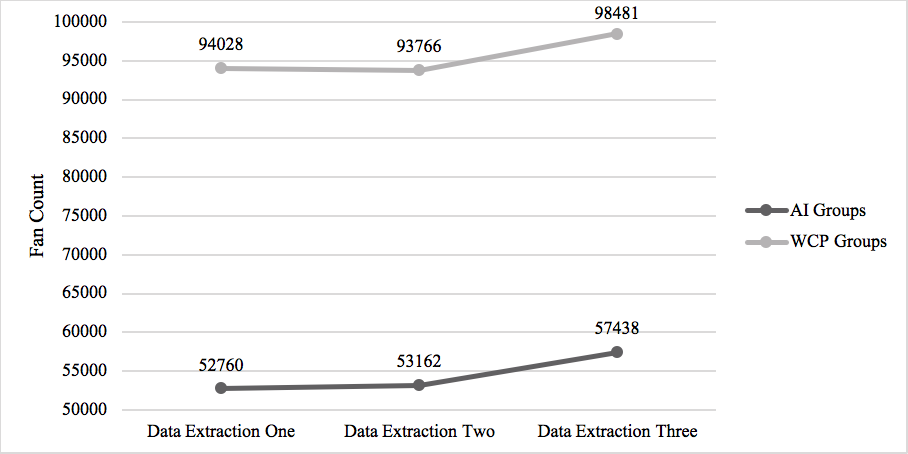 Our findings also showed that fan counts for RWE group pages, although negligible at best, decreased from time to time; there were moments when people “unliked” RWE group pages for a variety of reasons. This, however, may be symptom of the relatively short period in which the data was captured for the temporal analysis. Moving ahead, then, data should be captured over a longer period of time than what was possible for the current study, as doing so will provide a better sense of growth over time. Longer term trends, particularly seen in conjunction with world events and political developments, may also prove quite interesting.

Canadian RWE groups tended to post the highest volume of links to their Facebook pages in the sample, but this content generated very little user engagement and reaction, relative to the photo postings and videos, as is expressed in Figures 2 and 3.

An in-depth analysis of the popular content in the sample revealed that RWE groups discuss the use of force and violence on Facebook, but in doing so they describe minority groups, Muslims in particular, as the violent perpetrators and themselves as those who must defend themselves from “them”. In other words, the groups deliberately present their radical views in a subtler manner, framing themselves as victims rather than perpetrators – an othering tactic commonly used by RWEs, amongst other extremist movements.

An assessment of the popular content also revealed that, although much of the most popular content was posted by a small cluster of RWE groups (e.g., Pegida Canada) who are “established” RWE groups based on their offline activities (e.g., rallies and marches) and connections to other RWE groups in Canada and abroad, popular photos and videos were riddled with humour and sarcasm, or posts that were prepackaged as memes designed to poke fun at Prime Minister Trudeau and his policy decisions, as well as raise national and international safety concerns about Islam. This finding seems to mirror previous studies that highlight easy-to-digest captioned images and catchy videos as increasingly popular amongst a new generation of RWEs, particularly those targeting Muslims.

Worth highlighting, however, is that RWE’s use of humour in their propaganda material is not new or uniquely Canadian. In fact, an assessment of the historical publishing practices of right-wing terrorist organizations of, for example the Ku Klux Klan (KKK), reveals that the use of cartoons and humour has been a central component in their propaganda. Going forward, future studies should continue to explore why this kind of hateful content is so popular amongst adherents, as well as explore the frequency with which this content is circulating online, particularly amongst a younger generation of activists, and whether the use of humour represents the future of the RWE propaganda machine, especially on an international scale.

Ryan Scrivens is an Assistant Professor in the School of Criminal Justice at Michigan State University and a VOX-Pol Research Fellow. Follow him on Twitter: R_Scrivens

Amarnath Amarasingam is an Assistant Professor in the School of Religion at Queen’s University. He is also a Senior Research Fellow at the Institute for Strategic Dialogue and an Associate Fellow at the International Centre for the Study of Radicalisation. Follow him on Twitter: AmarAmarasingam

From the French Revolution, the First Amendment and the Third Reich to Twitter and Facebook: The Impact of Legal Histories on the Fight Against Online Extremism – Part 1: France