This article summarizes a recent study published in Terrorism and Political Violence.

Researchers, practitioners, and policymakers have paid close attention to the presence of terrorists and extremists online in recent years, with a particular emphasis on digital communities that facilitate extreme right-wing ideologies. This is largely the result of ongoing reports that some violent right-wing extremists (RWEs) and terrorists were active online prior to their attacks. It should come as little surprise, then, that researchers have focused on the presence of RWEs on various platforms, including websites and discussion forums, mainstream social media sites such as Facebook, Twitter, and YouTube, fringe platforms including 4chan and Gab, and digital applications such as TikTok and Telegram. But in light of these important contributions, an empirical study of some of the most violent RWE discussion forums has been overlooked.

This study examined pathways in posting behavior found within the open access sections of two of the most conspicuous RWE forums known for facilitating violent extremism, Iron March and Fascist Forge. The goal was to identify patterns of developmental posting behavior that could be characterized as distinct groups (or trajectories) using a criminal career paradigm and group-based trajectory modeling. We also examined whether users’ time of entry in these digital spaces predicts their posting behavior using multinomial logistic regression and analysis of variance. Several conclusions can be drawn from this study.

First, most of the authors in both discussion forums were low-onset early desisters. This is a noteworthy finding because it suggests that users who initially post in violent RWE forums generally do not increase in their posting frequency over time. Instead, at the onset of their posting careers, they post a low volume of messages and then stop posting as soon as one month after initial participation, as illustrated in Figures 1 and 2. 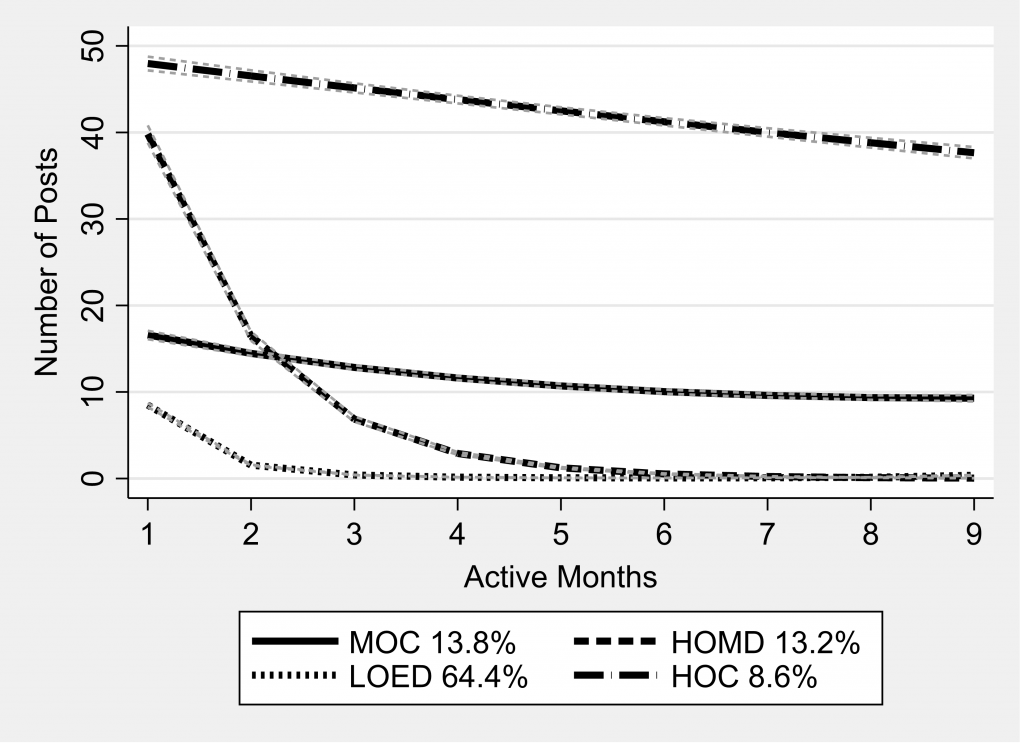 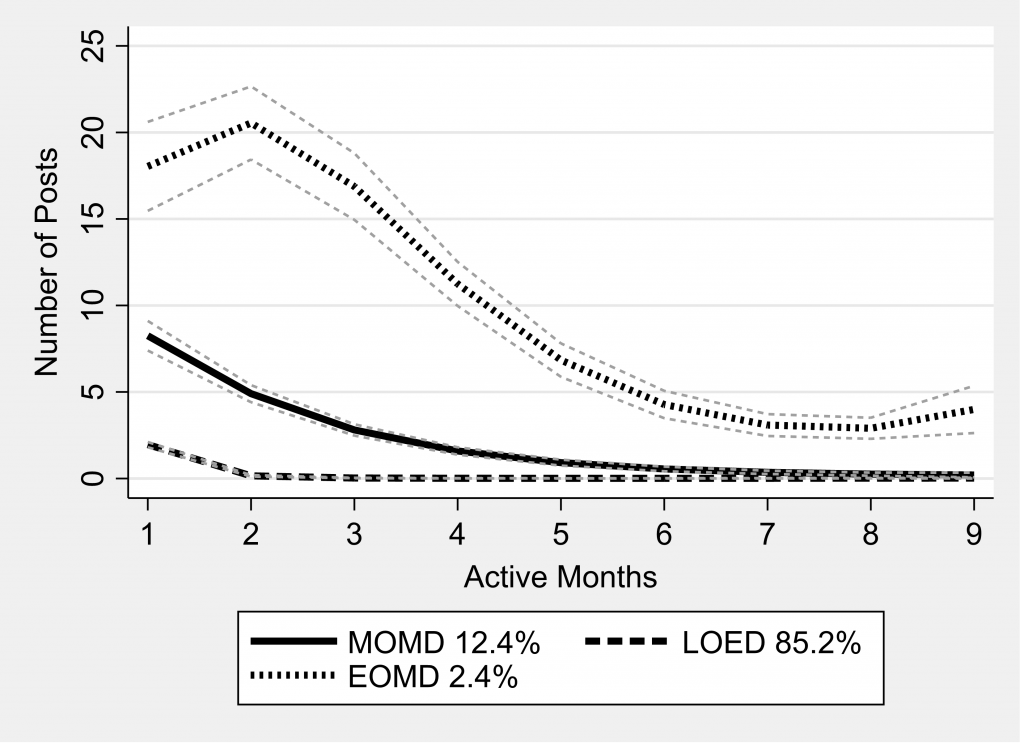 This finding aligns with empirical research suggesting that the majority of those who post in RWE forums, particularly the collective extremist forums for a general audience, tend to tail off their posting behavior. Our study findings, however, suggest that most authors in violent RWE forums desist in their posting activity at much faster rates than those in generic (or non-violent) RWE forums. Our study findings also suggest that users in violent RWE spaces generally do not become more active in the platforms over time which is in contrast to empirical research that found a steady increase in user participation in a RWE forum. However, our findings may be a symptom of the violent forums that were assessed for the current study. It is reasonable to assume that authors who posted messages in these violent open access spaces were concerned with just that: perhaps it was the violent nature of the discourse that turned users away from posting there, or perhaps they were concerned that, by posting content in such open access spaces, they would become the subject of an investigation from anti-hate watch-organizations, journalists, or even law enforcement. Furthermore, our findings may be a symptom of the nine-month posting period that was explored in the current study, unlike the previous work that explored posting behaviors over longer periods of time. Regardless, this finding requires further exploration.

Second, the Iron March forum, compared to the Fascist Forge forum, contains a higher number of posting behaviors that law enforcement and intelligence agencies may deem worthy of future investigation. To illustrate, while Fascist Forge users desisted in posting activity across all posting trajectories, two of the Iron March trajectories did not desist in activity and remained active in the violent platform – a finding supported by empirical research which suggests that those who post content in RWE forums over extensive periods of time indicates a long-term level of commitment to the online community and the extremist cause. Similarly, the proportion of users assigned to the low-onset early desister group – which is likely the least high-risk trajectory group in the sample – was substantially higher in the Fascist Forge model than in the Iron March model. And while a developmental posting behavior that was potentially threatening was identified in the Fascist Forge forum (i.e., explosive-onset moderate desister group), the most potentially high-risk developmental posting behavior in the Iron March forum (i.e., the high-onset chronic group) made up a substantially larger proportion of users in the forum than those in Fascist Forge’s most potentially high-risk trajectory group.

These findings may be a symptom of the forums that were assessed for the current study. Iron March, for example, was a relatively well-established forum that remained online for five plus years and, until the site went offline for unknown reasons, it received little attention from anti-hate watch-organizations or investigative journalists for its connection to extremist violence. Iron March also operated during a time when public scrutiny and doxing efforts (i.e., the release of information designed to expose an individual in question to public scrutiny) was little concern for those using the platform. Previous research supports this claim, in that users on Iron March did not appear to be overly concerned that their online activities, whether it was recruitment efforts or discussions about violent fascist beliefs, was subject to investigation from journalists or law enforcement. Fascist Forge, which formed in response to Iron March going offline, had a lifespan of approximately one year until it was subjected to scrutiny from journalists and anti-hate watch-organizations for its ties to violent extremists. The forum also operated during a time that those with extreme right-wing viewed were concerned that they may be doxed. Furthermore, Fascist Forge’s forum administrators vetted new users before giving them access to post on the platform and visit private channels to ensure that only the committed could participate. Posters on Fascist Forge were also subject to relatively strong content moderation on the site, which may have impacted their posting behaviors there and the results of the current study. Users on Fascist Forge, for example, may have been concerned with being banned from the platform if the content that they posted did not align with the views of those moderating the space and, in turn, their posting behaviors may have been influenced by the moderators – a concern raised by researchers exploring the impact of content moderators on RWE discussion forums. Together, it may be the case that users on Fascist Forge were cautious – and perhaps thoughtful – about the content that they posted in the open access section of the platform while users on Iron March were less fearful of the materials they posted. The more potentially high-risk posting trajectories uncovered in Iron March in comparison to those in Fascist Forge may also be explained by the fleeting and, in some ways, restrictive nature of Fascist Forge.

Lastly, early participation in both violent RWE forums was associated with longer patterns of high frequency posting behavior and chronic posting behavior. In other words, becoming an active user earlier in a forum’s lifespan is associated with greater risk of following a more chronic, potentially high-risk posting trajectory. Interestingly, it appears that these highly embedded users, who may be characterized as ‘founding fathers’ of the forums, are driving the high posting activity in each forum, while those who initially post later in a forum’s lifespan are more likely to be fleeting in their posting behavior. The developmental posting behaviors uncovered for the current study are supported by previous work that identified ‘super contributors’ in online extremist networks, or two user types – a small group of ‘super users’ and large group of ‘regular users’ – found in a RWE forum. We similarly found that the super users in Iron March and Fascist Forge posted at high rates, with these users desisting in posting activity in Fascist Forge in particular. But in contrast to previous research on the temporal evolution of users in a generic RWE forum, our ‘super users’ in Iron March did not desist in posting activity over time, which was similarly found in a recent assessment of posting activity in Iron March. Indeed, this trajectory group is worthy of future investigation by law enforcement officials and intelligence agencies.

While this study offers a first step in understanding developmental patterns of posting behavior in the Iron March and Fascist forums that law enforcement officials and intelligence agencies may consider investigating further, there remain many unanswered questions about characteristics of individual posters in these forums and how heterogeneity in these characteristics may drive differential development. Future research is also needed to assess whether developmental patterns of posting behavior are associated with perpetration of violence in the offline world. This would provide researchers, practitioners, and policymakers with new insight into the online behaviors and actions that can spill over into the offline realm.

Ryan Scrivens is an Assistant Professor in the School of Criminal Justice at Michigan State University (MSU) and a Research Fellow at VOX-Pol. Follow him on Twitter: @R_Scrivens.

Richard Frank is an Associate Professor in the School of Criminology at Simon Fraser University (SFU) and Director of the International CyberCrime Research Centre (ICCRC) at SFU. Follow the ICCRC on Twitter: @ICCRC_SFU.