The Australian Defence Force’s latest initiative in the war on the Islamic State, a Twitter account disputing “Daesh lies”, builds on lessons from the problems encountered by earlier attempts at countering IS propaganda — but nobody really knows if it will work.

The @fight_DAESH account, which became the object of unwanted attention when one of its operators contacted a Buzzfeed journalist via private message, aims to disprove incorrect claims made by IS sympathisers online.

Is it all just a show to make the government look tough? A madcap experiment bound to fail? Well, no — but there are still plenty of uncertainties surrounding such an approach.

@fight_DAESH will not enter into debate with individual IS accounts, according to Defence — an strategy undertaken by a previous iteration of the American State Department’s Think Again, Turn Away program.

The original’s argumentative approach was panned by the media. Mother Jonesreported it as an embarrassing example of the world’s most powerful government “trolling” people over the internet, while Rita Katz of the SITE Intelligence Group, which studies jihadi behaviour online, described it as giving jihadists “a stage to voice their arguments”, allowing them to reach a wider audience.

Since then the State Department has reoriented its efforts towards being more factual and testimonial, highlighting IS hypocrisy, emphasising accounts of its defectors, and documenting its losses on the battlefield, according to Rashad Hussain, the man in charge of the change.

The Australian account, which “has been developed and implemented in coordination with international partners and Australian government agencies”, appears to build on the State Department’s experience, though its approach focuses more on directly disputing incorrect claims. Stating that “Daesh has built a false narrative, partly by using false information on social media”, a Defence spokesperson told The Mandarin:

“@Fight_DAESH identifies social media posts, currently on Twitter only, by Daesh/ISIL members, supporters or affiliates that utilise disinformation to enhance the false understanding of the group’s efforts in Iraq.

“The misinformation is analysed against other open source information using available online tools to identify specific falsehoods than can be addressed and the propaganda directly refuted. An example includes misrepresenting old images or videos portrayed as current events or the selective use of information to create false perception.

“@Fight_DAESH seeks to directly discredit false information and its disseminator where it can be clearly ascertained that they are a member or active supporter of Daesh (ISIL).”

The account, as the unfortunate interview-by-DM revealed, is currently on trial to “prove viability” — processes since the Buzzfeed story have since been “reviewed”, says Defence. It continues to tweet, though at a relatively low volume. 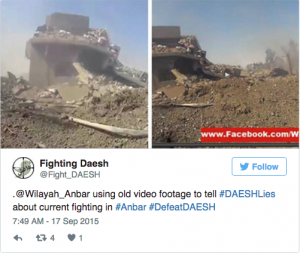 Part of, but not the whole solution

While Professor Greg Barton, of the Alfred Deakin Institute for Citizenship and Globalisation, acknowledges the potential issues with the ADF’s approach, he thinks it’s still a good, and relatively low-risk, option. “It’s not necessarily an answer in itself, but it’s part of the answer,” he told The Mandarin.

The entire field of countering violent extremism — often referred to as CVE — is still in its relative infancy, Barton said, meaning it’s not really known how well many proposed interventions will work.

No doubt it’s a cheaper and safer approach than many of the other tactics governments have at their disposal to tackle terrorism. Although it seems unlikely those susceptible to IS messaging will trust the Australian government, the hope is that it will be enough to disrupt the narratives created by the terrorist group, at very least perhaps prompting sympathisers to view IS propaganda in a more critical fashion.

Targeting facts is a very deliberate tactic. A report by Wikistrat argues that IS messaging comprises four elements: religious obligation, political grievance, a sense of adventure targeting hot-headed young men and the perception that IS is winning. While western governments will have little success in trying to address the first three, which are highly subjective, “ISIS’s claim that the group is defeating its opponents on the battlefield is not a simple matter of opinion” and is open to dispute on factual grounds. 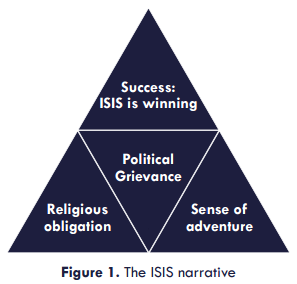 Presenting credible fact-checks on IS claims in response to events — something government agencies may struggle to do in a timely fashion — could even help minimise the occurrence of mainstream media outlets unwittingly repeating incorrect claims that play into IS propaganda designed to make the group appear strong, such as when it claimed to have seized the city of Derna in Libya (it hadn’t), or when it claimed responsibility for a terrorist attack in Tunisia carried out by an al-Qaeda affiliate.

“The basic principle is that they’ve had it to themselves for a long time with no competition,” explains Barton. “It stands to reason that at the very least we want to put some alternative views out there, so if someone is looking for this stuff there will be another view.”

Complicating matters is the fact that it’s extremely difficult to evaluate success the success of counter-propaganda. Former potential jihadists are unlikely to tell the government they had been planning to join the fight until the seeds of doubt were planted by official messaging.

“It’s not going to do everything,” Barton argues, “but it’s silly to turn around and say that because you can’t do everything you should do nothing.”

But this is only part of the solution, and indeed one of which some are sceptical.

One expert who spent five years working on CVE in the State Department’s Bureau of Counterterrorism argues that debating the facts has limited impact:

“Research has shown that when you’re trying to convince people, facts don’t matter. We seem to understand this in domestic politics, but not in CVE. … If governments and organizations are serious about countering violent extremism, they mustn’t forget the biggest reason why youth join violent extremist groups: the search for a sense of belonging, self-worth, and meaning.”

This job is made even harder if you’re a government trying to change the mind of someone who tends to disbelieve what the government says.

Instead of mounting fact-based arguments, other initiatives focus on emotions — for example, in the case of Canada’s Extreme Dialogue, by telling the stories of those impacted by extremism.

Extreme Dialogue, like some other projects, has the added advantage that it’s not a government program, though it does receive funding from the Canadian government.

Andrew Zammit, who spent several years as a researcher for the Global Terrorism Research Centre at Monash University, believes the type of emotive stategies well-suited to NGOs may have a stronger impact than government initiatives, though the two are not mutually exclusive.

“I suspect Extreme Dialogue would be more effective way of engaging with fence-sitters,” Zammit told The Mandarin.

“It’s not government-run, it involves people with direct experiences with violent extremism, and has an emotive appeal rather than simply using rational arguments.”

Barton thinks that both approaches are necessary. “A fact-based approach is best for agencies, while an emotive counter-narrative is probably best for groups in civil society. It comes down to authenticity,” he says.

For government to work with such groups, however, there needs to be a fine balancing act between remaining hands-off enough to maintain the organisation’s credibility, and the reality that such initiatives will normally need some level of government funding to remain viable.

Despite the potential issues, however, governments need to try new things to see if they stick.

“This is an inherently experimental area,” Zammit argues.

“There unfortunately isn’t as much solid research as there should be on which messaging approaches work to counter violent extremists and which don’t. So I think it’s a good thing if all sorts of approaches are tried, by lots of different entities. Hopefully that will help us to learn which approaches are more effective.”

David Donaldson is a journalist at The Mandarin based in Melbourne. He’s previously written for The Guardian and Crikey and holds a masters in international relations.

This post was first published on The Mandarin on 18 September 2015. Republished here with permission.

To Combat ISIS, Europe Must Do More to Police Social Media