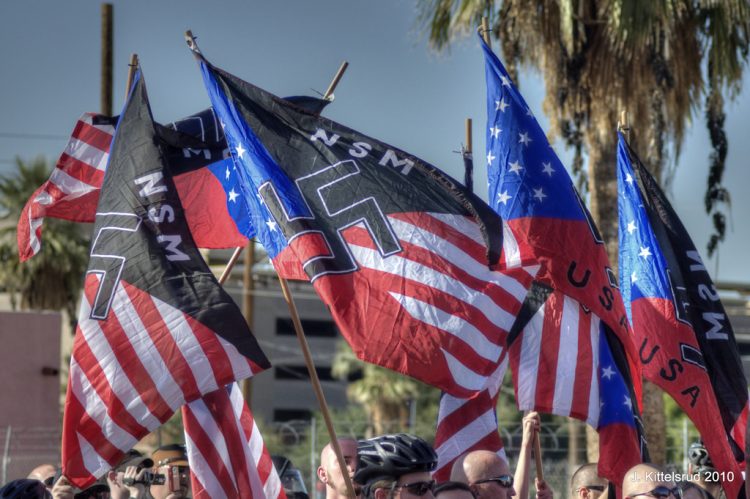 In early March, the Home Office published new counter-terrorism statistics that indicated a significant increase in the arrest of ‘white’ extremists. Tabloids in the UK, including The Daily Mail, ran triumphant headlines claiming a crackdown on far-right extremism. Unfortunately, the data released by the Home Office does not support any such assertion. The coverage of this data release overstates the degree to which far-right extremists have been affected by terrorism legislation in 2016.

The misrepresentation is based on the assumption that all white individuals arrested are ‘far-right extremists’. This assumption ignores the fact that white extremists may be involved in extremism related to Northern Ireland or in support of ‘international’ extremism (which usually refers to terrorism and extremism inspired by violent strains of Islamist ideology). However, as The Telegraph reports, there has been an increase in the number of arrests of individuals for ‘domestic’ terrorism and extremism, up from 15 in 2015 to 35 in 2016. While this is true, comparison only to 2015 misrepresents the extent to which police powers are countering far-right extremism. I explain three indicators below: arrests for ‘domestic’ extremism, disproportionality in stop-and-search, and the use of terrorism and non-terrorism legislation to address violent online hate. If we look closely at these numbers, we see that existing counter-extremist powers can do much more to deter and counter far-right extremists. 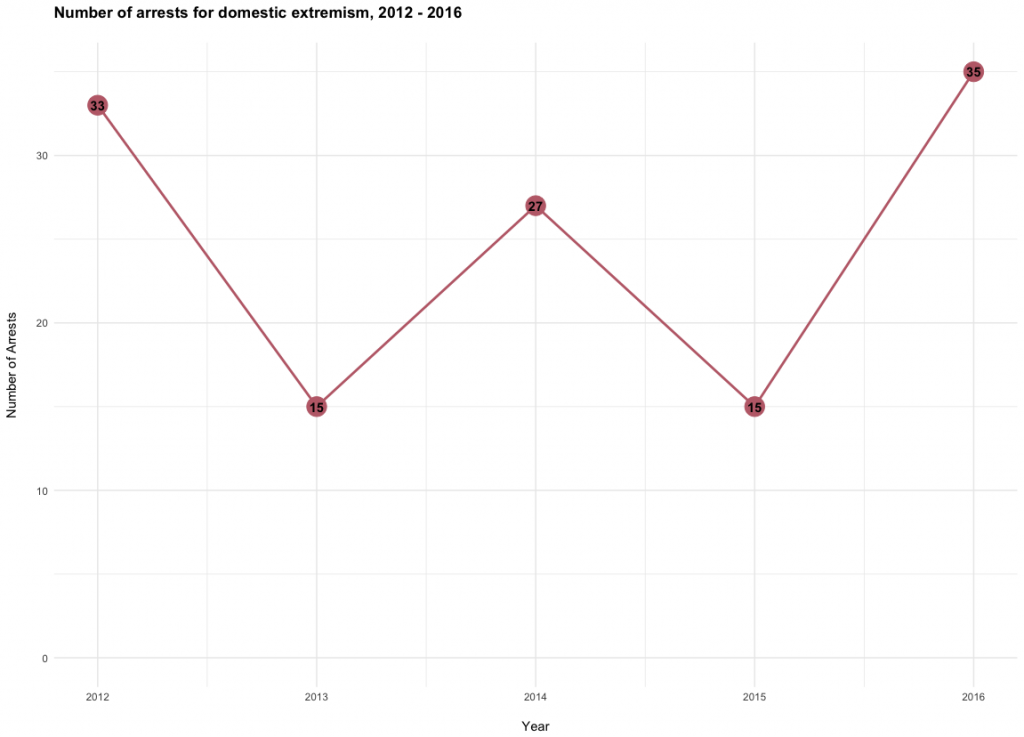 However, the most recent arrest data does not indicate that police powers are focusing more effectively on the far-right than it has in the past. In 2012, 33 individuals were arrested for ‘domestic’ extremism while 35 were arrested in 2016. It is important to take a longer view with these numbers particularly because they are so low and small fluctuations might lead to incorrect conclusions. The assertion that far-right extremism is being taken more seriously than it has been before is not supported by the arrests data over time; if anything, arrests are just marginally higher than they were in 2012, the year after the brutal massacre by terrorist Anders Breivik in Utøya, Norway.

As I have observed in a previous article, ‘soft’ counter-extremism powers, such as referrals to the Channel programme under the Prevent strategy, tend to be disproportionately used on Asian and Muslim people. This remains true for ‘harder’ police and criminal justice powers as well.

Police powers continue to be used disproportionately on non-white people. From 2011 to 2016, Asians have been on average just over 3 times as likely as a white individual to be stopped and searched in London, under Section 43 of the Terrorism Act. Since 2015, when the current Government launched its new Counter-Extremism Strategy with a renewed attention to the far-right, the disproportionality of stop-and-search powers increased. 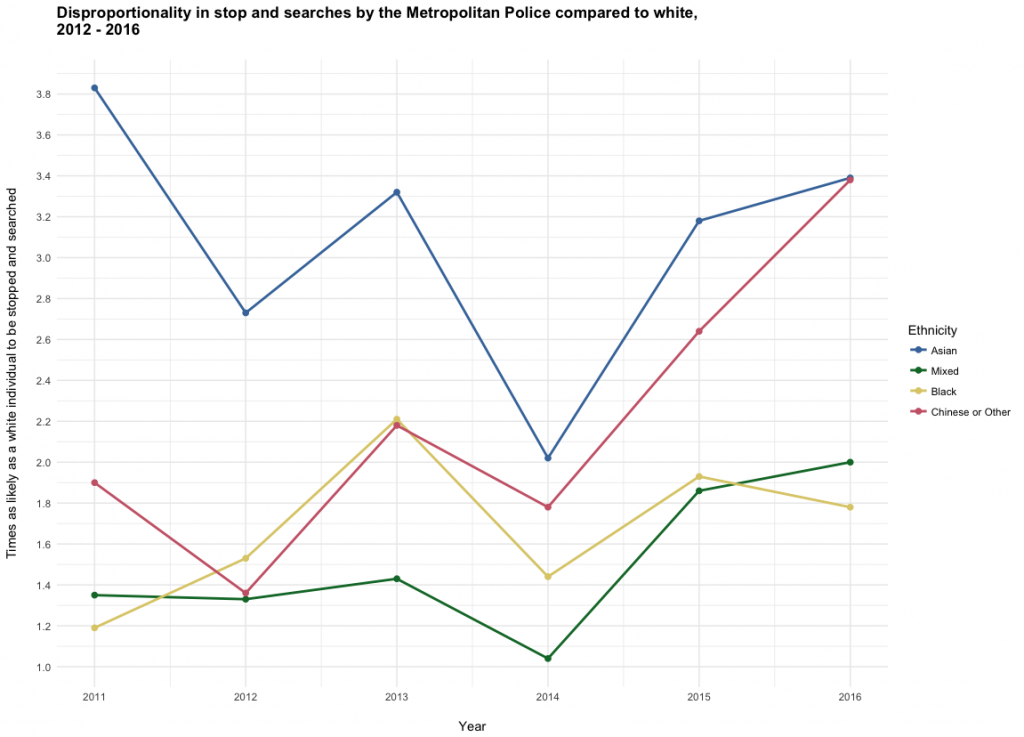 Asians were 2.0 times as likely as Whites to be stopped and searched in 2014, which increased to 3.2 times in 2015, and it stands at 3.4 times in 2016. This is in spite of the fact that the most recent data shows that Asians arrested for extremism are only slightly more likely than Whites to be charged or convicted of a terrorism-related offence. In 2016, 31% of all Whites arrested were charged, while 20% were convicted. Similarly, in 2016, 37% of Asians arrested were charged, with 23% of them convicted. With similarities in conviction rates, it is surprising that the rate at which Asians are profiled remains so high. In the last year, disproportionality in stop and search has increased, despite the increase in arrests related to ‘domestic’ extremism, the category under which far-right extremism falls.

A final indicator about how seriously the police are taking the far-right as a terrorist threat is in the number of arrests, charges, and convictions related to the use of violent speech on social media and other online platforms. Across Europe and the United States, far-right activists are adept social media users. Writing in March on the VOX-Pol blog, Paul Gill informs us that right-wing extremists are more likely to learn online, communicate with ‘co-ideologues’ online, and use the Internet to distribute propaganda than extremists inspired by ‘radical Jihad’.

Since 2011, the vast majority of those arrested for distributing terrorist propaganda have been associated with violent Islamic extremism. Section 2 of the Terrorism Act 2006, which defines the offence of disseminating terrorist publications, has been used almost exclusively on individuals expressing support for ISIS or al-Qaeda (based on my review of cases from 2011 to 2016 available from the CPS). For example, the Public Order Act 1986 and the Serious Crime Act 2007 were used to convict Martin Hartshorn in 2011 who called for ‘paki shops’ and takeaways to be burned, for conviction. The Public Order Act was also used against Joshua Bonehill-Paine, who disseminated grossly anti-Semitic propaganda and called for a ‘de-Jewification event’ that promised to be an ‘absolute gas’. The Terrorism Act 2006 was not used in securing these convictions, raising the question whether such statements can be considered terrorist propaganda.

Just as police powers are used disproportionately on ethnic minorities, it appears that far-right terrorists and extremists that are increasingly reliant on the Internet to organise and spread propaganda are not facing the full force of terrorism-related charges for their activities. Often, far-right extremist activity on social media is prosecuted as hate crime while the dissemination of propaganda for ISIS is rightly prosecuted under the Terrorism Act 2006. However, given the growing threat and dependence that far-right extremists have on the internet, it is time to reconsider whether such discourse constitutes terrorist propaganda.

Far-right extremism is a growing problem in the UK, Europe, and the United States. It is crucial that disproportionality in the use of counter-terrorism and counter-extremism powers becomes a higher priority in the future. While it is encouraging that domestic extremism arrests have increased, it is equally important to use existing terrorism legislation to deter and disrupt far-right networks.

Bharath Ganesh is a researcher at the University of Oxford. He completed his PhD in 2017, focusing on the ethics, politics, and multiculturalism in hip-hop culture. He has also worked on anti-Muslim hate and extremism studies for over four years in a professional capacity. You can follow him on Twitter: @bganesh11

How is the Islamic State dealing with its defeat in Mosul? Interview with Charlie Winter on IS Media Output