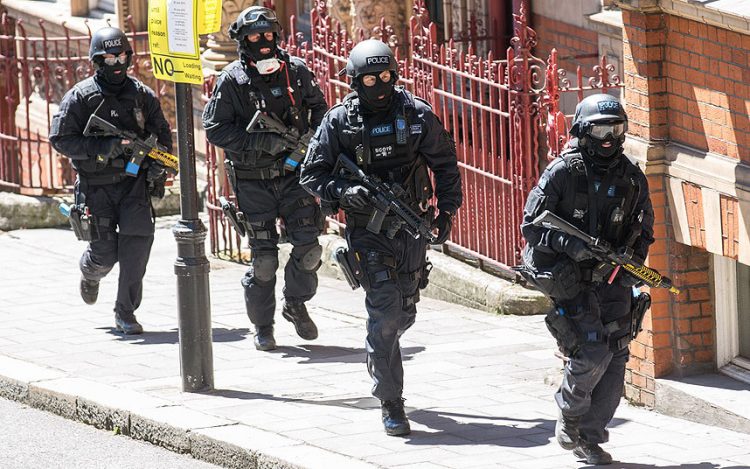 In June, the SAS and heavily armed police poured onto the streets of London. Fire brigade and paramedics appeared wearing flak jackets and explosions, sirens and automatic gunfire drowned out the sounds of the early morning commute. Men with balaclavas were seen running from building to building, and into Aldwych tube station.

It was only an exercise, of course: Operation Strong Tower. The largest ever attempted in the UK, it was designed to test the UK response to one of the worst nightmares of the British Security community. This is a ‘marauding attack’, where a small number of individuals or groups move quickly through a built-up area, attacking an area and moving on to the next before the security services can arrive. In 2008, 10 members of Lashkar-e-Taiba used this tactic to kill 164 people in Mumbai and wound at least 308 more in attacks that didn’t end for four days. Since then, the same tactic is becoming more frequent, used in Sydney, Paris and most recently Tunisia.

Operation Strong Tower was also a show of strength – a form of deterrence messaging to terrorist groups that London is not a soft target. Over 1,000 people were involved – from the military and police to ambulance, fire brigade and transport workers. Presumably spies too. The group that they didn’t – couldn’t – involve in the exercise was us, the public.

And this is important, because the role of publics in terrorist attacks is changing radically. Whether a football match, flood or train crash, every major event is accompanied by a digital response and as with any other important event, the rise of social media is turning more and more citizens from spectators – or worse, victims of a terrorist attack – into commentators about it. These bodies of reaction on social media are enormous, confusing and chaotic and at the Centre for the Analysis of Social Media, where I work, we’ve spent some time trying to untangle them. We’ve done this for floods, political debates, train crashes and terrorist attacks. It is still a work in progress, but the picture is becoming clear about how social media is used in the wake of an attack:

Official accounts will be deluged: The social media presence of any authoritative source of advice and guidance will be swamped. In the immediate aftermath of the killing of Lee Rigby in Woolwich in 2013, the Metropolitan Police’s Twitter account received over 14,000 Tweets. During a terrorist attack, many will want to know what to do, where to go, and whether where they are is safe. Others (and despite the best efforts of the Police to tell people that Twitter is not 999) will call for help.

People will try to help each other: Social media is an important new forum where people both ask others for help, but also offer it. During the Somerset floods of late 2013 and early 2014, people used social media to offer fields that weren’t flooded for animals, to form spontaneous sandbag teams, even to convene a 4×4 rescue squad to move people and animals through otherwise impassable roads. During a terrorist attack, people will also use it to offer help, advice and material support.

People will talk about what they’re seeing: Even in times of chaos and danger, people will use social media, especially Twitter, to share what they can see and hear. From the terrorist shooting in Ottawa to the Amtrak train crash in Philadelphia, eyewitnesses at the scene posted commentary, pictures and video at the scene. The same was true for Operation Strong Tower itself: And also the inevitable political reactions too: Al Jazeera wrote a piece on how Londoners used social media to document the exercise.

Social media is also part of the aftermath: The online reaction will continue far beyond the event itself. People will use social media to send condolences and messages of support. However, an inevitable part of the broad process of coming to terms with the attack will involve blame and anger. After the killing of Lee Rigby, arguments broke out online between nationalist and Islamist groups, and the English Defence League used Facebook and Twitter to quickly mobilise a march through Woolwich. Online slugging matches between opposed groups have the danger of spilling out onto the streets.

Taken as a whole, this body of digital reaction creates two new opportunities for countering terrorist attacks. The first is situational awareness. Millions of citizen commentators join established intelligence sources as a new way to learn about the attack – where it is happening, to whom, when and how. If all the images and videos, textual commentaries and reports can be marshalled and filtered, analysed and prioritised they can produce a real-time, constantly updating intelligence picture of what London’s citizen-commentators can see and hear on the ground. This is ‘social media intelligence’ – SOCMINT – and a vital new resource for keeping society safe, especially during dynamic, on-going events.

The second is community resilience: people taking steps themselves to stay safe. Government has the opportunity to reach those who are asking for help on social media, to give advice and information to help them make smarter decisions about where to go and what to do. Equally, people have the opportunity of reaching others too – of sharing possibly life-saving information, and supplying possibly life-saving aid.

None of this is easy. During a terrorist attack, social media will erupt into chaos. Rumours and half-truths will sit side-by-side with urgent calls for help and accurate, important eyewitness testimony. The overall picture on social media will be tangled and complex, difficult to verify, challenging to collect in its entirety, and it will pour onto social media streams faster than the eye can read.

Yet, whilst difficult, I do not think it is impossible. For our part at CASM, we have started to research how social media reacts during important events – the scales of data, the kinds of information that appear, and what tends to happen when. We’re also looking at how well technology can quickly turn the deluge of information into a clear, accurate picture of what is going on: using algorithms to sort and prioritise the content, to draw out emerging patterns, spot eye-witnesses, and locate clusters of corroborating information. We’re not alone, as a number of different research projects trial different approaches on this key, new, technological coalface.

We can never make London immune to terrorist attacks, but we must always work to make it more resilient to them. Technology has a central role to play in unlocking the capacity of ordinary people to both help the state respond to an attack, and also each other. And with one of the strongest, most dynamic digital and technology sectors in the world, that, at least, is a source of optimism and strength for London in an uncertain, sometimes dangerous, world.

This post was first published on Techcity UK Blog on 24 July 2015. Re-published here with permission.