by Andrew Hoskins and Ben O’Loughlin 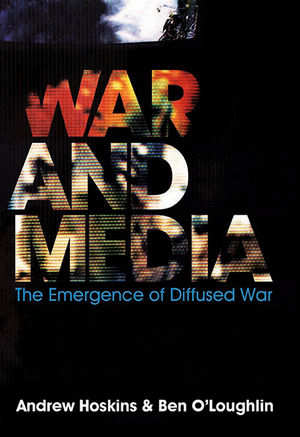 In the past two decades we have passed through three phases of media ecology, and each has shaped a different way media have entered into the operations and understandings of war and conflict. The 1990s saw the final stage of broadcast era war. National and satellite television and the press had a lock on what mass audiences witnessed, and governments could exercise relative control of journalists’ access and reporting. By the turn of the millennium, mass internet penetration and the post-9/11 war on terror signaled a second phase, that we called the emergence of Diffused War. Here, the embedding of digital enabled more of war and its consequences to be recorded, archived, searched and shared – war’s mediatization. An unprecedented sense of chaos and flux beset both those conducting war and mainstream media organisations used to having a monopoly on its reporting. Content seemed to emerge from nowhere, effects had no causes, and uncertainty reigned. This was a wild west moment in which much of the media ecology felt ‘out there’, beyond; the centre could not hold.

But today, the centre has adapted and come back stronger than ever before. The mainstream is the media ecology. User-generated content and its chaotic dynamics ‘out there’ have been absorbed and appropriated. In the 2000s Al-Qaeda established a jihadist media culture outside the mainstream, only dipping into mass television and internet spaces to deposit a video or spectacular act of violence. Today, to the extent they can stay one step ahead of the CIA and moderators, IS rely on Twitter, a mainstream US platform whose affordances IS are happy to work within. The mainstream has enveloped the extreme. It has regained its powers of gatekeeping, of verification, of defining agendas. Any content that is acclaimed as alternative, oppositional or outside, only acquires significant value when acknowledged and remediated by the mainstream. Virality and spreadability, key concepts of phase two of the ‘new media ecology’, are not part of a sustainable, user-generated phenomenon, but are ultimately arrested by the mainstream.

What we are describing is the realignment of our media ecology. The meteorite known as digital hit the media jungle around 2000, destabilizing previous patterns of interdependence between the big media beasts and us little audiences. Some of the big beasts died, but many adapted to the new environmental conditions and came to provide services that enable an even broader mass than the broadcast era. Central to this was news media. News went through a crisis in the mid-2000s. Editors knew that audiences could find compelling raw footage of war on YouTube. Reporters worried that in the competition with immediate user-generated content they would succumb to F3 – reporting that was first, fastest but flawed. High profile journalists told us they might as well now be “just another blogger”. Owners were convinced that audience fragmentation and niche filter bubbles would kill business models. A few years on, we see these actors found strategies to cope with the new conditions. Mainstream news editors are less concerned about whether they will be out of a job in a year and have returned instead to age-old dilemmas such as how much of conflict to sanitise or whether they are giving terrorists the oxygen of publicity. Mainstream news has re-asserted its centrality and it is surer of its basic functions. When we speak to journalists now, they seem more confident their news coverage offers quality and integrity.

How would we characterise media’s relationship with war now? It is not just that media has enclosed war within its infrastructure. Media arrests war. It stops war escaping – escaping unintelligibility, escaping mainstream coverage, escaping the control of military commanders. To arrest is to seize, or to stop or check. To arrest is also to attract the attention of. Those protagonists we would expect to be operating in hard-to-reach places – such as IS – seek the attention of the most open and popular channels and spaces. They are drawn to the mainstream media ecology because it has re-asserted its function as primary channel of the world’s affairs. We live, now, in a time of Arrested War. War no longer evades the eye of the primary gatekeepers. The dynamics once deemed chaotic are now harnessed.

Although this is a less stable system that in the former broadcast era, in this new normal editors, journalists, conflict protagonists and even audiences expect to be continually adapting their media practices. The role of social media in conflict or uprising is not unprecedented and hard-to-fathom; there are sufficient templates to render any Twitter campaign by Hamas or the IDF instantly intelligible. The data deluge is less threatening; for instance, on its Watching Syria’s War multimedia curation site the New York Times simply posts all the images it can verify and all the ones it can’t, and is happy to be transparent with users about what is verifiable and how hard it is for news to fully verify anything. The digital chaos, the “leakage”, is already leaked, hosted and made searchable by the newspaper of record.

Furthermore, the pervasive proclaimations of the extent and success of revolutions against oppressive regimes by so-called ‘digital activists’ as we entered this decade, using an array of social media platforms, seem overdone. The mainstream (in its democratic and undemocratic forms) has reasserted itself. The shift through the three phases of media ecologies was simply much more compressed: a sudden collapse of a repressive mainstream media by a chaotic new media environment, appropriated in turn by a slightly less repressive mainstream media.

More broadly, so-called ‘connective action’ is a misnomer, for it is truly exercised by those ‘Big Media’ agents with the greatest connectivity: Reuters, the BBC, CNN and so on.

The three phases of war and media generate a set of academic concepts to grasp how power and communication function in each. The first, broadcast phase of war and media was accompanied by analysis of agenda-setting and gatekeeping by large national news organisations, studies of news values and media logics, and the sociological study of frontline journalists. The second phase, Diffused War, saw theories of agenda-setting and gatekeeping problematised by non-linear causality and networked communication. Attention to frontline journalists was overtaken by explorations of citizen journalism, citizen witnessing and every other variation of (what we now see as just) people doing journalism. It was unclear whether news values and media logics would hold together strongly as more of life was mediatized, or whether they would explode as various new devices and communities emerged. In the Diffused War phase we saw a melting pot of new concepts as scholars tried to get a grip on apparently novel and confusing phenomena.

Although Arrested Warfare may seem like a return to an earlier phase with renewed hope in Media Studies for the exhausted trilogy of audiences, institutions and production, instead, the re-establishment of the mainstream requires a more holistic lens that picks out the emergent hybrids, fissures, and other complexities of this media ecology. Traditional phenomena such as agenda-setting and gatekeeping function through more complex practices. For instance, in 2011 we tried to grasp how, on the one hand, Al-Qaeda videos were proliferating in anarchic ways and yet, on the other, ultimately only the same few videos reached mainstream audiences. We described this as networked gatekeeping: despite the flux and increasing volume of Al Qaeda’s media productions, ultimately much of what reached Western audiences at the time was nonetheless still clearly gatekept by mainstream news editors. The latter determined what of the Arabic was translated and in doing so changed the message for their mainstream audiences.

These phases, and the concepts used within each, are overlapping. In the coming years we will still witness the non-linear agenda-setting of Diffused War, as images lost or hidden emerge unexpectedly to disrupt established narratives of past and present events. Equally, tendencies can be discerned now about what comes after Arrested War, just as how mainstream media was being ‘renewed’ and its re-assertion could be seen to be possible back in 2007 during the middle of news’ crises in Diffused War.

To reiterate, Diffused War referred to a new paradigm of war in which (i) the mediatization of war (ii) made possible more diffuse causal relations between action and effect (iii) creating greater uncertainty for policymakers in the conduct of war. Under conditions of Arrested War, however, the mainstream rather than being in competition with mediatization, instead harnesses it for its own ends. Policy-makers and militaries have renewed confidence in the mainstream’s appropriation of the current media ecology, and enter into closer relationships with it. The British mainstream media were granted more official access to UK troops in Afghanistan than any previous war in history.

Some will say there never really was a period of Diffused War or uncertainty among generals, editors and news audiences; that pro-military reporting was sustained throughout this period by mainstream press in the US and UK, for instance. This is to ignore the fact that a great deal of content did emerge in mainstream media that was intensely “unhelpful” to military protagonists or confusing to journalists and audiences.

Others will reject the idea that margins and micro-ecologies will be mainstreamed and appropriated by a larger culture. Many find political hope in an everyday, an outside, an authentic and unconnected real life; that it is in that outside that new groups and causes can form. Violent actors will equally wish to keep some acts “off the grid.”

But for us, historically, interstitial and insurgent forces have often moved to the social centre or even become the new normal, given time. What is required now is for researchers to delve into the qualitative experience of gatekeepers and insurgents to see how the cycle of margin-to-mainstream functions behind the scenes. Otherwise, it is difficult to be entirely certain whether we are witnessing now a re-assertion of mainstream news’ primacy or the re-assertion of mainstream news’ performance of primacy. We hypothesise that it is both, and it is this duality that drives the cycle.

There is nothing that can escape mainstream media now, nothing that mainstream media has not already foreseen escaping and that it has devised strategies to accommodate (the media ecology premediates itself, in Grusin’s terms). This means that there are no aspects of war and conflict that can escape the framing and analysis of mainstream media. This seems to make war more controllable by those fighting it, although not necessarily more intelligible and accessible to audiences seeking to be informed about it. But what is certain is that the mainstream has re-asserted its role and function within the latest turn of the media ecology.

Agenda: Workshop on the role of social media and internet companies in responding to violent online extremism