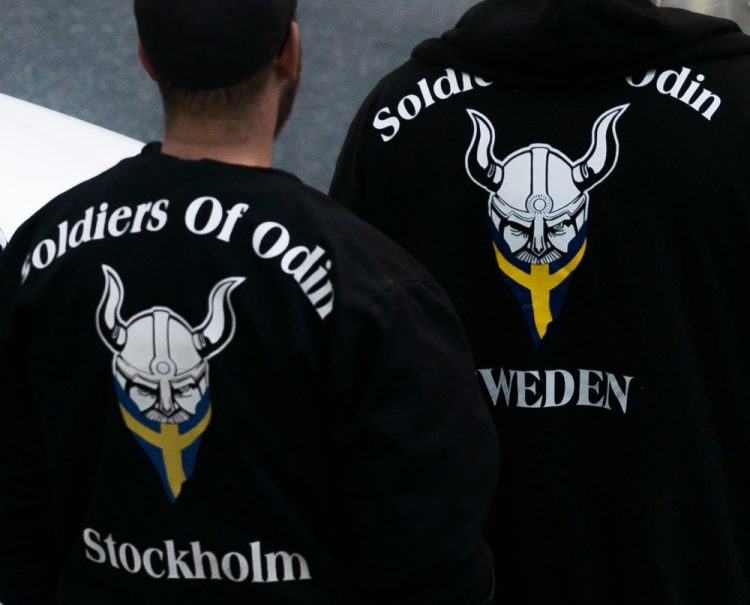 Rather than analyzing the so-called ‘Islamic States’’ use of (social) media, in this post Dr. Matti Pohjonen, VOX-Pol Research Fellow 2016, explores if parallels can be drawn between it and a topic he’s more familiar with: far right anti-Islamic hate speech.

Following the Paris, Brussels, and other attacks, newspaper commentaries have routinely warned about the polarization caused by the refugee crisis in Europe. The narrative I am interested in has thus already been well rehearsed: through terrorist attacks, IS wants European countries to turn against their Muslim populations. The far right, in turn, tries to achieve the same by exploiting the growing fears and insecurities around the refugee crisis.  What has not been yet adequately explored yet, I think, is a more conceptual look at how these two are sparking off each other. Ultimately, the question for me was whether there’s some kind of discernible relationship between these two different forms of violent online political extremism?

In this blog post therefore I reflect upon the applicability of a “mirror theory” of media analysis in this domain. Instead of viewing IS’s media strategy as somehow singular, I argue that it should be understood in relation to its mirror image: the growing anti-Islamic sentiment promoted by right-wing extremists in Europe, the US, and elsewhere.

Accusations in a Mirror

During the Rwandan genocide trials, an anonymous booklet was presented as evidence of their planned nature. The booklet, titled “Note relative à la Propagande d’Expansion et de le Recrutement,” detailed some of the propaganda techniques used to garner support for mass violence during the genocide. The booklet, among other things, described at length some of the tactics of mass manipulation that had been historically effective in igniting such mass movements. One of the key techniques suggested was called Accusation in a Mirror (AiM):

“…the basic ideas of AiM is deceptively simple. The propagandists must “impute to enemies exactly what they and their own party are planning to do.” In other words, AiM is a rhetorical practice in which one falsely accuses one’s enemies of conducting, plotting, or desiring to commit precisely the same transgressions that one plans to commit against them. For example, if one plans to kill one’s adversaries by drowning them in a particular river, then one should accuse one’s adversaries of plotting precisely the same crime.” (K. Markus, ‘Accusation in a Mirror, 2012: 359).

The theory of AiM thus suggests that, in order to be successful as a propagandist, one must accuse the enemy of conducting, plotting, or desiring to commit the same acts of transgression that one hopes to inflict against them. According to scholars of genocide, this trope has been implicated in most mass killing in the past century whereby acts of violence have been preceded by the manufacture of an imagined threat posed by the Other, against which one needs to urgently act in self-defence.

While there is of course no evidence that these sources have been consulted by the developers of IS’s own unique brand of social media propaganda, the parallels are nonetheless striking.  For instance, following the Brussels’ bombings, IS’s statement claiming responsibility said the following:

“By the grace of Allah and His gratitude alone, a security detachment from the soldiers of the Caliphate, may Allah dignify it and support it, launched to target Crusader Belgium, which did not stop targeting Islam and its people. So Allah conquered through the hands of our brothers and cast in the hearts of the Crusaders fear and terror in the very heart of their land” (as quoted in ‘ISIS Promises ‘Dark Days’ for All its Enemies’).

Moreover, when we compare this to some of its more ideological writings, the same rhetoric of conflict and threat between the “crusaders” and “infidels” is prominent. In Iss. 7 of IS’s Dabiq magazine, for instance, a feature article titled ‘Extinction of the Greyzone’ states:

“The Muslims in the West will quickly find themselves between one of two choices, they either apostatize and adopt the kufrī religion propagated by Bush, Obama, Blair, Cameron, Sarkozy, and Hollande in the name of Islam so as to live amongst the kuffār without hardship, or they perform hijrah to the Islamic State and thereby escape persecution from the crusader governments and citizens” (p.62).

Similarly, when we compare these communicative dynamics to some of the anti-Islamic hate speech promoted by the far right in Europe, we can see again such mirroring taking place. This production of fear is omnipresent in the anti-immigrant online forums I have closely followed in my research: the fear of attacks by terrorists masquerading as refugees; the fear of multiculturalism and Islam taking over Europe; the fear of refugees raping white women, etc.  The propaganda is oftentimes visual and quite graphic.

There’s something ominously similar between the propaganda aims of both IS and the European far right. Both of them try to create a sense of threat in order to gather support for their violent acts of (at least rhetorically) “self-defense” against a threat that is mirrored by their very own actions.

In Finland, for instance, these fear fantasies that are widely disseminated in online spaces have become so widespread that far-right vigilante groups have been formed to protect the streets from these “marauding and raping” refugees. One of the most infamous of these groups, of course, is the Soldiers of Odin, a group established by a truck driver in the small Northern Finnish town of Kemi, which now boasts of more than 600 members in 25 cells in more than 10 countries. 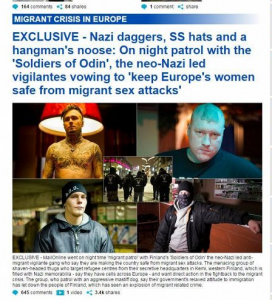 If there is indeed such mirroring at work, what role does communication play in it? One theoretical framework I have found useful comes from systems theory, and especially from the work of German sociologist Niklas Luhmann.  Luhmann argues that social systems can form mutually reinforcing relationships even if they are ostensibly not connected.  He calls these distant relationships “structural coupling.”  Bryant (2011) writes that:

“‘Structural coupling’ … refers to the way in which operationally closed systems interact with each other. Each function system is governed, according to Luhmann, by a code that governs how it relates to perturbations from its environment. Two systems are structurally coupled when they become dependent on one another for perturbations used in their own ongoing autopoiesis or operations. Like a vampire, one system draws irritations from another system so as to continue its own operations.”

In other words, if we compare the propaganda strategies of IS and the far right from this perspective, it’s possible—at least speculatively—to conceive of them as structurally coupled, that is connected insofar as both use fear and the threat of being under attack to promote division in Europe. Moreover, through attempting to produce such a climate of fear against Muslims, both of these accuse the other of the same thing they themselves want to achieve (i.e. AiM): violence towards the other group. 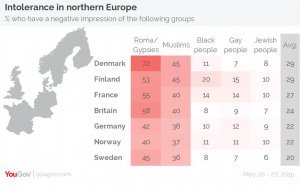 What is also interesting about Luhman’s approach to media is that he understands communication as being something quite different from the more orthodox understanding of it as the transmission of messages or meanings.  In his approach, communication has very little to do with the content or narrative—extremist or otherwise—that is produced (or even the individual social relationships behind it).  Rather, in The Reality of the Mass Media (2000), Luhman writes:

“Thanks to the mass media, then, it is also possible to judge whether it is considered acceptable or provocative to stand apart and reveal one’s own opinion. Since the mass media have generated a background reality which can be taken as a starting point, one can take off from there and create a profile for oneself by expression personal opinions, saying how one sees the future, demonstrating preferences, etc. … for the social system, memory consists in being able to take certain assumptions about reality as given and known about in every communication, without having to introduce them specially into communication and justify them” (p.65)

Communication thus creates a kind of a horizon, a social memory, through which people relate to each other, and especially to people who can be related to only via the mass media. It produces a kind of common sense world of “everybody knows” which, in a way, predates any specific acts of communication such as the targeted propaganda campaigns by IS or the far right or indeed efforts to counter them.

So why does all this theoretical speculation matter? Where I find these occasional theoretical expositions useful is that they help me frame my research questions better and recalibrate the methods used to explore them empirically.

My own work for VOX-Pol investigates different kinds of conflictual dynamics found in social media conversations around the refugee crisis, and especially how, when and where conflict mediation mechanisms such as counter-speech could be used effectively to mitigate these.

But while excellent work is being developed that takes into account more contextual factors in determining when counter-speech initiatives can have a positive resonance, it seems to me that we still need to better understand the underlying communicative dynamics through which people relate to different kinds of communication in the first place. What I am thus interested in exploring are the different ways we could research these affective predispositions, these underlying “structures of feeling” (R. Williams 1961) or “forms of life” (L. Wittgenstein 1991) that arguably pre-exist any act of communication and their violent predispositions.

Dr. Matti Pohjonen is VOX-Pol’s 2016 Research Fellow. His research focuses on different kinds of conflict mediation mechanisms through which social media communities across the world have tried to counter and mitigate hate speech and violent political extremism online. Prior to joining VOX-Pol Matti worked on a project mapping online political discussions in Ethiopia for the Programme on Comparative Media Law and Policy (PCLMP) at the University of Oxford, and was a Senior Teaching Fellow in Digital Culture at the School of Oriental and African Studies (SOAS), University of London.