In 1924, Adolf Hitler described propaganda as “a terrible weapon in the hands of an expert.” For two decades, the Nazis showed the world what a devastating weapon it could be. They won over millions of Germans to their extremist goals in a democracy by branding their movement with powerful symbols and images of their leader, engaging in niche marketing, and crafting messages that appealed to a public disheartened by the economic dislocation of the Great Depression. Nazi propagandists employed the most modern communications technology of the time–radio, film, and even television– to spread their radical ideas.

Today, ISIS draws upon many of these same sophisticated techniques to win adherents around the world. And, like the Nazi regime, it understands that terror too can be an effective form of propaganda. Hitler and his Minister of Public Enlightenment and Propaganda, Joseph Goebbels, realized that targeted violence could shape public opinion and behavior in support of the movement if it was portrayed as necessary and justifiable and the objects of the terror deemed deserving of punishment. In its provocative social media propaganda, ISIS does the same.

Take one recent example of an ISIS video that shows boys (the “lion cubs of the Caliphate”) executing captured Syrian troops in a perverse rite of passage on stage in the Roman theater in Palmyra. While much of the western media focus on the jihadist group’s brutality towards its victims, which, in turn, fuels our outrage, we miss something by focusing only on the video’s murder sequence. By isolating this footage from the rest of the film, our feelings of empathy rightly go out to the victim and our animosity is directed at the killers. We must remember that this was not the intended goal of the video or the ISIS terrorists. There is method to the seeming madness of their films: they seek to justify these killings to recruits and sympathizers and spread fear to opponents or would-be opponents.

Many of the ISIS videos follow a particular pattern; they essentially convey a twisted morality story to its audience by highlighting the commission of a crime, identification of the perpetrators, and punishment of the “guilty.” In the Palmyra video, to cite just one case, the ISIS propaganda piece opens with a verse from the Koran enjoining its members to carry out divine retribution with their own hands against Allah’s enemies, (in this instance, Assad’s troops and their allies.) The footage then visually identifies the alleged perpetrators by showing captured troops being taken to the notorious Tadmor prison in Palmyra, where political opponents of the Syrian regime were imprisoned and tortured. These “Alawites,” the narrator tells us, are “guilty of torturing Sunni citizens.” Now, we are promised, they will get a taste of their own medicine. The “lion cubs of the Caliphate” then punish the guilty in God’s name, and the prison is blown up, symbolizing the end of the Assad regime. In this narrative, the ISIS terrorists appear as liberators of oppressed Muslims everywhere.

This ISIS film uses a tried and true propaganda technique that has been employed, with varying degrees of success, by various perpetrators of mass violence. In the summer of 1941, following the German invasion of the Union of Soviet Socialist Republics, Goebbels sent teams of cameramen to film the discovery of the corpses of Ukrainians, Latvians, and others who had been tortured, mutilated, and finally murdered in prisons by the Soviet secret police prior to the arrival of the German army. In Berlin, he then used the footage to create emotionally potent newsreels for the German public and for use abroad. Goebbels, like Hitler and the other leaders, viewed the campaign against the Soviet Union as a war to destroy “Judeo-Bolshevism.” Nazi propaganda thus had to incite hatred of the Jews and emphasize a “real” Soviet threat to European society. 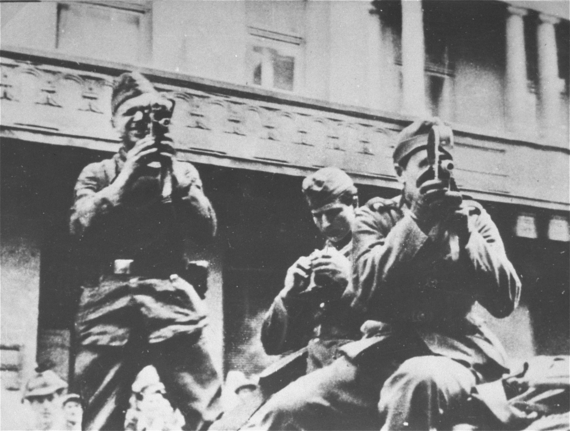 The cinematic narrative of these German newsreels took the form of a morality tale. The bodies were hauled out of the prisons, accompanied by the painful crying of the local populace; the perpetrators of the crimes were identified; and retribution dispensed. The Nazis falsely attributed the atrocities to Jews in order to whip up public support for their radical antisemitic policies. Nazi propagandists understood that psychologically, audiences, whether on the ground or in theaters, would demand immediate and swift justice for such crimes. And they were not mistaken.

After seeing these newsreels, moviegoers in Germany and Hungary demanded harsher measures against the Jews. Within weeks of this propaganda campaign, the German government ordered all Jews in the Reich to wear a yellow Star of David on their clothes and began deportations to the ghettos in occupied Poland and the Soviet Union. What audiences didn’t see were the mass shootings of Jews carried out by the SS and local collaborators in “reprisal” for Soviet atrocities.

German officials recognized that photographs and footage of Nazi-sponsored murder could be used with great effect by Allied propagandists as evidence of German war crimes. As a result, the German Army and the SS repeatedly prohibited troops from taking pictures of mass killings and executions. Existing prints and negatives were to be confiscated. German soldiers, however, continued to photograph these horrific scenes in spite of the bans and some of these images did fall into Allied hands.

ISIS propagandists have no such fears. Killings are stage-managed in front of the cameras and often shown in grisly detail to dramatize the deaths. The propaganda message is crystal clear: those being put to death are guilty of killing innocent Muslims and must be punished.

While it is difficult to gauge public opinion in the ISIS-occupied areas of Syria and Iraq, at least some of the population under its rule respond positively to that message. The cinematic brutality of these films has not dissuaded young men and women from leaving Europe and even the United States to join the terrorists.

To hard core supporters of ISIS, the video will continue to resonate since it reinforces all the themes that have garnered the terrorist organization recruits and sympathy outside of Iraq and Syria: Islam is under attack by crusaders and Jews, assisted by Muslim traitors, and that violence against Islam’s internal and external enemies is necessary and justifiable.

While the Islamic State is not Nazi Germany, there are some lessons that can be drawn from the past. Long before the United States entered the Second World War, American lawmakers, government officials, religious leaders, and journalists recognized the dangers that Nazi propaganda represented to a free society. They publicly exposed Nazi machinations in this country and elsewhere, which reduced the appeal of Berlin’s messages. But, just as importantly, the Allies created effective counter-propaganda, using radio–the Internet of its time–to broadcast around the world, including into the heart of the Reich. Counter-propaganda alone did not defeat Nazi Germany, it took the combined military and industrial might of the Allies to destroy the Third Reich.

Defeating ISIS too will require not just a military solution, but a similar multi-faceted approach that degrades its communications by diminishing the power and appeal of its propaganda to its targeted audiences.

Dr. Steven Luckert is a senior curator at the US Holocaust Memorial Museum, historian, and a Holocaust history expert

Media and Social Responsibility at a Time of Radicalisation