The event featured representatives from GIFCT founder companies, Google, Facebook, Microsoft, and Twitter, along with the EU Commission, EUROPOL, ICT4Peace, CDT, and others.

The first panel discussion and Q&A included stakeholders from agencies engaged in the fight against online terrorist propaganda.

VOX-Pol coordinator, Prof. Maura Conway, participated in the second panel discussion and Q&A, which focused on the perspective of stakeholders from academia, industry, and civil society.

Issues raised in the panel discussion included the online activity of both IS and the extreme right, content takedown and its impact on freedom of expression, and the difficulties and opportunities of engaging in research on extremism, terrorism, and the Internet. 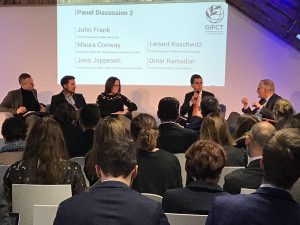 Can Taking Down Websites Really Stop Terrorists and Hate Groups?

VOX-Pol Participation in the 9th Community of Users on Safe, Secure and Resilient Societies Workshop on Radicalisation