Welcome to Volume 6 Issue 3 of the VOX-Pol Newsletter.

VOX-Pol is pleased to present a new, open-access research article by VOX-Pol Fellow Dr Zoey Reeve. The study, titled Engaging with Online Extremist Material: Experimental Evidencewas published in the journal Terrorism and Political Violence online on 24 July 2019. This research uses the novel approach of an online experiment: a fictional extremist webpage was designed and  participants chose how to engage with it. The paper shows that indoctrination, socialisation, and ideology are not necessarily required for individuals to engage attitudinally or behaviourally with extremist material.

VOX-Pol released its latest report in our publication series, titled Reconciling Impact and Ethics: An Ethnography of Research in Violent Online Political Extremism, authored by Dr Dounia Mahlouly, on 23 July 2019. The report uses empirical evidence from interviews and focus groups to highlight some of the ethical dilemmas faced by the academic community, who are tasked with developing new methodological tools and conceptual frameworks for the study of violent online political extremism. 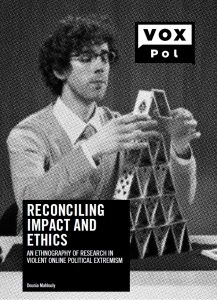 This Autumn, the VOX-Pol Network of Excellence invites you to a series of Lunchtime Briefing Seminars, each exploring a different aspect of Violent Online Political Extremism. This is the third lunch briefing series following on from events in 2015 and 2016.

The 2019 Lunch Briefing Series will take place in October and November, and is a joint venture between VOX-Pol and the European Commission Representation in Belgium. It comprises six weekly sessions in the Press Club, Brussels and will feature a presentation, a Q&A session, and a networking lunch. Keep an eye on our events page for more information and an invitation to each event. You can look forward to sessions on disinformation and deradicalisation, as well as our latest research on the Far Right in Europe.

VOX-Pol has been invited to present at the 2019 Security Research Event (SRE), which takes place in Helsinki on the 6 and 7 November. It is co-organised by the European Commission and the Ministry of the Interior in Finland as a side event of Finland’s Presidency of the Council of the European Union. The theme of this year’s SRE is ‘Towards Increased Synergies Between Different Funding Schemes and Market Uptake‘. The exhibition area will shine the spotlight on around 15 projects, displaying their inventive and ingenious results in exciting ways. VOX-Pol will have a stand featuring our publications and events, and the whole team will be present to discuss our research.

The week-long VOX-Pol Summer School was held at Dublin City University from 10 to 14 June. The Summer School gave PhD students, post-doctoral and early-career researchers an introduction to the role of the internet in contemporary violent extremism(s) and terrorism. The course

employed a mixed-methods teaching style and included lectures, discussions and small group work. Sessions were led by experts from across fields, including research, policymaking, internet industries and civil society.
The Summer School featured a visit to the Dublin Twitter Headquarters and a panel session with their cybersecurity team. Selected slides from the Summer School and a timetable are online HERE.

VOX-Pol was pleased to co-sponsor the Terrorism and Social Media International Conference, which took place at Swansea University on 25 and 26 June 2019.VOX-Pol Research Fellow J.M. Berger gave a keynote address on the first day of the conference. In addition to our Coordinator, Prof. Maura Conway, many VOX-Pol alum featured as speakers and/or co-authors at the conference. VOX-Pol were delighted to award sixteen travel bursaries for the conference, which enabled PhD students and early career researchers to attend.

VOX-Pol attended the 13th Annual International Conference of the Society for Terrorism Research, which took place at the University of Oslo on 20 and 21 June. The theme of this year’s conference was ‘The data revolution in terrorism research: implications for theory and practice’, and featured two keynotes, two roundtables and twenty-nine panels. VOX-Pol sponsored a roundtable on online data at the conference, featuring VOX-Pol Coordinator Maura Conway, VOX-Pol fellow JM Berger, Vidhya Ramalingam from Moonshot CVE, and former VOX-Pol Visiting Researcher Sam Jackson.