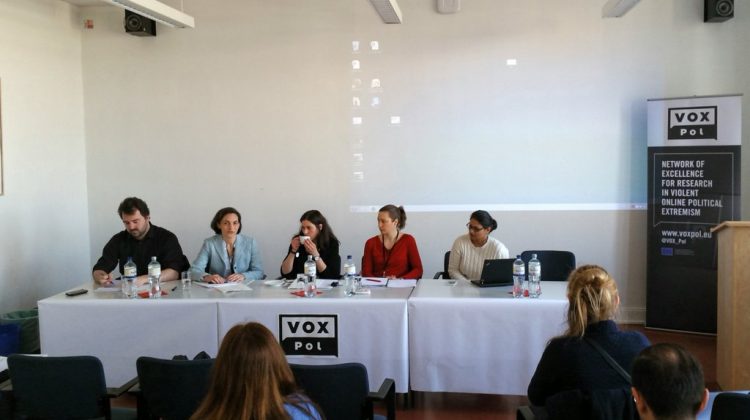 We hope to see many of you at our 22 – 24 June 2016 conference in Dublin. The draft lineup is now online HERE. Register HERE to attend.

The ‘hands-on’ workshops are as follows:

VOX-Pol’s second Summer School will take place at Central European University, Budapest, Hungary from 4-9 July 2016. The week-long summer course is designed to provide participants with an introduction to the role of the Internet in contemporary violent political extremism(s), with a special emphasis on this occasion on practices and ethics of monitoring violent extremist content; impacts on freedom of expression and privacy online; and how to research and contribute to ensuing policy debates.

Applications for the Summer School closed on 5 April 2016. We received c.100 applications for 20 – 25 places and so had to turn away many fine applicants.

The Summer School will employ a mixed-methods teaching style and including lectures, discussion, small group work, and policy labs, as well as a field trip to the Open Society Archives.

For further information on the Summer School, click HERE.

If you’re in Brussels or have colleagues located there, please note VOX-Pol will be hosting a round of Lunch Briefings during September – October  2016.

These will take place once a week over 6 weeks at lunchtime and will address hot topics in violent online political extremism research and policy.

WANT TO GET INVOLVED?

King’s College London is currently seeking a Research Associate based at the International Centre for the Study of Radicalisation and Political Violence (ICSR) to conduct research as part of ICSR’s contribution to the VOX-Pol. The purpose of the role is to conduct in-depth research into the online strategies that jihadist groups employ to recruit new members and spread propaganda, focusing on Arabic language materials.

Ideally the candidate will hold – or be close to completing – a PhD with a track-record of relevant publications, though candidates with significant research experience in this field, and with a track-record of relevant publications, will also be considered. Fluency in written and spoken Arabic and English is essential, as is the ability to work independently to a high level of accuracy and under pressure of deadlines. This is a full-time position offered on a fixed-term contract for 12 months.

The closing date for application is 23 May 2016. For more information on the application process, click HERE.

The VOX-Pol Research Fellowship Programme recruits promising researchers in the area of Violent Online Political Extremism, trains them in related research and analysis, and mentors them in delivering excellent completed projects. Applicants should have research/professional experience in either the area of the Internet or violent political extremism, but preferably both.

The Research Fellow will be hosted and mentored by one or two VOX-Pol partner institutions for twelve months in total. The Fellowship may also include a short stay at an associated end-user of VOX-Pol (details upon request). The provisional commencement date for the Fellowship is October 2016.

Suzzette Lopez Abbasciano joined Dublin City University in April 2016 as a Visiting VOX-Pol researcher for five months. She is exploring the role of social media campaigns in countering violent extremism (CVE) by building on concepts from public communication campaigns and crisis and disaster communication studies. Suzzette is a criminology doctoral student at the University of Massachusetts Lowell and researcher at the Center to Terrorism and Security Studies (CTSS).

Ryan Scrivens will be commencing a three-month Internship with VOX-Pol this summer. He will be working with machine learning specialist Prof. Pádraig Cunningham at University College Dublin (UCD), and they will be using text analysis to explore the differences between the two most visible websites in the white supremacy movement: Stormfront and The Daily Stormer. Ryan is a PhD Student in the School of Criminology at Simon Fraser University (SFU), Canada, and Researcher with the International CyberCrime Research Centre (ICCRC).

Opportunities for research visits under VOX-Pol’s Researcher Mobility Programme are open all year round. For details, visit our website and/or contact us at rmp@voxpol.eu.

On 8-9 March 2016, VOX-Pol convened a workshop on ‘Critiquing the Discourse of Violent Online Radicalisation’ at the Institute for Peace Research and Security Policy at the University of Hamburg (IFSH). The aim of the workshop was to gain insights into the main debates, issues, and challenges regarding online radicalisation. In particular, given the rather ‘mainstream’ nature of debates surrounding the topic to-date, the workshop sought to critically examine and deconstruct the discourse concerning issues such as how radicalisation actually functions online; approaches to countering this threat using so-called “counter-narratives”; as well as the political and ethical issues that come into play regarding online CVE measures such as surveillance and (internet) freedoms. The event attracted 30 participants from 11 countries and comprised academics, practitioners, and representatives from NGOs and government agencies. Participants agreed that the panels and roundtable stimulated interesting debate. The presentations from the event can be found HERE.

VOX-POL PARTICIPATION IN OTHER RECENT EVENTS

Prof. Ian Brown (Oxford Internet Institute) presented findings from his co-authored VOX-Pol report “Assessing the Ethics and Politics of Policing the Internet for Extremist Material” at an international roundtable discussion organized by the OSCE Programme Office in Astana, Kazakhstan on 29 February, 2016. The discussion brought together some 70 participants, focusing on the factors underlying violent extremism and radicalization that lead to terrorism and ways to effectively address the threat in Central Asia and beyond.

VOX-Pol colleagues also contributed to the ISA’s International Communications Section’s (ISA-ICOMM) one-day pre-convention mini-conference on ‘Communication and Peace in the 21st Century,’ which was hosted by Georgia State University’s Dept. of Communication  on 15 March. Dr. Conway is a former ISA-ICOMM Section Chair.

Dr. Alexander Meleagrou-Hitchens, Head of Research and Information at VOX-Pol partner ICSR, participated in the fourth annual Sulaimani Forum at the American University of Iraq, Sulaimani (AUIS), Iraq, which took place 16 – 17 March 2016. In this annual event hosted by the Institute of Regional and International Studies (IRIS) at AUIS, Dr. Hitchens expressed that more needs to be done on a region/country specific basis as part of the West’s de-radicalisation strategy. He added that an intervention-based programme, where people are dealt with on an individual, case-by-case basis, is the best approach.

Identifying key knowledge gaps in the area of preventing violent extremism was the main focus of a recent EU Radicalisation Awareness Network Centre of Excellence (RAN CoE) research seminar in Vienna (12-13 April 2016). Orla Lehane, from VOX-Pol coordinator institution Dublin City University, contributed to break out sessions focused on Communication and Narratives (C&N) chaired by Dr. Akil Awan (RHUL); Youth, Families and Communities (Y, F&C) chaired by Dr. Daniela Pisoiu (OIIP, IFSH, and VOX-Pol); and a session on Victims and Narratives of Victimhood, chaired by Dr. Orla Lynch (UCC).  The contributions made by Ms. Lehane were based on insights from the large number of interviews she has conducted with PVE/CVE practitioners in the EU and USA.

Dr. Matti Pohjonen, 2016 – 2017 VOX-Pol Research Fellow, presented a paper on 7 May 2016 at the ‘Conflict and Communication: Iraq and Syria’ conference hosted by the School of Oriental and African Studies (SOAS), University of London. The event was organised by SOAS’s Centre for Media Studies and the London Middle East Institute and brought together scholars from different parts of the world to debate the role of media in conflict in Syria and Iraq, in political violence and extremism, and in migration, racism and exclusionary politics in Europe and elsewhere. Dr. Pohjonen’s paper titled ‘Accusations in a Mirror: ISIS, Anti-Islamic Hate Speech, and the Refugee Crisis’ compared the social media propaganda strategies of ISIS and the European far right around the refugee crisis. He has also been asked to contribute to a conference-inspired special issue of the Middle East Journal of Culture and Communication.

A book chapter entitled ‘The Emerging Role of Social Media in the Recruitment of Foreign Fighters’ authored by VOX-Pol Academic Advisory Board member Prof. Gabriel Weimann, was published in the edited book Foreign Fighters under International Law and Beyond. This work examines how online social media platforms are being exploited by terrorists for recruitment purposes. For access, click HERE.

A forthcoming special issue of the academic journal Studies in Conflict and Terrorism features an article by VOX-Pol’s Coordinator Dr. Maura Conway (Dublin City University). The article ‘Determining the Role of the Internet in Violent Extremism and Terrorism: Six Suggestions for Progressing Research’ identifies a number of core questions regarding the interaction of violent extremism and terrorism and the Internet, particularly social media, and supplies a series of six follow-up suggestions for progressing research in this area and is available HERE.

America is ‘Dropping Cyberbombs’ – but How Do They Work?