Welcome to the second issue of the VOX-Pol Newsletter!

The VOX-Pol Network of Excellence is a European Union Framework Programme 7 funded academic research network focused on researching the prevalence, contours, functions, and impacts of Violent Online Political Extremism and responses to it.  It is a five-year programme which commenced on 1 January 2014.

We hope you enjoy reading the Newsletter and welcome any feedback you may have.

The official VOX-Pol launch Conference on ‘Violent Online Political Extremism: Setting a Research Agenda’ will be hosted by the International Centre for the Study of Radicalisation and Political Violence (ICSR) at King’s College London  on 28 – 29 August, 2014. The conference will feature 50+ papers describing and discussing cutting-edge research on violent extremism and the Internet, with a particular emphasis on violent jihadism and social media. Key note addresses will be delivered by Manuela Caiani, co-author of European and American Extreme Right Groups and the Internet (2013) and Thomas Hegghammer, Director of the Norwegian Defense Research Establishment (FFI) and author of a number of works on violent online jihadism. For more information, including the draft programme, and to register for the conference, click here.

There will be a half day ‘hands on’ workshop on research methods for scholars of violent online political extremism, held the in the afternoon of Wednesday 27 August, the day before the conference.

A workshop in the formal VOX-Pol Workshop Series will take place in Berlin in December. The workshop is a component of VOX-Pol Work Package 5, which focuses on assessing the role of the Internet in contemporary violent radicalization processes. The workshop will be concerned with the compilation, from open sources, of a comprehensive actor dictionary of individuals reported to have been violently radicalized via the Internet. Those with a research/professional interest in this topic and who may be interested in attending at the workshop should contact the convenor, Dr. Paul Gill (UCL), at paul.gill@ucl.ac.uk, for further information.

The inaugural VOX-Pol Summer School on ‘Topics in Violent Online Political Extremism’ took place in DCU from 30 June – 4 July. The week-long event drew 20 participants and 14 instructors from 10 countries, including Ireland, Germany, Hungary, the Netherlands, the UK, and the USA. Participants included MA students, PhD students, NGO representatives, and law enforcement. Sessions were delivered on the history of violent online extremism, racist and fascist groups on social media, violent online jihadism, and lone actor terrorism and the Internet, amongst others. A YouTube representative made a well-received presentation on YouTube’s Community Guidelines and decision-making, which was interspersed with spirited discussion. A guided tour of the renowned Chester Beatty Library’s ‘Art of the Book’ exhibition was also incorporated into the programme. Feedback from participants on their Summer School experience was very positive, with comments such as “Amazingly perfect. Not only perfectly organised, but very high level of quality” and “was probably one of the best organised and smoothly run events I have ever been to.”

On Thursday evening, 3 July, a Summer School-sponsored public lecture by UK-based online citizen journalist Eliot Higgins, a.k.a. Brown Moses, on ‘Social Media and Open Source Information in Conflict Zones’ drew a crowd to the Science Gallery in Dublin city centre. A video of Eliot’s presentation, which was followed by a lively Q&A, will appear on the VOX-Pol website shortly. 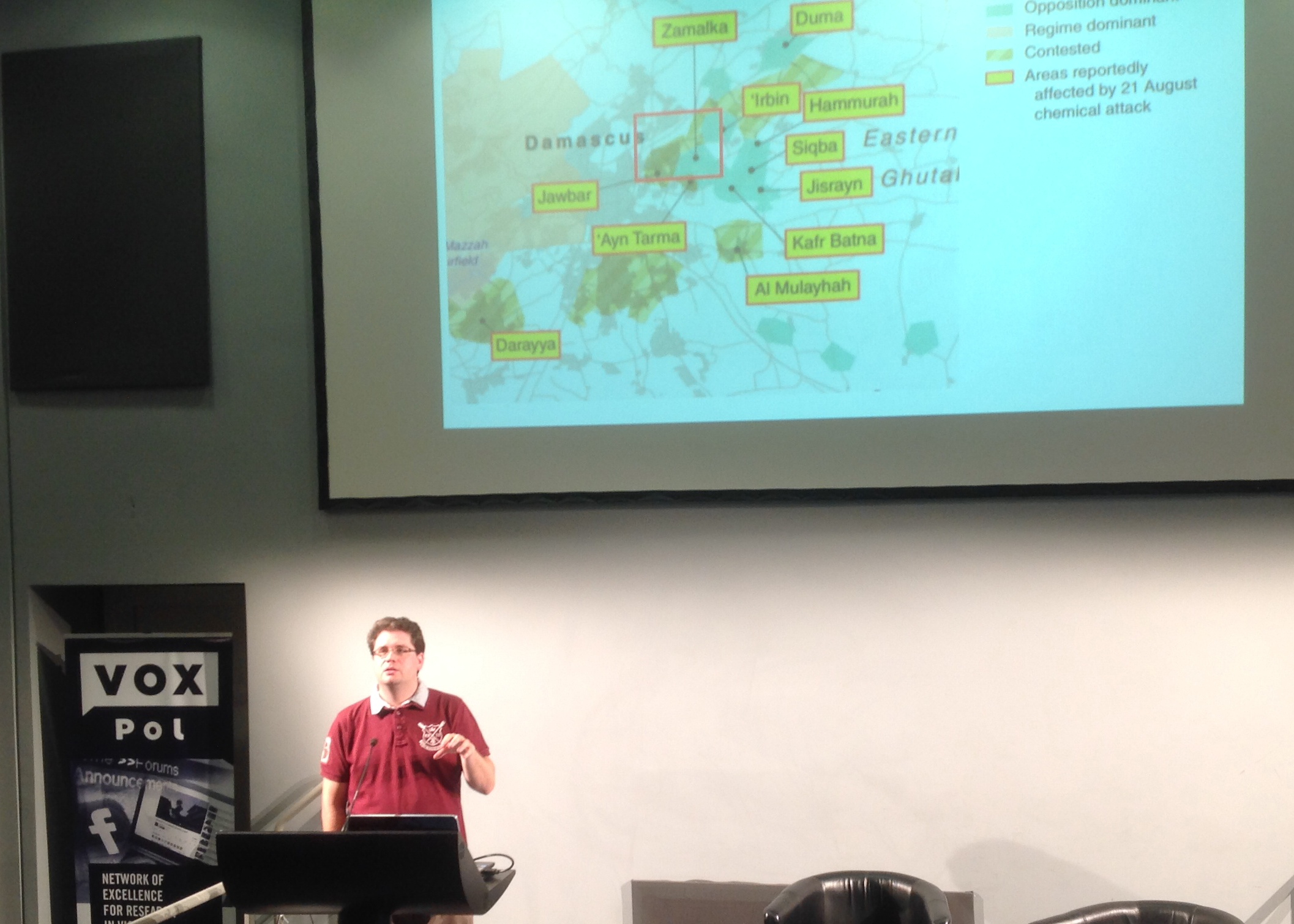 The European Commission’s Radicalisation Awareness Network (RAN) Plenary and High Level Conference took place in Brussels on 16 – 17 June. The Plenary, which was attended by VOX-Pol’s Dr. Maura Conway (DCU) and Mr. Shiraz Maher (ICSR), gathered together over 150 RAN members to discuss the Network’s achievements to-date and future trajectory. The High Level Conference, which was presided over by EU Commissioner for Home Affairs, Ms. Cecilia Malmström, included invited comments on the workings of contemporary violent online extremism by Dr. Conway, who also took the opportunity to mention the VOX-Pol network.

VOX-Pol partners from DCU, IFSH, and TNO convened for a hands-on workshop in The Hague from 16 – 18 July. The objective of the workshop, which drew together computer scientists and social scientists, was to progress work on VOX-Pol data collection and development of analysis tools.

Paul Gill’s (UCL) latest article ‘Bombing Alone: Tracing the Motivations and Antecedent Behaviors of Lone-Actor Terrorists’ (with John Horgan and Paige Deckert) in the Journal of Forensic Sciences 59(2) includes consideration of the role of the Internet and is free-to-access.

ICSR’s Shiraz Maher and Joseph Carter on the recent ISIS “Twitter Storm” for War on the Rocks blog, including some interesting infographics.

Request for contributions to online bibliography