Welcome to the first issue of the VOX-Pol Newsletter!

We are delighted to present the first issue of the VOX-Pol Newsletter which will be issued every quarter to keep you up to date with developments in and the activities of the VOX-Pol Network of Excellence (NoE).

The VOX-Pol NoE is a European Union Framework Programme 7 funded academic research network focused on researching the prevalence, contours, functions, and impacts of Violent Online Political Extremism and responses to it.  It is a five-year programme which commenced on 1 January 2014.

We hope you enjoy reading the Newsletter and welcome any feedback you may have.

Call for Papers: Deadline for submission of abstracts is 16 May 2014.

Eliot Higgins a.k.a @BrownMoses will deliver a Public Lecture!

The School of Law and Government at Dublin City University hosted, in conjunction with VOX-Pol, a roundtable discussion on ‘Terrorism in Old and New Media.’

The event, chaired by Mr. James Fitzgerald, was enjoyed by a large audience of undergraduate, MA, and PhD students, and colleagues. 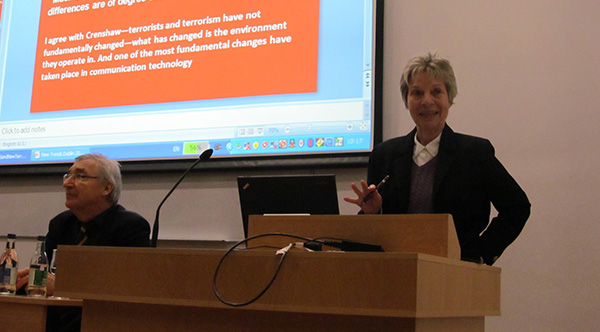 International Centre for the Study of Radicalisation

The International Centre for the Study of Radicalisation at King’s College London has just released a ground-breaking report on the use of social media by Western ‘foreign fighters’ joining jihadist groups in Syria.

The report has received widespread media coverage all over Europe and the US, including Sky News, The Guardian, and NBC News. MORE INFORMATION

TweetCred is a  Chrome browser extension that rates the credibility of tweets developed in conjunction with our partner IIIT Delhi and reported upon in The Washington Post article ‘Lies are everywhere on the Internet. But this free tool could potentially fight them‘. MORE INFORMATION