Whilst topics covered at the convention are wide-ranging, there is always a wide range of panels focused upon terrorism and political violence.

VOX-Pol researchers submitted a panel on Violent Extremism, Terrorism, and the Internet: Contemporary Issues and Cases, chaired by Dr. Anthony Lemieux of Georgia State University, and the discussant was Shaun Powers of the US Department of State.

VOX-Pol partner institution IFSH (Pisoiu and Ahmed) contributed a paper on The (Extreme) Right Online. Specifically the paper focused on analysing Twitter hashtag co-occurrence and outlinks to explore overlaps within the right-wing online scene. The slides for this presentation can be accessed here.

VOX-Pol Coordinator DCU (McInerney and Looney) contributed #twitterkurds: A Study of Kurdish Discourse on Twitter. This was an exploratory study of #twitterkurds contentaimed to ultimately map the online presence of Kurdish support for political violence, explore the online strategies of Kurdish activists, and to explore the role of women within these online networks. The slides for this presentation can be accessed here.

A second paper contributed by VOX-Pol Coordinator DCU (Conway) entitled Researching Violent Extremism, Terrorism, and the Internet; Ethics Issues which discussed the myriad of ethics issues arising for researchers exploring violent political extremism, and/or terrorism, and the Internet. The paper raises the point that the ethics issues arising from the study of violent extremism are compounded by the ever present ethics issues of online research and that this is under-discussed in current academic research.

Other contributors to the panel were Carol Winkler, et al, from Georgia State University, with a paper entitled A Multimodal Approach to Analyzing Online Messaging of Extremist Groups. A number of the authors if this paper cntributed to the most recent VOX-Pol conference in Dublin.

VOX-Pol Advisory Board member Prof. Philip Seib is a regular contributor to ISA, this year contributing papers on Public Diplomats as Change Agents in Foreign Policy: Expanding the Advisory Role, and The Future of Diplomacy: International Perspectives on the Role of Public Diplomacy. Phil also chaired a roundtable on Turkey’s Public Diplomacy in a Volatile Region.

Prof. Maura Conway contributed to the Junior Scholars Meeting organised by Ms. Leonie Tanczer of University College London. The purpose of the meeting was to lower the entry barrier to ISA and the whole academic community for PhD students and early career researchers. 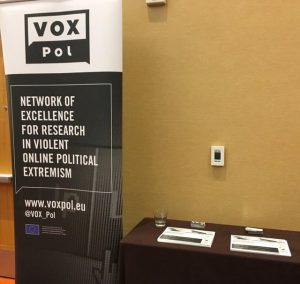 Paths to Radicalism and Extremism

Women’s Roles in Terrorism and Women Fighting Back