Some of the most powerful stories about the atrocity in recent Manchester have been told online: whether pictures of the missing, the videos taken in the aftermath or the hashtags such as #roomformanchester or #acityunited showing the city’s resilience.

But there are those who have also felt under pressure from journalists. Twitter users have detailed how they were pestered by dozens of journalists before they even knew whether their loved ones were safe. Those caught up in previous attacks shared similar stories of reporters using personal Facebook accounts to try to “friend” those involved, or even hacking into accounts.

Every news journalist in the past faced two grim rites of passage: the doorstep and the deathknock – when a reporter (often young and inexperienced) is sent round to a family home to either find a survivor, or speak to those grieving. But social media has changed all this. Journalists don’t have to physically bang on doors but can scan the profiles of those who were caught up in tragic events, and set up interviews or find “collects” (family photos) without ever having to leave a newsroom.

It’s easy to bash journalists, most of whom do think hard about how they approach people sensitively. And we have come a long way from the bad old days of reporters sneaking into hospitals and posing as doctors, as famously happened with the ‘Allo ‘Allo actor Gorden Kaye. Section 4 of the IPSO Code specifically deals with intrusion into grief and shock, as does Section 8.16 of Ofcom’s Broadcasting Code Guidance.

But these forms of guidance concentrate on interviews face-to-face or over the phone. Increasingly, however, it’s the problem of what I have dubbed the “virtual doorstep” – where those involved in traumatic events are pursued in cyberspace. The all-too-common result is that journalists can forget while dashing off 140 characters, that there is a real person caught up in a traumatic event at the other end of the internet connection. 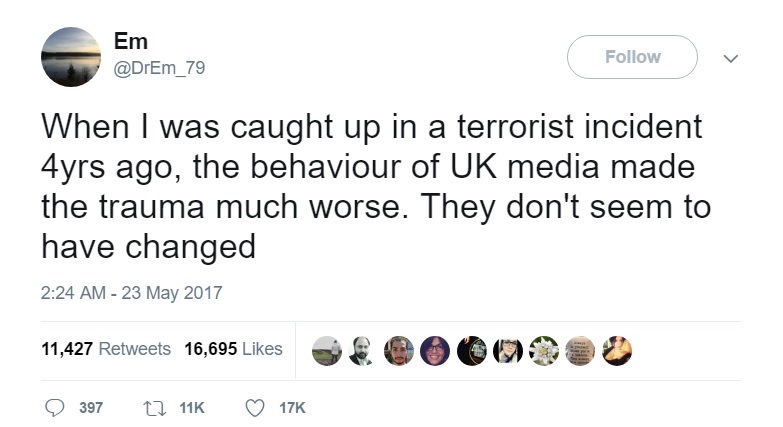 This was something that I addressed in my PhD, where I interviewed around 30 people whose images, videos and tweets had been used by media organisations during disaster situations.

The first problem was that many had their tweets or pictures reproduced by the media without any permission being asked – and suddenly found that they were being played to a much wider audience than they had ever intended. One interviewee only found out what had happened because his (previously small number of) Twitter followers suddenly started rising by 100 every hour. It’s important to note that this was not a question of doxxing (publishing personal details of someone online), or hacking, but journalists taking stuff that was put freely in the public domain (copyright however is a discussion for another piece).

For those who did get contacted by journalists, many told me they’d been pleased and even perhaps flattered by the media attention. As the researchers Sallyanne Duncan and Jackie Newton have pointed out, families can find it equally distressing if their loved ones are not memorialised in any way – as long as they have consent over the kind of material that has been used from social media.

But for others I spoke to, the situation was very stressful and the pursuit was often relentless. One told of getting “hundreds” of tweets in the space of a couple of hours and – when he did not respond to them – journalists then pursued his Twitter followers on Twitter (including his boss) to try to reach him. Many told me they found the tone used in cyberspace as “emotionless” and rude, with journalists forgetting to include social niceties such as even asking if they were OK (given these people had just survived events like an earthquake or tornado).

Some ended up deleting their Facebook or Twitter accounts; one whose content was shared widely by journalists ended up being reprimanded by his employer because his company was very media sensitive. Others found themselves being attacked by trolls who accused them of trying to make money out of other people’s misery (all those who I talked to denied any financial gain). They ended up using words such as “depressed” and “stressed” to describe themselves – and were often still upset when I contacted them months later.

It can even have more serious consequences – Marcus Hutchins, who managed to shut down the recent WannaCry malware attack on the NHS, claims that tabloid journalists pursuing him online and doxxing a friend had put his safety at risk and he was considering moving house.

Social media is an integral part of our lives now; so how can journalists use it responsibly when covering attacks like this? There is much good work around how journalists should cover tragedies like Manchester – such as the DART Center’s principles which includes an exhortation to “treat survivors humanely”.

But most ethics code still concentrate on the idea of meeting victims and survivors face-to-face. Rarely, it seems, do journalists think about what it is like for an eyewitness to be repeatedly contacted on Twitter or Facebook – or that the difference between sharing details online between friends and then finding their words splashed across a website, newspaper or broadcast can be traumatic.

Perhaps it’s time for all such codes to explicitly look at how journalists should use social media in such stories – or at least for all reporters to think: would I treat this person this way if I had to stand on their doorstep and ask the same question?

Glenda Cooper is a Lecturer in Journalism at the City, University of London. She has been a journalist at national level for more than two decades, working as a staffer at the Independent, Daily Mail, Sunday Times, Daily Telegraph and Evening Standard.

This article was originally published on TheConversation.com website on 25 May, 2017. Republished here under Creative Commons License.

Responding to Terrorists' Use of Social Media: Legislation, Investigation and Prosecution