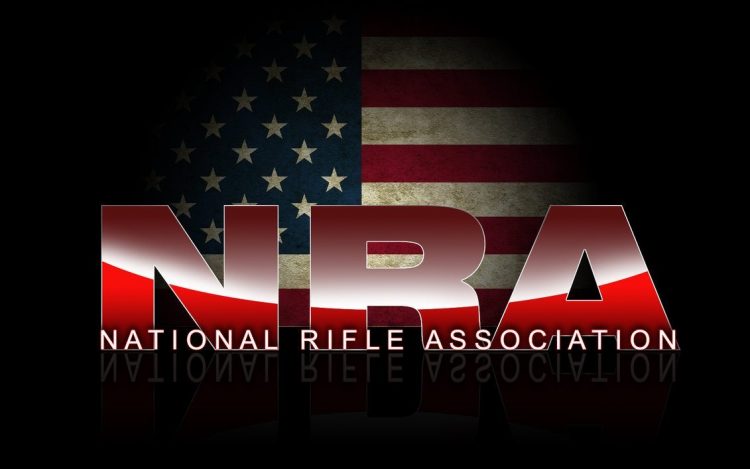 As the National Rifle Association, the most influential gun rights advocacy group in the U.S., comes under pressure from victims’ groups and gun control advocates, internet companies like Amazon, Apple and YouTube are finding themselves uncomfortably close to the center of the controversy. These are among the companies that currently stream the NRA’s official video channel, NRA TV.

NRA TV has become a central focus in what could be a threshold moment in the national gun debate. In the wake of the school shooting in Parkland, Florida, that claimed 17 lives, a consumer activist movementhas worked to peel back the tight grip the NRA holds over the country’s gun policy. The effort has driven some airlines, insurance companies, car rental companies and banks to sever their commercial and professional ties with the NRA. Now gun control activists are turning their full attention to the internet.

In the world of online politics, it’s not unusual to find videos inciting hostility. On Feb. 12, just days before the Parkland shooting, one such YouTube video featured a pundit smashing a sledgehammer through a TV set that featured liberal commentators, later declaring, “If we want to take back this nation from socialists who are out to destroy it … you better believe we’ll be pushing the truth on them.” But that video was not the seething production of an obscure far-right blogger. It was the latest episode of the official video channel of the NRA.

NRA TV is not merely a platform for promoting Second Amendment rights or engaging gun enthusiasts. As a researcher of online extremism, I’d contend it has become one of the web’s most incendiary hotspots for stoking outrage at liberal America, attacking perceived enemies like Black Lives Matter and the Women’s March, and promoting the message that America is under threat from the so-called “violent left” – an especially alarming term, coming from a gun lobby. 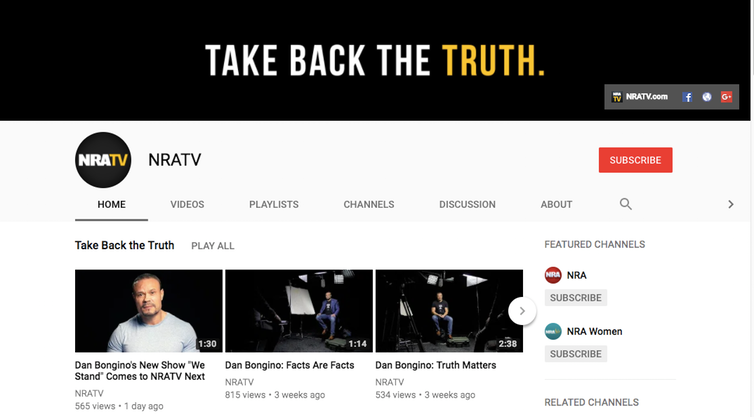 NRA TV presents itself as a part of a movement for truth and facts. Screenshot from YouTube.com, CC BY-ND

What is NRA TV?

Given the channel’s association with the NRA, a newcomer to NRA TV might reasonably expect information on gun safety, Second Amendment rights and a community for firearms enthusiasts and collectors. Its focus is none of those things. Instead, visitors find a virtual hornet’s nest of hard-right politics.

In my work, I came across NRA TV while tracking far-right and far-left groups’ activities on Twitter. One such group had retweeted a video from NRA TV featuring host Dana Loesch calling the mainstream media “the rat bastards of the earth” whom she was happy to see “curb stomped.”

The acidic tone of NRA TV represents an astonishing evolution of an organization that began as a rifle club to promote marksmanship. Even the NRA of the 1980s, which ran TV ads on the right to bear arms, would be hard to recognize as a forebear to today’s version. My study of 224 NRA TV videos and tweets over two months in 2017 found that only 34 dealt with topics related to direct gun advocacy or gun ownership. The remaining 190, or about five out of every six posts, were trained on perceived political enemies, trading the core mission of gun rights for incessant attacks on “crazed liberals” and “hateful leftists.”

It is hard to recall an NRA that once viewed itself as a bipartisan body. Its current online hosts warn that opponents of President Donald Trump will “perish in the political flames of their own fires.” Even more provocative is the portrayal of the NRA’s declared adversaries, framed not as political foes, but as ideological and even existential threats. The Women’s March is labeled “a bigoted, fake feminist, jihad-supporting” movement, while Black Lives Matter is described as “a dangerous, hateful, destructive ideology.”

The dystopian picture that NRA TV portrays includes government officials encouraging violent protests against conservative groups, and a media-sponsored “war on cops.” The NRA believes it must be ready to defend itself and the country against these and other forces. 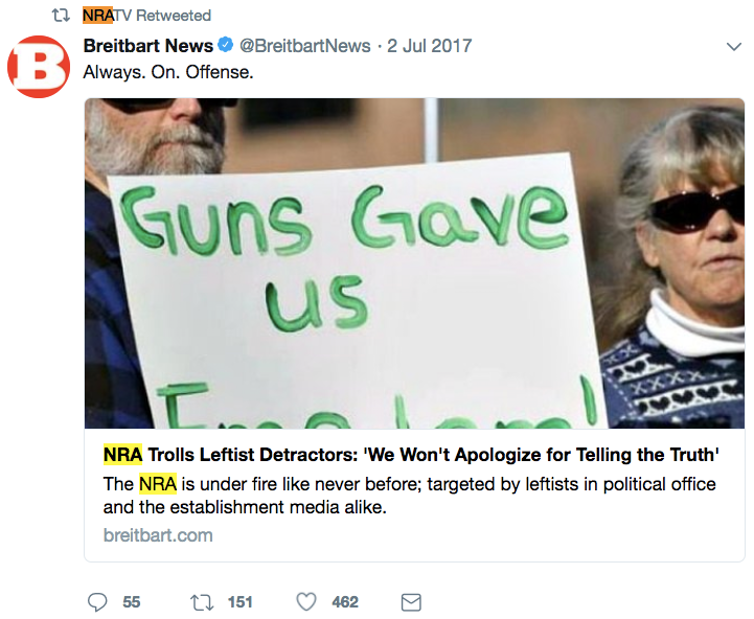 In addition to publishing its own material, NRA TV also retweets others’ hostile messages. Screenshot from Twitter.com, CC BY-ND

In a video that streamed to NRA TV’s 260,000 Twitter followers in August 2017, host Grant Stinchfield asked his audience,

“What scares me more than the North Korean crazed tyrant? The violent left and the crazed liberals who lead them. They like North Korea also pose a clear and present danger to America … Make no mistake, the lying leftist media, the elitist cringe-worthy celebrities, and the anti-American politicians – who make up the violent left – don’t just hate President Trump, they hate you.”

The insinuation that left-wing forces are out to destroy the country by sabotaging its institutions is a demagogic refrain with echoes of the anti-communist McCarthy era. But it is particularly unsettling when it emanates from a lobby that simultaneously promotes the necessity of gun ownership. Which brings us back to Amazon.

After another shooting at an American high school at the hands of a 19-year-old with an AR-15, the gun-control advocacy movement has turned its attention to its chief opponent, the NRA. The strategy is to dislodge the influence of the NRA by going after its support system. That has led activists to Amazon, Apple, Roku and other services that stream NRA TV content. While other companies support the NRA financially, these internet giants provide perhaps a more valuable currency in their prominent platforms that allow the NRA to distribute its message.

Moms Demand Action for Gun Sense in America is one organization leading the charge for internet companies to drop NRA TV, citing its “violence-inciting programming.” The group is joined by some of the survivors of the Parkland shooting, such as David Hogg, who is encouraging people to boycott tech companies that carry NRA TV. A petition on Change.org, with 240,000 signatures as of March 1, is simultaneously calling on Amazon CEO Jeff Bezos to purge NRA content from his site’s offerings. And on Twitter, #dropNRATV is gaining steam, even as the channel continues to host controversial content.

The growing wave of consumer activists has effectively placed the internet’s biggest gatekeepers in the middle of America’s hyperpolarized gun debate. As web hosts, their power to amplify or quiet controversial messages is unmatched in the modern media landscape. But in many ways, this is not strictly a gun issue. Rather, a closer look at NRA TV suggests that this is also an issue of community standards, which are well within a web host’s domain.

And in recent months, YouTube and Twitter have each demonstrated a willingness to enforce stricter terms of service prohibiting hateful, dangerous or abusive material from their networks. So the real question that these internet companies now face is whether an NRA tirade about American liberals posing a “clear and present danger” is legitimate gun advocacy, or barefaced incitement.

This article was originally posted on TheConversation.com. Reposted here with the permission from the author.