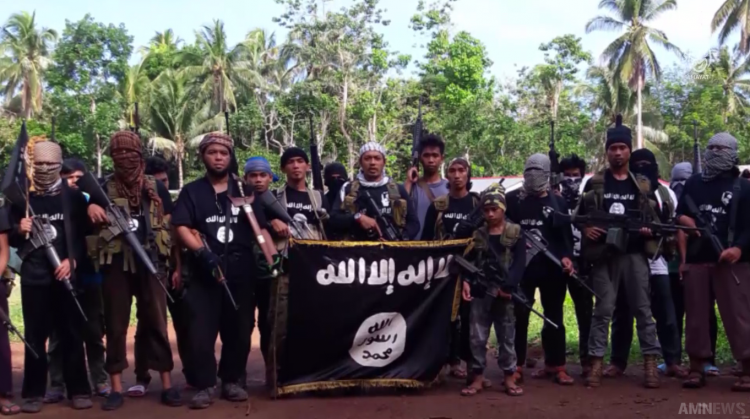 The first news that militants had taken to the streets of the Islamic City of Marawi on May 23, 2017, came from Facebook. Pictures of masked men carrying assault rifles and waving the black flag of the Islamic State were swirling across social media well before Philippine and international news channels picked up the story. By the time the military and the media had begun to respond, Marawi’s residents were already streaming out of the city by the tens of thousands to seek refuge from the violence.

While the proliferation of Facebook makes Filipinos some of the most digitally connected people in the world, the five-month battle for Marawi in 2017 laid bare a darker side of social media: its power as a tool of violent extremism. In the months leading up to the siege, there had already been speculation that extremist groups were trying to use social media to reach and recruit Muslims across Mindanao. Stories collected from schools and universities in Marawi following the siege confirm that this was the case. 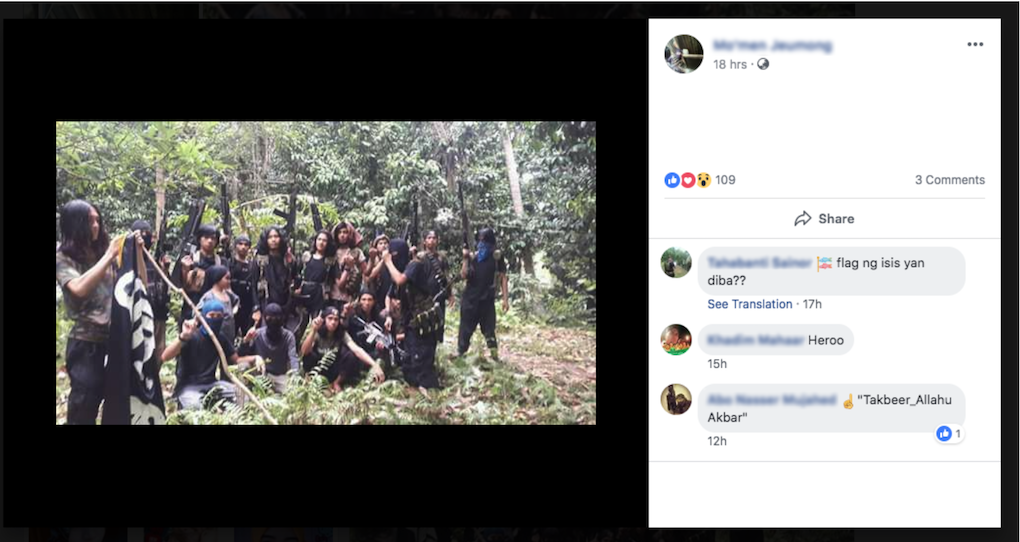 Screengrab from public Facebook profiles reveal the relatively simple and authentic method through which some users promote their violent extremist actions.

The rise of online violent extremism in the Philippines over the last few years occurred despite significant strides in the Mindanao peace process. The island region has been gripped by armed rebellions for more than four decades, caused largely by local grievances against the state. But protracted negotiations with two major rebel groups in Mindanao have produced two peace agreements, the most recent in 2014 between the Philippine government and the Moro Islamic Liberation Front. The acceptance of the Bangsamoro Organic Law in a plebiscite on January 21 is the fruit of decades of peace talks. Suicide bombings in the city of Jolo just days later by a group aligned with the Islamic State are a stark reminder that many challenges remain.

As early as 2014, after the declaration of the caliphate in Iraq and Syria, images and videos had begun appearing online showing armed groups in the Philippines pledging allegiance to ISIS. These groups reject the formally negotiated path to peace, and some of them are now engaged in online extremism to promote or defend their armed efforts in various parts of Mindanao. It was two of these groups—Abu Sayyaf, and Maute—that led the attack on Marawi in 2017 in the name of ISIS.

With online extremism and the siege of Marawi as a backdrop, The Asia Foundation, in partnership with the online media organization Rappler, set out to study the role of social media in the messaging and recruitment practices of violent extremist groups in the Philippines. The project closely engaged with young Filipinos active on social media and at risk of being exposed to extremism, to understand how they use the internet and the content they encounter online. The project studied thousands of pages, groups, and profiles on social media to analyze the methods and networks that allowed extremism to flourish online in 2018. The study’s findings were released in December in the report Understanding Violent Extremism. 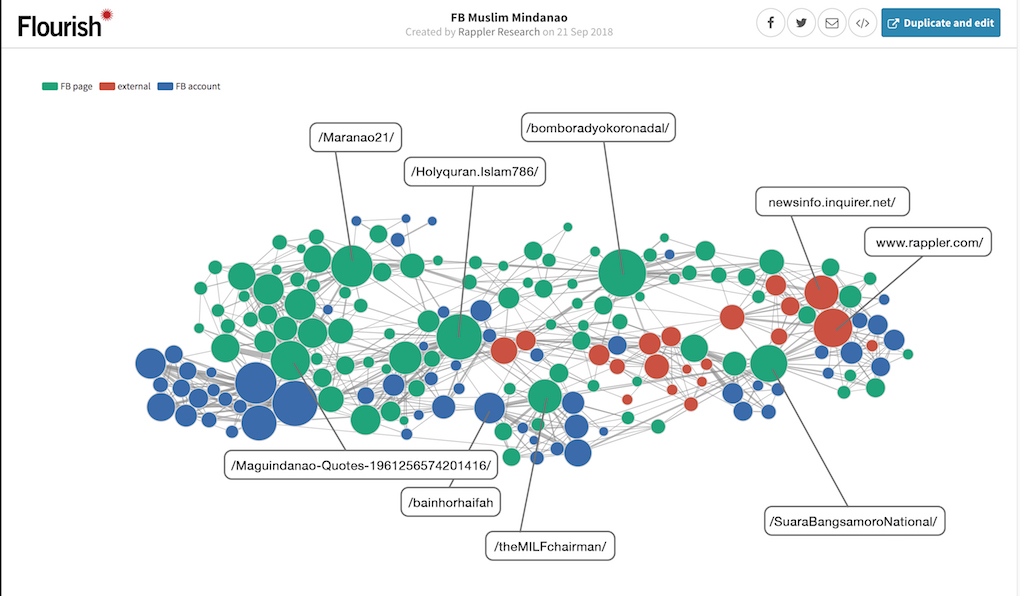 A network map of pages and groups in Facebook where researchers found conversations around hot-button issues identified by young Moro participants in this study.

Despite efforts of the Philippine government and social media companies in the wake of the Marawi siege, online violent extremist activity continues. While much of the coordinated publicity that circulated during the siege has vanished, extremists are still sharing news of their activities online and using the tools of social networking to connect with one another and with potential recruits.

Violent extremist content in the Philippines remains a serious challenge for authorities to monitor and detect. Posts are commonly in local languages that defy software translation, making them difficult to detect using off-the-shelf security tools such as content blockers and scrapers. In addition, content draws predominantly on local grievances, highlighting how both terrorist violence and the conditions that give rise to it in the Philippines are highly local and even idiosyncratic.

This local nature of content on social media confirms the organic character of online extremism in the Philippines. The violent extremists studied in the Foundation report are digital natives, but they are also digitally naïve, spreading messages in an opportunistic and unsophisticated manner that mirrors the way other digitally active youth often use social media in their day-to-day lives. Posts featuring poor-quality images of young men—often boys—posing in front of an Islamic State flag while camped in the jungle reveal how those engaged in terrorism share their lives online in a similar manner to their nonextremist peers. The content is full of the confidence and bravado that is common among teenagers and young adults on social media. 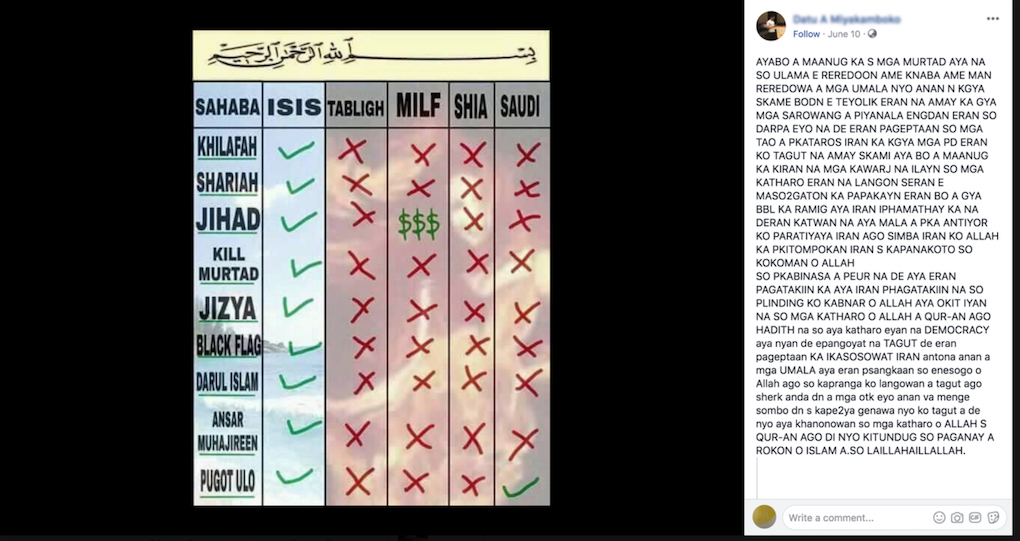 A post comparing elements within Islamic and Bangsamoro society to ISIS, claiming that the Moro Islamic Liberation Front is simply using “jihad” in the pursuit of wealth.

Efforts to radicalize others are mostly confined to private messages or debates on local-interest Facebook groups. Extremist content typically appears in the comment threads of popular or controversial posts. Where private messaging takes place, it is commonly through digital networks that replicate a person’s offline community, suggesting that the primary candidates for online radicalization and recruitment are drawn largely from a person’s friends, family, and acquaintances. There are instances where people have been contacted by strangers, but such outreach is rare, and usually occurs when the target individual has posted content that already appears sympathetic to the extremist cause.

Looking ahead, the new report suggests that the future of violent extremism on social media in the Philippines is hard to predict. The uncoordinated nature of current extremist activity on social media indicates that the immediate danger is low, but the evolution of digital security threats demonstrates that all actors must remain vigilant and engaged in monitoring developments in online activity.

One thing that’s clear is that simply removing offensive content from Facebook is ineffective. Even when the original post is deleted, extremist messages and content can continue to be shared. Meanwhile, those whose posts are censored or deleted may become isolated from more positive communities and begin to conduct their online activities in a secretive manner.

There are specific actions that government, NGOs, social media companies, and others can take to mitigate the influence of terror groups on Facebook, but taken together, the report’s findings emphasize the need for timely, targeted interventions to thwart extremist activity online. Capacity building at the community level, such as courses promoting digital literacy and critical thinking skills among young Filipinos, is one concrete activity that could effectively blunt the tactics of extremists on social media.

Online violent extremism is a global problem for governments and social media companies. What the Philippine case reveals is that within this international trend, local dynamics and social relations are the foundation of extremist messaging and recruitment. Tailored responses that address local grievances are still the best tools to limit the influence of dangerous online content.

Nathan Shea is a senior program officer in The Asia Foundation’s Conflict and Fragility Program. He can be reached at nathan.shea@asiafoundation.org.

This essay is drawn from the report Understanding Violent Extremism: Messaging and Recruitment on Social Media, written by Nathan Shea, Derkie Alfonso, Kathline Tolosa, Datumanong Ebil, Ethan Geary, and Sam Chittick with support from Rappler. It was originally published on The Asia Foundation website. Republished here with permission from the author.

Regulate Social Media? It’s a Bit More Complicated Than That