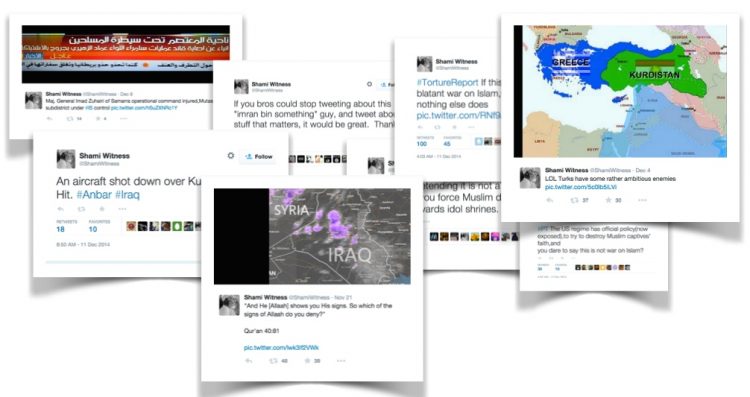 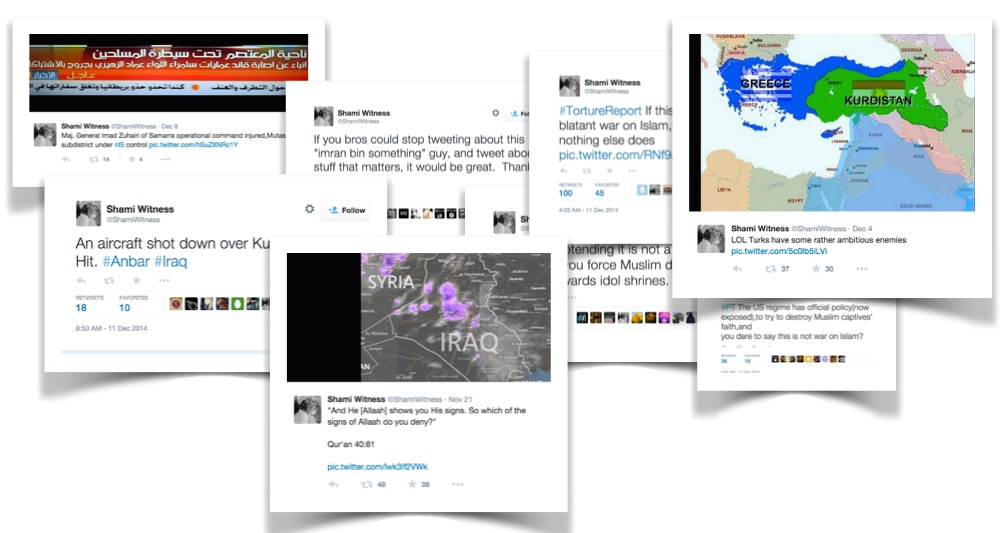 We live in an age where our political, religious, and other beliefs are being shaped by online content and interaction. Social media sites including Facebook and Twitter are powerful platforms that, amongst other things, present the opportunity for individuals to communicate radical ideas and opinions, and can therefore act as vehicles for extremism.

The war in Syria and the enduring conflict in Iraq represent the first time social media has been a fundamental source of information and inspiration for so-called ‘foreign fighters.’ Not only are these individuals using social media to collect information, but they are also documenting their active involvement in the conflict via a variety of social media platforms. These sites are thus no longer virtual, but have become valid components of the conflicts, especially for Western ‘foreign fighters.’

The exploitation of the Internet, including social media sites, by terrorists is not new. Previously, terrorist organisations, including Al Qaeda, released online propaganda through password-protected internet forums. Discussions and content circulation on these were heavily monitored however and oftentimes curtailed through membership suspensions.

The birth of Twitter considerably altered the jihadi online landscape. Today, much pertinent information, including battlefield activity, is dispensed through disseminator accounts. Links to videos, photographs, and propaganda websites are shared on this public platform. The fast-paced nature of Twitter makes it difficult for prohibited activity to be monitored to the extent necessary to stem this flow.

It is important to note that these emerging disseminators are not generally themselves ‘foreign fighters,’ nor do they generally have official links with terrorist organisations. Instead, these disseminators are self-appointed cheerleaders for IS and its perspective on the conflicts in Syria and Iraq. They support the IS cause and provide online political and moral support to actually in-country ‘foreign fighters.’

As highlighted by the International Centre for the Study of Radicalisation (ICSR) in a previous post here, there are a combination of factors that determine the popularity of these disseminators. Firstly, language skills, including fluency in Arabic, enable the disseminator to act as a translator of official accounts and content, much of which is written in Arabic. The disseminator is then acting as a bridge between Western audiences and online jihadist accounts.

Furthermore, because disseminators are not directly involved in the conflict, they are not controlled by any organisation. Also, due to many disseminators location outside of conflict zones, they have access to a wider variety of information sources, and thus may have a better understanding of the various groups fighting within Syria than those in-country whose concerns are oftentimes very localised.

Another reason for online disseminators popularity is the degree to which they interact with their followers. Not only do disseminators relay messages from official jihadi accounts, but many also actively engage with their followers. Answering questions and directly engaging with followers enhances the reputation of the disseminator and over time it can solidify an actor’s status as an accurate source of information. Eventually a trusted disseminator may become an important facilitator in the proliferation of online jihadist material.

The most influential disseminator in recent years was Shami Witness, who emerged in November 2011 during the early stages of the Syria conflict. While initially it was difficult to identify if Shami was a jihadist, troll, or analyst, he provided insightful analysis which was ahead-of-its-time. For example, he predicted the ISIL and Al Qaeda break four months before the official split. Interestingly, it was this split, which analyst  J.M Berger notes, inspired Shami to gradually adopt a more pro-IS perspective.

Prior to his arrest in December 2014, Shami had generated a support base of over 17,000 on Twitter. The variety of these followers, which included a host of respected analysts and journalists, ensured he successfully elevated himself to a position of startling prominence. Many emerging disseminators may therefore be motivated by the attention that is spawned from such profiles. This represents a worrying trend on social media, with many individuals being drawn to the role of disseminator and similar positions because of the level of influence and celebrity these profiles generate at relatively little cost. 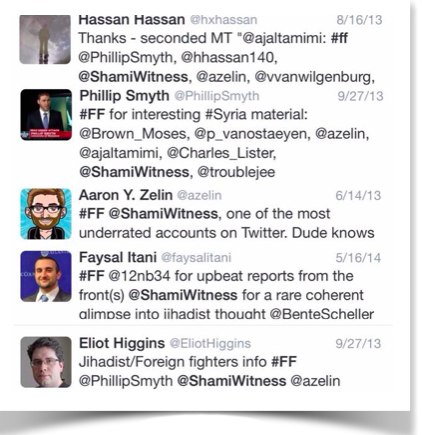 Shami Witness gained a strong following from many respected terrorism analysts, and was recommended by them as a “Follow Friday” #FF on Twitter

However, emerging disseminators will find it more difficult than Shami to exploit the structural weaknesses in how information sources are vetted online. The level of expertise on Syria and Iraq has dramatically sharpened since Shami Witness emerged in 2011, with Twitter users now much more adept at rooting out those whose motivations and commitments lack clarity.

Summing-up: the emergence of online disseminators as credible sources of information draws attention to two important trends. First, it is evident that social media sites are now central to the circulation of information in the Syria and Iraq conflicts and amongst violent jihadis globally. Second, the popularity of disseminators reflect that jihadist groups have weakening control over how information about the conflict is being communicated to ‘foreign fighters,’ fans, and others.

Perhaps more energy therefore needs to be focused on manipulating this loss of control. It is evident that there is a wealth of information that can be collected from online open sources such as Twitter. By focusing on the material that is being shared and consumed by violent extremists, we may be better equipped to spot emerging trends, and ultimately produce a more effective strategy to combat violent (online) extremism.