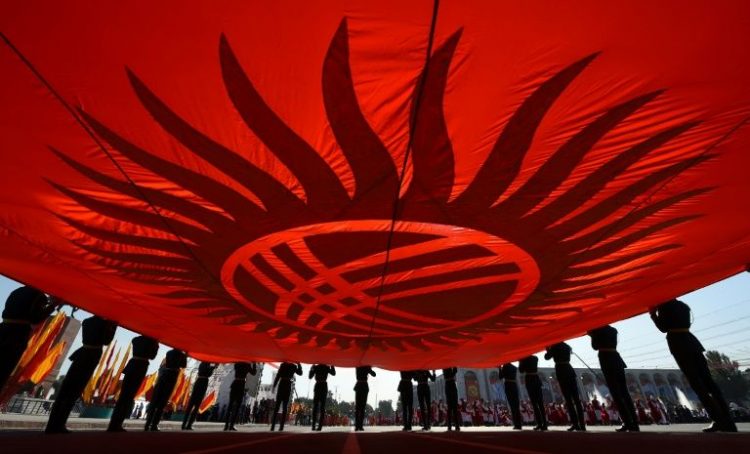 Since the 2000s, social networks have been widely used both as platform for like-minded users and an instrument for spreading information and ideas. But the rapid dissemination of facts and opinions also results in an uncontrollable stream of information. As a result, we are witnessing an increasing number of posts with negative content – from hate speech to open fomentation of online conflicts on ethnic grounds. And today, when expression online is under the control of law enforcement agencies, you have to take responsibility for your opinions not only according your society’s code of ethics, but also its laws. In Kyrgyzstan, those responsible for monitoring expression online can now charge someone with extremism without even conducting a forensic analysis of the offending statement.

“You call these stinky, boring and backwards Soviet buildings ‘architecture’? Those who regard those typical housing blocks as ‘architecture’ have no idea what architecture is. All you lovers of Soviet relics, why don’t you go to Russia, to somewhere in Siberia – where there’s plenty of this boring, poor and slave-like shit!”

This is a Facebook comment by Temirbek Bolotbek, a Bishkek university lecturer, who is now facing up to seven years in prison. The comments were posted in January 2018, under a post by Dina Maslova, chief editor of the media platform Kaktus.media. In her post, Maslova published an old photo of Soviet Bishkek, then Frunze, as she recalled how cozy she found the city as a child in Soviet times.

The publication sparked controversial reactions online: some focused on the differences between Soviet times and today, while others debated the merits of Soviet architecture. In late February, Kyrgyzstan’s State National Security Committee (GKNB) pressed charges against Bolotbek under Part 1 of Article 299 of the Criminal Code, “Incitement to ethnic, racial, religious or interregional hatred”. Article 299 carries a tariff of between four and seven years in prison.

Referring to an independent examination by professional linguists, Kyrgyz law enforcement deemed Bolotbek’s comments extremist. The defendant’s attorney Zhygral Babayev told me that his defendant’s words can in no way be interpreted as hostile – the defendant did not specify any race or nationality, nor was he addressing a specific group of people. Bolotbek himself regrets having started the polemic. During interview, he admitted that his words were rather unethical: “My comments were emotional. As a lecturer, I should have known better. However, I did not violate any laws, I merely expressed my opinion on Soviet architecture as someone who knows the subject well.”

After a close reading of the comments under the original post, one might have the impression that this was just an ordinary argument between so-called “pro-Russian” and “pro-Western” social media users in Kyrgyzstan. These kind of disputes were typical among Facebook users during the period of Kyrgyzstan’s accession to the Eurasian Economic Union (EAEU) a few years ago. But today, more and more people in Kyrgyzstan are facing charges under Article 299.

Temir Bolotbek isn’t the only Kyrgyz citizen who is facing prosecution for expressing his views online. In July 2017, Bishkek’s Pervomaysk District Court examined comments by city resident Nurbek Muktarov on Facebook – and found them extremist. Muktarov was sentenced to four years in a corrective labour colony under Article 299. Given that the court proceedings were closed to the public, Altynay Isayeva, a lawyer at the Media Policy Institute (MPI), was only able to reveal that Muktarov made a comment regarding the violence visited upon minorities in southern Kyrgyzstan during the 2010 revolution.

Indeed, Kyrgyz media experts are concerned about the absence of clear instructions that would help the authorities to differentiate between the ordinary opinions of frustrated users and comments of a destructive character. If the expression “why don’t you go to Russia” is regarded as an incitement to hatred, then Bolotbek should be joined by hundreds of other internet users who constantly post emotional content.

As one of the few lawyers who make legal evaluations of media content, Isayeva opposes detention for ambiguous statements. She is convinced that the Kyrgyz authorities – by trying to fight extremism through the use of dysfunctional or even borrowed laws – risk limiting freedom of speech guaranteed by the Constitution. Isayeva draws attention to the absence of concrete legal standards that would enable the authorities to distinguish between incitement to hatred and free expression of opinion. Likewise, she is concerned that, as things stand, the security services can interpret the law as they deem fit: “It is almost impossible to say clearly whether both of these cases (Bolotbek and Muktarov) involve incitement to ethnic conflicts.”

Begaym Usyonova, director of MPI, is also convinced that Article 299, under which Temirbek Bolotbek is facing prosecution, has been borrowed from the Russian Criminal Code, but, contrary to the latter, Kyrgyzstan omitted the penalties in the forms of fines or forced labour, as in the original version of the Russian law. “Drawing on the allegations of ‘social dangers posed by public speech,’ any citizen can now be held criminally liable for any kind of online statements,” Usyonova says. She emphasises that, over time, despite the tariffs being increased, Russia’s anti-extremism legislation has established a now unchangeable principle that permits a wide range of sanctions aside from imprisonment.

Rita Karasartova, director of the Institute of Public Analysis, also believes that gaps in legislation preclude lawful ways of tackling extremism. If the Kyrgyz authorities continue using Article 299 to detain citizens without submitting them to clear investigation, then Kyrgyzstan will soon be known as “a producer of extremists”: “All this activity has led to a point where, in the international arena, the Kyrgyz Republic has an image of a country where people are prepared and trained for extremist activity. We don’t want people to think this, it needs to stop.” Moreover, in 2016, the Russian media network Vesti, without reporting any factual evidence, named Kyrgyzstan a “producer” of ISIL fighters, while Kyrgyzstan, together with many other countries, has recognised this organisation as a terrorist one. After a heated reaction from Kyrgyzstan, the editorial office of Vesti changed the headline of their news story.

Despite warnings from human rights activists about how careless governmental services are neglecting people’s lives, journalist Kayrat Dzhaparov justifies the government’s actions: “Publications on social networks are having a significant impact, which is why any callers for religious or national discord must be held accountable. Commenters aren’t publishing these views for no reason at all, but because they want to open up a debate.”

It is still unclear which criteria the GKNB uses to initiate criminal proceedings under Article 299, but you could say that Tattygul Dootalyeva, a lecturer at Kyrgyz Medical Academy, got lucky in January 2017. The GKNB issued a warning after she published a Facebook post which accumulated thousands of hostile comments. Dootalyeva dedicated her post to the 40 people who died in the January 2017 plane crash outside Bishkek, where she wrote that the crash was part of a process of “natural selection”, by which she implied that, because the plane crashed into allegedly illegal housing built by immigrants from southern Kyrgyzstan, their deaths were somehow justified.

After the incident, Dootalyeva was fired from the institute where she worked, while GKNB summoned hee for interrogation and publicly warned her that any repeated attempts at posting on the subject would lead to her being prosecuted for “inciting interregional hatred”. Just like in the previous cases, local media experts did not find any incitement to hatred in Dootalyeva’s post: “Her words did not involve any direct intentions nor incitement to enmity, she was not calling anyone to action, she was not trying to provoke anyone on national, racial nor religious grounds; she was not trying to humiliate the dignity of any ethnic group; nor was she trying to demonstrate someone’s superiority or deficiency on the grounds of religion, nationality, or class.” They also deemed Dootalyeva’s post as unethical and unacceptable from a moral standpoint.

In May 2018, the United Nations Human Rights Committee recommended that the Kyrgyz government take necessary action to combat racist media coverage and incidents of incitement to hatred – including by politicians and other public figures. “Certain news media content, as well as statements made by some politicians and public figures, are inciting enmity towards ethnic minorities,” warned the Committee’s report. The Committee also suggested speeding up the adoption of anti-discrimination legislation and promote it widely through the news media.

According to UN experts, the internet has not only widened the possibilities of freedom of expression, it also affected the distribution of nationalist rhetoric. However, the experts indicated that Kyrgyz legislation is still unable to distinguish between two types of online content: negative and illegal. Here then, public education plays an important role in the fight against racism, and, according to the Committee, the Kyrgyz government is failing at this fight, while political, social, and cultural equalities are guaranteed to ethnic minorities by the Constitution.

Indeed, debates on social networks can often provoke conflict. In an interview to Kyrgyz news agency Azattyk, journalist Naryn Aiyp warned about increased expressions of nationalism on Kyrgyz Facebook, yet law enforcement pressed charges against journalist Uglubek Babakulov for an article in which he tried to notify state security of how one online community was actively spreading hateful messages about relations between Uzbek and Kyrgyz residents of the southern city of Osh, an epicentre of the 2010 violence that followed the revolution. But the GKNB considered that Babakulov’s article contained an “incitement to inter-ethnic conflict”, and pressed charges against him. He now lives abroad.

Meanwhile, Temir Bolotbek hopes to be acquitted in court and promises to abstain from emotional comments on social networks. After acquiring nationwide fame for his biting criticism, Babakulov has now disappeared from Kyrgyz media altogether. It turns out that, despite the fact that the freedoms of speech and expression are guaranteed by Article 31 of the Constitution of the Kyrgyz Republic, we can see attempts to suppress certain elements of freedom of speech online under the pretext of “threats to society”. Intentional or inadvertent, these efforts by Kyrgyz security services are pushing people to self-censorship.

Elnura Alkanova is an independent journalist specialising in corruption investigations. She is the winner of several international awards in the field of investigative journalism.