We (myself and Ana-Maria Bliuc) just published a brief research-paper in the Italian magazine “Security, Terrorism and Society“. We used the computerized text analysis program LIWC (Linguistic Inquiry and Word Count) to investigate the evolution of the language across the first 11 Issues of Dabiq.

Our paper shows ISIS’ increasing concern with females. This is especially important because it shows that ISIS needs to attract not only fighters but also women in order to create a society that is not only composed by warriors but also by families, where people can live an “ordinary” life.  This is a cornerstone of ISIS “utopia”, which is a powerful radicalisation motive. The next figure shows the increased concern with females in ISIS language. 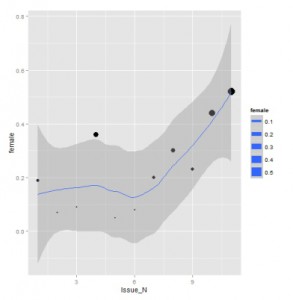 Additionally, our analysis shows that ISIS increased its use of internet jargon (for example abbreviations like “btw”, “lol”, thx”). We believe that this suggests that ISIS complies with the requirements of the internet environment, and aims to connect with the identities of young individuals. The next figure shows the increase in “net-speak” in ISIS language. 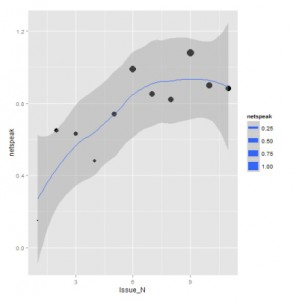 We believe that the analysis of ISIS language with LIWC categories is particularly interesting because it offers insights about the motives, emotions and concerns of the terrorist group. Research in the field of psychology of political leadership showed that the success of a leader depends on a match between the personal characteristics, the historical context and the followers’ psychological characteristics. The psychological structures of a text can generate identification in the audiences that recognize themselves in such structures and motives: the fact that ISIS is more concerned about females, means for example that ISIS is trying to connect with females and with people concerned with females. The fact that ISIS uses more “net-speak” means that the groups wants to connect with people who use the same language.

This is just a descriptive research that we hope can generate discussion. More research is needed in this area: we (myself and Ana-Maria) conducted more studies on ISIS language that are under review and will (hopefully) appear soon on this blog.

Matteo Vergani is a postdoctoral researcher at Deakin University – Alfred Deakin Institute for Citizenship and Globalisation. He is passionate about political violence, its causes, its impact on society, and the study of what could prevent it. You can follow him on Twitter: @teoverga

This post was first published on Matteo’s Blog on 12 January, 2016. Republished here with the author’s permission.