On this week’s blog, Professor Gabriel Weimann discusses his new book, published this month, From Theatres to Cyberspace: The Media and Terrorism which examines changing arenas of terrorist communication with a particular focus on emerging trends in the use of social media. 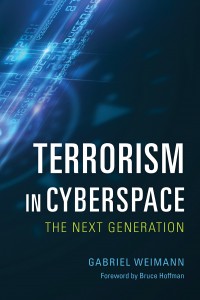 The seed was planted in 1972 in Munich, Germany. I was then a very young man, just released from three years of military service in the Israeli Army. I traveled to Europe and, as a tourist, found myself in Munich in the summer of 1972. The attraction was the Munich Olympics that turned out to be a tragedy: During the event, 11 members of the Israeli Olympic team were taken hostage and eventually killed, along with a German police officer, by the Palestinian terrorist group Black September. Like 800 million others in the world, I was glued to the television screen, watching what started as a dramatic thriller of kidnapping, terrorists and police forces, and ended as a sad and fatal tragedy. The entire world was watching, and I believe that this experience directed me, years later, to study terrorism and the media. Moreover, two decades later, when I wrote my book on the Theater of Terror (Weimann and Winn, 1994), I applied the metaphor of theater to the case of the 1972 Olympics. Thus, my experience as a spectator in the world audience of the Munich massacre probably led to my work as an academic researcher in the field of mass-mediated terrorism.

The emergence of media-oriented terrorism led several communication and terrorism scholars to re-conceptualize modern terrorism within the framework of symbolic communication theory. As Jenkins concluded in his analysis of international terrorism: “Terrorist attacks are often carefully choreographed to attract the attention of the electronic media and the international press. Taking and holding hostages increases the drama. The hostages themselves often mean nothing to the terrorists. Terrorism is aimed at the people watching, not at the actual victims. Terrorism is a theater” (Jenkins 1975: 4).

Several terrorist organizations realized the potentials of mass-mediated terrorism in terms of effectively reaching huge audiences. Our study (reported in Weimann & Winn 1994) examined 6,714 incidents of international terrorism from the late 1960s to the early 1990s. The analysis revealed a significant increase in terrorist acts that apply media-oriented considerations (in choice of victims, location, timing, form of action, contact with media, etc.). No wonder that Bell (1978) argued, “It has become more alluring for the frantic few to appear on the world stage of television than remain obscure guerrillas of the bush” (p. 89). Terrorist theory was gradually realizing the potential of the mass media. Acts of terrorism were more and more perceived as means of persuasion and psychological warfare, when the victim is “the skin on a drum beaten to achieve a calculated impact on a wider audience” (Schmid &de Graaf 1982, p. 14).

Recently, terrorists realized the potential and advantages of the new media, the online platforms and online social networks. Paradoxically, the most innovative network of communication developed by modern Western societies – the Internet, with its numerous online networking platforms – now serves the interests of the greatest foe of the West, namely international terrorism. Large or small, all terrorist groups have their own websites, forums, chatrooms, Facebook and Twitter accounts, YouTube and Instagram pages, using these platforms to spread propaganda, raise funds, seduce, radicalize, recruit and train members, communicate, and conspire, plan and launch attacks as described and analyzed in my book Terror on the Internet (Weimann, 2006).

What makes this new book, Terrorism in Cyberspace:The Next Generation, somewhat distinctive is that it follows up on my previous book and covers new emerging trends in online terrorism such as the use of social media, the virtual packs behind lone wolf terrorists, the new “narrowcasting” tactic used by terrorist groups to target specific sub-populations with their messages, the threat of cyberterrorism (as learned from the empirical evidence on the growing awareness and interest of terrorist groups in the use of cyber-attacks), and more. Based on a unique database collected for 16 years, archived, and coded for analysis, this book is unique in identifying the most recent trends in online terrorism and the near-future threats. Finally, the last part of the book presents the counter-measures best suited to respond to future threats, including the war of narratives, applying the notion of “noise” into the flow of terrorist online communication, and the private-public partnership (PPP) model.

Gabriel Weimann is professor of communication at the University of Haifa, Israel. He was a Fellow at the Wilson Center, Washington DC from 2013 to 2014 and is a member of VOX-Pol’s Academic Advisory Board.

Open, multi-stakeholder discussions necessary to tackle use of social media as a recruitment tool for radical groups

'Islamic State' has mastered the use of social media for recruitment: VOX-Pol Research Fellow Nico Prucha