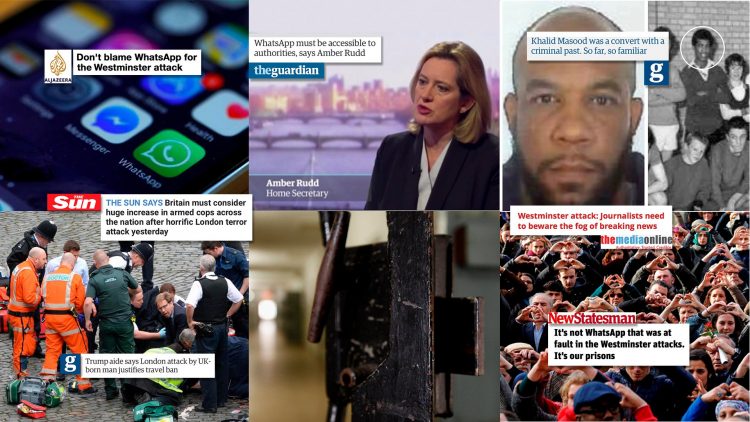 Those you fear may not be as dangerous as those who capitalise on your fear. This is what transpires from the on-going debate around mainstream media coverage of recent lone actor terrorist attacks. Regardless of the significance of social media propaganda in emerging forms of radicalisation, commentators are now reminding us of the role that traditional mass media continues to play in contemporary terrorism, almost twenty years after 9/11.

Admittedly, as a result of the so-called ‘Islamic State’s’ virtual communication and recruitment, the question of how attacks should be reported in traditional media has been progressively relegated to a position of secondary importance. Online propaganda is now considered a crucial independent variable to explain the process through which violent extremist groups consolidate their audience independently from mainstream political discourse.

The media frenzy following the 22 March, 2017 Westminster attack demonstrates, once again, how damaging the consequences of our fascination with such events can be. News outlets often fail to introduce critical debate around this issue, other than on the rare occasion of questionable journalistic practices becoming known to the public. Incidents like Channel 4 wrongly naming the Westminster attacker or Jamie Lorriman’s photograph of a witness wearing hijab generating hate speech on social media show how facts can be distorted in the way media representations are produced and received. It is only then, when the responsibility of the media is undeniable and after controversial statements have provided new grounds for populist identity politics that we come to ask ourselves the same question as BBC journalist Nicky Campbell quoting Margaret Thatcher: “Are we right to give terrorists the oxygen of publicity?”

It is only when the boundary between terrorist propaganda and factual journalism blurs that the question is raised in the public sphere, almost as a way to justify further media coverage. In May 2016, French broadcaster France 2 briefly asked jihadism expert Gilles Kepel to comment on the ethical responsibility of the media, after releasing a TV report including an exclusive interview with Jabhat al Nusrah member and former ISIS recruiter, Omar Omsen. The item, for which Omsen consented to be filmed, included flattering footage of his everyday life on the battlefield, accounts from his fellow recruits, and public statements in line with Jabhat al Nusrah’s official propaganda material.

The reason why such types of media coverage gain audience is because they respond to our irrational fascination for violent forms of disruptive subversion. Admittedly, one could argue that an entertaining media focus renders citizens potentially more engaged and alert about what constitutes the national and global public debate. However, the question still remains as to whether this does not somehow contribute to providing terrorist organisations with the credibility and legitimacy they do not deserve, to the detriment of their victims.

John Tulloch, formerly professor of journalism at the University of Lincoln and a survivor of the 7/7 London bombings, alluded to this question when describing how the coverage of the 2005 attacks led to intrusion of his privacy. Such intrusions, he suggested, had the potential to cause additional harm to victims of terrorist attacks.

Although debate and discussion around the media-terrorism nexus is certainly not new, commentators and policymakers have yet to imagine a legal framework to regulate the way violent political extremism and terrorism are reported in traditional mass media. This should be considered in conjunction with the security policies that are progressively applied to social media platforms in order to account for the joint impact of digital (bottom-up) and mainstream media.

Indeed, recent studies (Berthomet, 2016; Wiliam, 2016; Mahlouly, forthcoming VOX-Pol report) would suggest that mainstream media is likely to turn back into ISIS’ main communication channel, as a result of Internet censorship, online policing, and surveillance beginning to reduce the organisation’s visibility on social media.

However significant social media has become in advocating global jihad, IS’s communication strategy may increasingly depend on mass media coverage to maintain visibility outside of privacy-preserving platforms, such as Telegram. For this reason, social scientists and counter-radicalisation practitioners need to pay closer attention to the interplay between mainstream media and more participative communication platforms to better understand the type of media ecology constituting a favourable environment for violent extremism.

Dr. Dounia Mahlouly is a Research Associate at ICSR, working on VOX-Pol. She obtained her PhD from the University of Glasgow. Follow her on Twitter: @DouniaMahlouly.