RUSI Associate Fellow and King’s College researcher Elizabeth Pearson explores the role of gender and women in ‘Wilayat Twitter’, the online community of IS Twitter followers.

*Please note that there is no charge for attendance.

Using a unique dataset of more than 80 self-proclaiming supporters of ISIS on Twitter, this ongoing research aims to better understand the role of gender in these communities. ‘Gender’ refers not just to different behaviours of ‘men’ and ‘women’ online, but is evident in the ideology of movements, their structures and roles, in the identities of their supporters, and in who has legitimate access to violence. Using content harvested from Twitter throughout July 2015, Elizabeth is looking at differences in tweet content, style and tone between self-identifying men and women who use accounts to support ISIS. She has also been gathering basic quantitative information on their online behaviours. While this research is not yet at an end, initial findings confirm the different influences of men and women online, despite many shared narratives. Data also challenges the policy of ‘suspension’ and the taking down of accounts, suggesting this disruption has an important role in subsequent identity and community building online, which takes place in gendered ways.

The research is supported by the VOX-Pol Researcher Mobility Programme through which Elizabeth worked with Dr Maura Conway at Dublin City University on this project in July.

Elizabeth Pearson is a VOX-Pol Research Exchange student, an Associate Fellow at RUSI and an ESRC-funded MPhil/PhD researcher in Defence Studies at King’s College London. She specialises in gender and radicalisation, with an interest in both Islamist and far-right movements.

Elizabeth is also a member of the Nigeria Security Network and has written and commented on gender-based violence and Boko Haram for outlets including The International Business Times, African Arguments, War on the Rocks, The Huffington Post, AFP, The Washington Times,Newsweek, The Daily Mail, Daily Beast, Deutsche Welle, AFP, BBC World Service, BBC World, CKNW and BBC Radio Five Live, and RUSI Newsbrief.

She holds a Master’s degree in War Studies from King’s College London, where she was a Simon O’Dwyer Russell prize-winner (2013). Elizabeth also has a BA degree in German and Philosophy from Wadham College, Oxford University.

Elizabeth has a background in radio journalism at the BBC, with more than fifteen years’ experience in production, reporting and feature-making. She was a regular producer at BBC Radio Four’s Woman’s Hour programme, and has also worked in Current Affairs, at Radio Five Live and in BBC Radio News.

“...the Internet has played a pivotal role in bringing #Pakistan|is to foreign battlefields, highlighting the incre… https://t.co/rGes9aazUN
- Monday Jan 27 - 7:47am 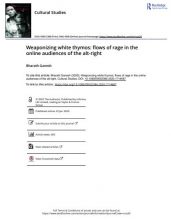 Weaponizing white thymos: flows of rage in the online audiences of the alt-right